Ive stated in the past that I absolutely love Thanksgiving. Its one of my favorite holidays, with no pressure to get the perfect gift or make huge romantic gestures. Instead it focuses on food and food and MORE FOOD. And though the turkey is the main course, its the sides, like the green bean casserole, mashed potatoes and homemade cranberry sauce that often what folks gravitate toward. And though Ive made different rolls for the holiday table including my potato rolls, these parker house rolls appear nearly as often. In fact, I love these fluffy buttery rolls so much that I pretty make them all year around. I cant believe it took me this long to share the recipe!

What are Parker House Rolls?

Traditional Parker House rolls are a slightly sweet yeasted raised roll that are usually half circles, formed by cutting the dough into circles, then folded over. Fannie Farmers Parker House dinner rolls recipe is probably has the most popular version out there, having been initially published in her 1896 Boston Cooking-School Cook Book, the original title of her famous Fannie Farmer Cookbook.

How do you make Parker House Rolls?

To make these Parker House Rolls, you first make the dough by warming the milk up on a stovetop. Dissolve yeast in it and then add warmed vegetable shortening, sugar, salt and an egg.

Then you knead the liquid into the flour using a stand mixer fitted with a dough hook. Let the dough rise and then roll out portions of the dough and cut into rectangles. Butter and fold the dough rectangles and place them in a pan.

Let the dough rise again. Or you can refrigerate overnight. Just bring the pan back to room temperature. Then bake and brush with more butter and a sprinkling of salt.

What makes this version different than the original Parker House Rolls?

There are numerous versions of the Parker House rolls but my version is adapted from a Bon Appetits Parker House roll recipe, where Ive streamlined the ingredients, clarified the steps, and adjusted the ingredients to make the dough easier to work with. Ive also reduce the sugar slightly as I prefer my rolls to not be as sweet as the Bon Appetit version, which uses more sugar.

The original (and most popular) Frannie Farmers Parker House Rolls doesnt have an egg in the original recipe and are shaped differently than the version that I make. I find the egg adds a tenderness that the original version doesnt have.

My version (as well as the Bon Appetit version) I dont cut the dough into circles, instead opting to cut them into rectangles and folding them over, then stacking them together in a pan. I love the way the bread nestles next to each other, creating soft billowy bread rolls similar to a pull apart roll. Cutting them into rectangles also means less scraps and less work when forming the rolls. No need to gather the scraps and reroll, which always leads to heavier rolls.

The folding over of the dough with the butter is still a nod to the original recipe, as well as ensures that every piece of bread has a little extra butter on the inside. And stacking them against each other means no roll unfolds in the rise and baking time, defeating all your hard work!

Finally, these Parker House dinner rolls have an extra brushing of butter on top (because you cant ever have enough butter) and a sprinkling of flaky salt on top to take it to the next level. The salt on top is optional but I cant imagine eating these without the salt on top!

Can you make rolls ahead?

You bet you can! There are two ways to make these rolls ahead of time and both are a super time saver, especially if you are looking to make these for a big holiday dinner or just want to simplify dinner.

You can make the dough, let them rise, and then then form the rolls and place them in the pan. At this point you need to let the rolls rise a second time, which will ensure they are extra fluffy and light. But you can turn these into overnight Parker House rolls by just covering them with plastic wrap and placing them in the fridge while you sleep. Move the rolls out onto the counter for about 60 to 90 minutes to bring them back to room temperature and let them rise a bit. Then bake as instructed!

Or you can just bake them completely, and then freeze them as is! Bake them but dont brush them with butter or sprinkle any salt on them. Let them cool completely and freeze them in the pan, tightly wrapped in plastic wrap after they have cooled or in a very large plastic resealable bag. Just bring them back out and place them on the counter for 2 hours before you want to serve them. Warm them up in the oven for 10 minutes on 350F and then brush them with melted butter and sprinkle of the salt. The rolls will keep fine in the freezer for up to a month.

How do you store leftover rolls?

You can store leftover Parker House rolls on the counter for up to 2 days. Just keep them tightly wrapped either in plastic wrap on in a resealable Ziploc bag. Dont refrigerate the rolls, as they will dry out. Keep in mind that day old rolls wont taste as good as fresh baked rolls. But if you warm them up again in the oven, and the brush them with a generous amount of butter, you probably wont notice!

You can also freeze the leftover rolls. I recommend breaking the rolls up into smaller individual rolls, then placing them in a gallon resealable Ziploc freezer bag. Having them already broken into individual rolls makes them easier to defrost and serve. Just leave them on the counter until they have thawed out, about 20 minutes. You can eat them at room temperature, but I prefer to reheat them in the oven or toaster oven for 5 minutes at 350F.

Can I substitute the vegetable shortening in these rolls for butter?

Yes you can. The shortening in these rolls gives a bounce and a fluffiness to the rolls that you just cant achieve with plain butter. But if you are adverse to shortening (and I get that, I use it very rarely), you can substitute 1/4 cup of butter for the shortening. Keep in mind the rolls will be slightly denser than the original recipe, but still pretty darn fantastic.

If you like these Parker House Rolls, check out some of other bread, rolls and buns recipes:

Even more recipes (from friends around the internet)

I have joined up with a bunch of blogger friends for a Friendsgiving Virtual Potluck! Be sure to check the recipes below out for wonderful Friendsgiving and Thanksgiving recipe and craft ideas!

Drinks
Spiced Pumpkin Margarita from Sharon of Cupcakes and Cutlery 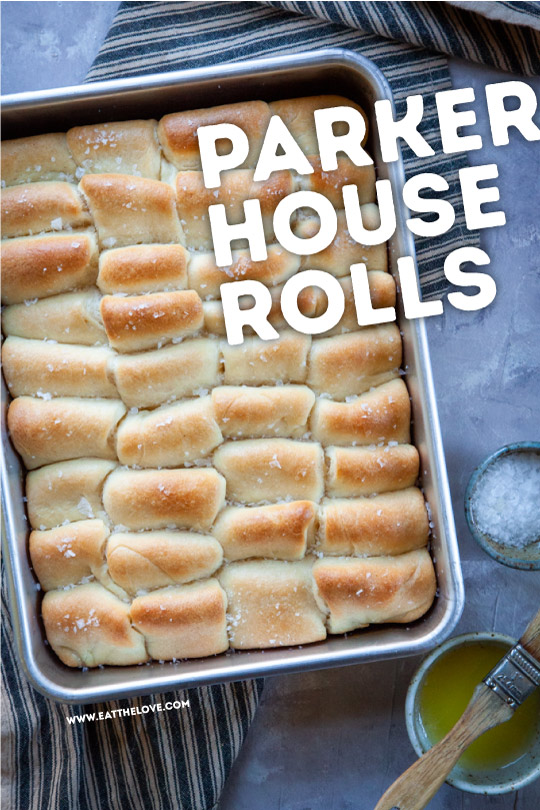 These classic dinner rolls are easier to make than you think, especially if you have a stand mixer fitted with a dough hook. This version streamlines the process even more and has you baking the folded rolls in a pan, with each roll touching each other. The result is a great pull apart style dinner roll that has a high buttery inner fluff to low outer crust ratio.
Course Side Dish
Cuisine American
Keyword bread, dinner roll, thanksgiving, yeast
Prep Time 15 minutes
Cook Time 30 minutes
Rest Time 2 hours
Servings 36
Calories 90kcal
Author Irvin