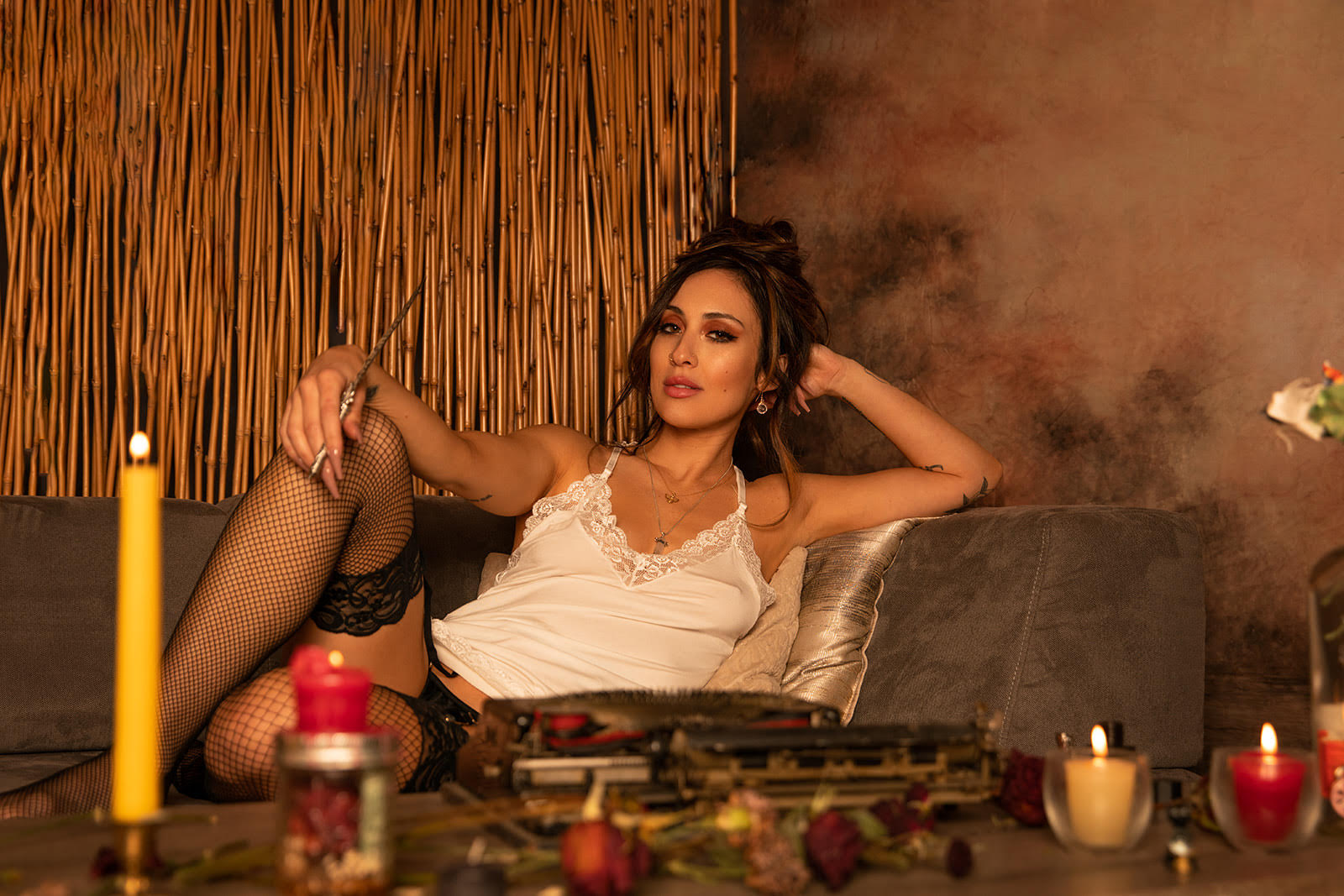 “Do something interesting,” the blonde woman whines at me from her spot at the tip rail.

At my strip club, stage sets are mandatory. Every couple hours the DJ calls your name through the speaker and you have to go dance on stage for three songs. You must remove your top by the third song, regardless of whether anyone is tipping. The blonde woman and her well-dressed husband have been seated smack in front of center stage for the past hour, and haven’t tipped anyone more than a few paltry dollars. The club is slow tonight, and they are the only people watching the stage. I’m two songs through my set, and I’ve just gotten topless.

The woman stares at me glassily, blue-eyed and expectant. Her large, diamond wedding ring twinkles in the disco lights as she sips her white wine. Her husband pulls out one dollar. She snatches it from him and waves it at me.

“I wanna see a trick!” she commands.

I don’t even fight the urge to roll my eyes. I extend my hand down to receive the cash, but she pulls it out of my reach, pointing at my g-string with her free hand.

“I wanna put it in there,” she fusses.

I know I’m on camera, so I can’t refuse her money. As I crouch down, I pull the strap of my panties away from my hip, making it possible for her to slide the single bill in with minimal contact. After she finally parts with her stupid, stanky dollar, she clumsily grabs my ass, despite my body language clearly disinviting her.

Women like this are a hazard of the trade. It’s well-known among strippers that a straight woman is likely to assume she can grope you without ever asking for your consent, or even offering you a tip. If a woman is at the club with her male partner, I don’t go anywhere near her, because I’ve learned over the years that the outcome is too unpredictable.

Of course, there are some straight women customers who are totally lovely, but it’s not a gamble I’m willing to take anymore. In private rooms with straight couples, many women have tried to have sex with me, assuming I’d be open to it without even asking me. The entitlement to my body, the lack of consideration that I may have boundaries, the assumption that I’d be available to indulge their lesbian sex fantasies…it’s all just so damn hetero of them.

Heteronormativity refers to the compulsory social rules, gender roles, and sexual behaviors associated with heterosexuality within a patriarchy. In our heteronormative culture, people in the sex trade are seen as sex objects, rather than individual human beings in a vastly diverse population performing a wide variety of services for pay.

Often, our customers assume that just because we’re in the sex industry, we’re available to fulfill any of their desires or fantasies. In my line of work as a stripper, I regularly encounter rich male customers who chat me up while flaunting their wealth, only to refuse to invest in any of my advertised services (lap dances, champagne rooms, and the entertaining conversation I just gave them).

Instead, they offer to pay me “double” if I come back to their hotel rooms and have sex. This is degrading and humiliating not because they proposition me for sex, but because they are willing to trick me into wasting my time on them. They approach me–a stripper–with their mind already made up that if I refuse to fuck them, which is a service explicitly outside the bounds of my job description, I won’t get paid for the time I’ve already invested entertaining them as customers who have voluntarily chosen to patronize a strip club instead of an escort service.

These assumptions that sex workers are boundariless sex objects don’t just stop with men. It doesn’t surprise me when straight women customers assume they can grope me onstage, or that I’ll fuck them in front of their husbands in a champagne room. Anyone participating, uncritically, in heteronormative relationship dynamics, is likely to violate the boundaries of a sex worker should they come into contact with one.

Ironically, some “straight” women who have been repressing queer desires see the whore as a workaround to actually confronting their own queerness. They assume they can use us for sexual gratification, because, that way, even if they claim a queer sexuality, they don’t have to grapple with what it would mean to fully claim a queer identity.

Heteronormativity does this really slick thing where it tries to convince us all that what makes a person queer is simply defined by who they have sex with. That’s why so many “straight” people only indulge in queer sex with sex workers; that way, they don’t have to participate in the monumental task of dismantling the privileges and protections heteronormativity affords them in their “real” life.

“Sex work is dangerous because of how you treat sex workers.” 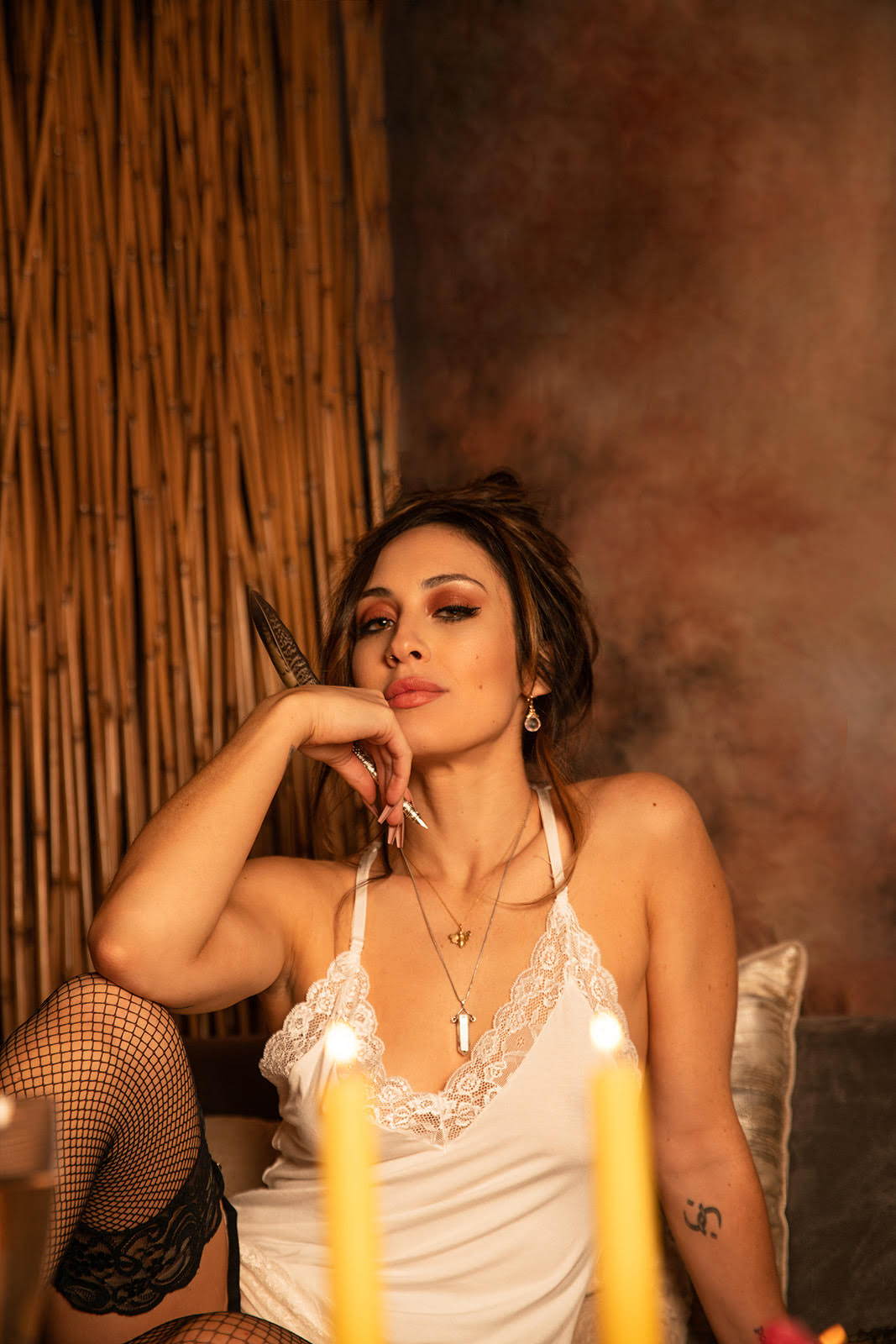 Newsflash: Groping is not a natural “hazard of the trade” or a complimentary service. (Photo: Katiria Concepcion)

Of course, some people have to keep their queer identities hidden for safety reasons. At one club, I had a customer who would come get lap dances from me after her shift in the kitchen at the restaurant next door. She was a working-class Chinese immigrant who, for complex family and cultural reasons, did not feel safe living openly as a queer person. She did what she had to do to survive, and was a very sweet customer–unlike a lot of the wealthy, married American women who have sexually harrassed me over the years in the presence of their husbands, exploiting their enormous privileges and the power gap between us. Yes, it’s true that in our anti-queer society many people have to hide their queerness. But it shouldn’t be at the expense of sex workers’ safety.

America has an ongoing legacy of conservative, white, cis male politicians who support anti-queer legislation, but turn out to be fucking male or transfemme sex workers behind closed doors. The argument that these politicians stay closeted because they’d otherwise “lose everything” is bullshit. These men’s denial of their own desires is not just about them. While I have compassion for their feelings of shame or fear, their privilege renders their feelings irrelevant.

What is relevant is their willingness to promote and uphold laws that oppress queers, whores, and femmes as a whole. Identity fragmentation is certainly a valid personal struggle, but it is not a valid reason to extend the arm of a violent, racist patriarchy into the lives, bank accounts, beds, and genitals of millions of people. From politicians to lawyers, bankers, and oil tycoons, the men who pay to fuck us in secret are also the ones who uphold the laws that keep us in danger.

At the time of this writing, throughout the world (except in New Zealand), most sex work is a crime. The strip club industry exploits us because it’s one of the only places we have some protection from police. Strippers pay the club to work there; not the other way around. What’s more, our customers spend tens of thousands per day, but we take home a tiny fraction of that money; the club keeps most of it. Strip clubs offer us just enough shelter from arrest, and just enough cash, that most of us have no choice but to swallow the bitter pill of injustice.

Whores’ status as criminals makes it easy for anyone to abuse us–not just men. When I talk about the power imbalances in the sex industry, well-meaning folks often propose that we need more women in charge of strip clubs. The idea is that if women were in management positions, the industry would be more equitable. That’s simply not true. Not only because women are well-capable of misogyny (as demonstrated by the gropey, high-society wives who plague strip clubs everywhere), but because the industry structure is trash.

First of all, like I said, strippers are some of the only sex workers who have any legal protection at all. So making our industry safer doesn’t do anything for the majority of whores, who work outside the strip club (largely due to clubs’ discriminatory hiring practices, which bar many fat people, trans people, older folks, undocumented immigrants, and BIPOC from attaining jobs).

If a customer is a big spender, and they feel entitled to molest me or verbally harass me, I know the club won’t protect me (regardless of the manager’s gender). I’m an expendable commodity. The club protects the customer; never the dancer. Strippers rarely speak up against personal or labor violations, not because we’re timid, but because we know the deck is stacked against us and our jobs are not secure. We regularly get fired for “complaining” about customers who sexually assault us or steal from us. This makes it even more infuriating when the customers who violate us are women, because it shows they don’t see us in themselves. Many women–especially those of the more privileged social classes–are convinced that we couldn’t possibly bear the torch of patriarchy, that we’re incapable of kindling the fires that burn so many of our own.

Every so often, when I speak openly online about the lack of labor protections in our industry, someone comments that I should unionize with the hoes at my club. Frankly, I have no desire to dedicate the amount of labor, effort, time, or risk that goes into unionizing. I completely support strippers who do feel called to fight that way, but nobody from a marginalized population should be expected to risk our own safety or livelihood to try and mitigate the injustices against us.

After I got fired from my hometown club in 2018 for getting too outspoken about labor and human rights violations, I made a conscious decision not to try and rock the boat from inside the industry again. Not only was it extremely precarious for me–it simply wasn’t working.

Now I choose to focus on lifting the opaque veil between sex workers’ knowledge of our own world, and the general public’s complete lack thereof. The gap between us and the rest of civilization is no accident. Sex workers are held hostage by society’s self-created forces majeures–namely capitalism, patriarchy, and white supremacy. So long as the global citizenry lacks understanding of the true nature of our struggle, they can’t fully empathize with it, even if they want to. We become pawns–a perpetual place to dump hatred against all women, femmes, and queers. So long as the whore is despised, the bloodsucking monster of misogyny has a food supply.

Customers who assault and harass us, like the blonde woman who felt entitled to grab my ass because she gave me $1, are a symptom of the patriarchal plague that keeps most genders marginalized and in a perpetual state of danger. For some women, femme, and queer readers, this might be the first time you’ve ever considered that we, ourselves, can perpetuate misogyny. If that’s the case, I’m grateful to be able to bring you into contact with this perspective. For many of us–sex workers or not–it can be really validating to recognize that we’ve endured misogynistic attacks from our own kind. It can also bring up feelings of shame, should we realize we may have actually also transgressed against others in this way. Either way, understanding the issue is a huge key to changing the circumstances moving forward.

It is my hope that you will continue to forge an ever-deepening comprehension of your own power within the strata of privilege and oppression created by our global caste systems. The more we understand about our positionality within them, the better we are able to deliberately pluck at the seams of the inequities that blanket our personal corner of this world.

So go forth, be merry, pay your whores well, and be really, really nice to us!