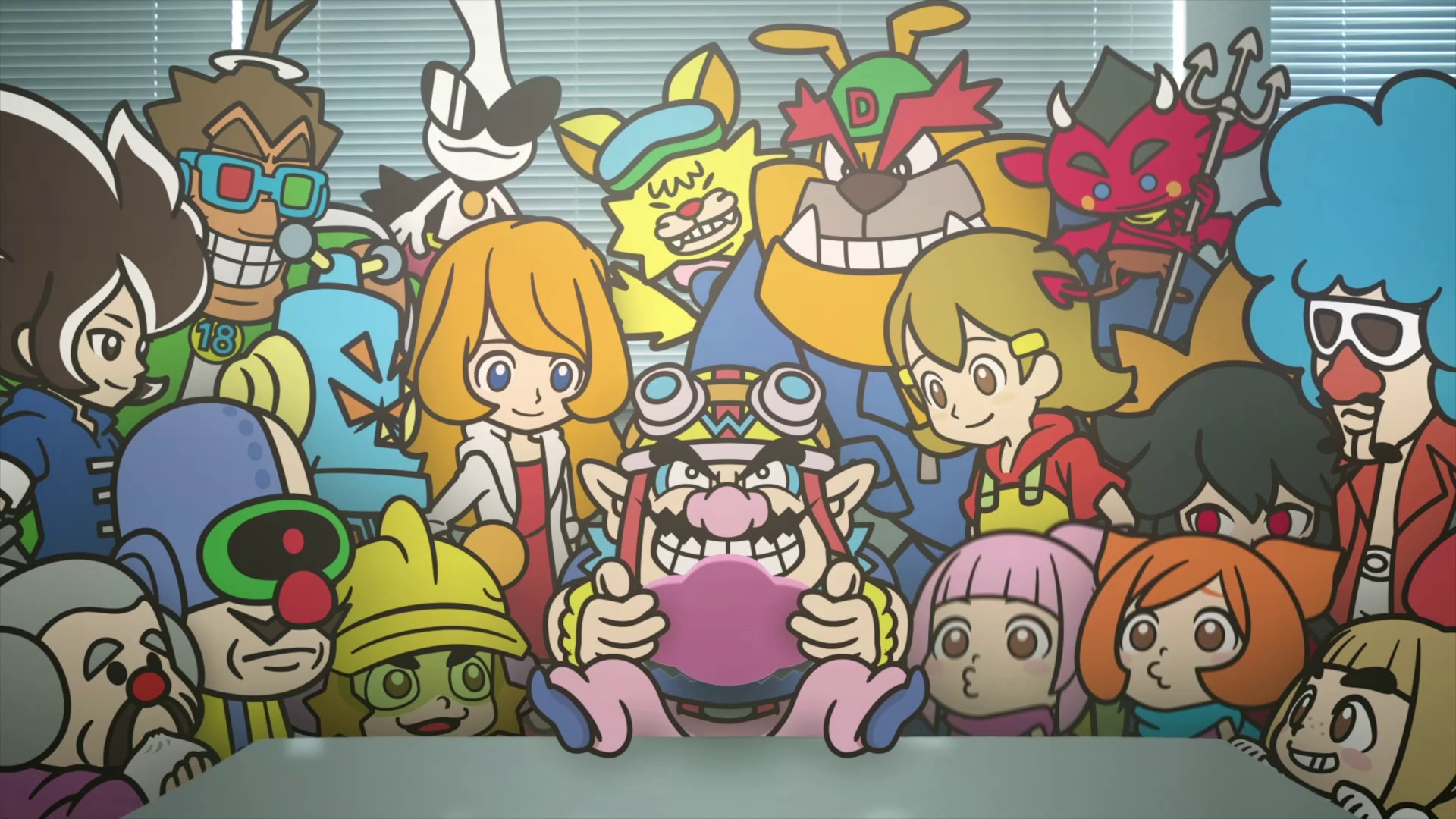 The experience of playing a Warioware game is unique among console experiences. Instead of presenting involved party games or puzzles that require critical thinking, dexterous mechanical reasoning, and reading comprehension, Warioware chucks players into a chaotic world where one-word commands, five-second-countdowns, and visual cues are all anyone needs to succeed.

At its best, the new Warioware: Get it Together! for the Nintendo Switch perfectly captures that frenetic microgame energy and guides players into a lizard-brained, reflexive state of play that's both reactive and oddly meditative. Its premise, that Wario and his employees at his game studio are trapped in a bugged version of their new game release and have to battle through their game to fix it, is an adequate backdrop for the hundreds of games packed into its main plot — but after a player comes down from the high of having played each game once, it's difficult to recapture the game-debugging fun in later plays. 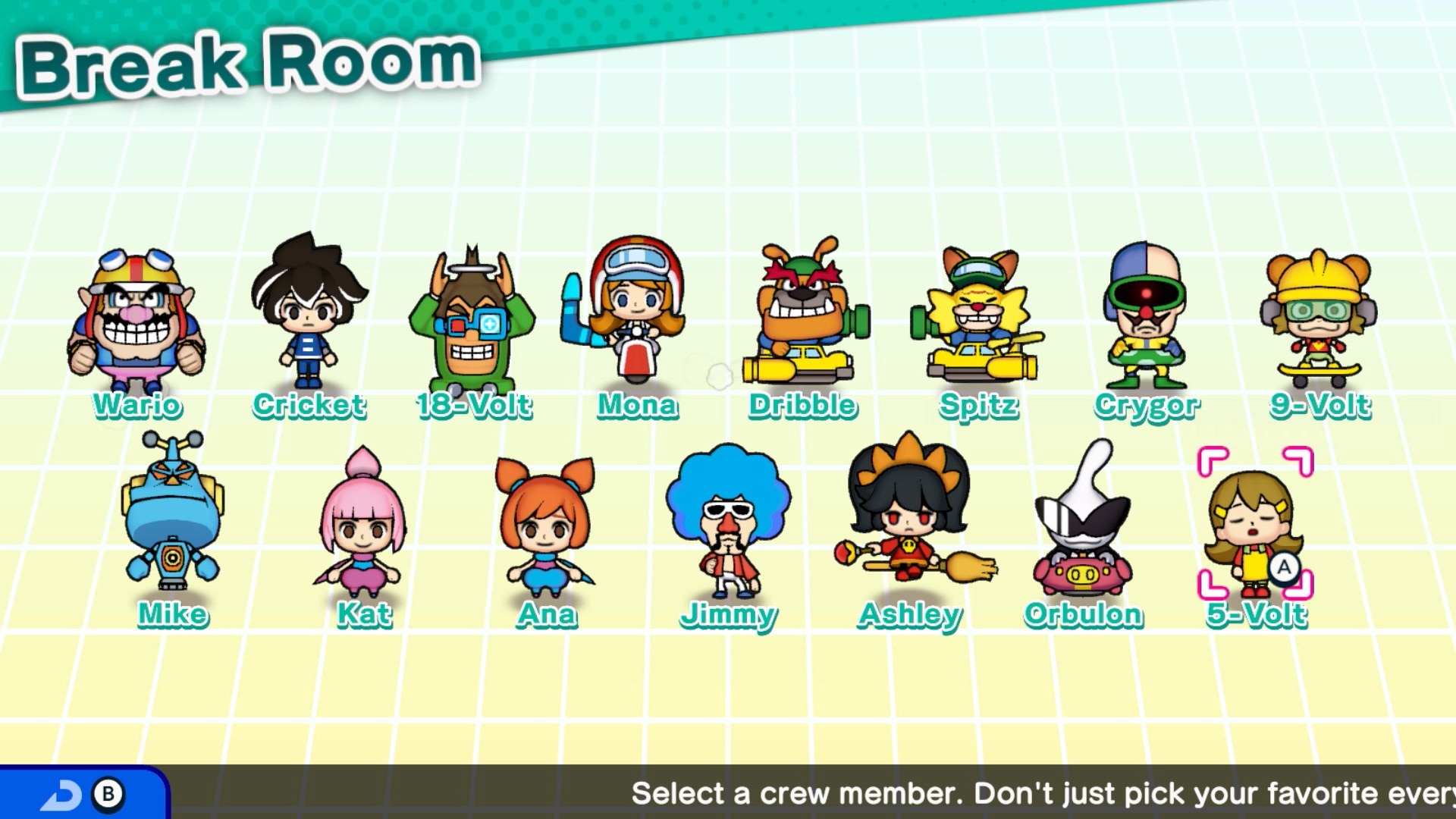 Sometimes a family is a game developer, a scientist, his robot, two ninja children, and an alien. Credit: Courtesy of nintendo

Unlike previous Warioware games, character selection is key in Warioware: Get it Together! Every member of Wario's team has a different power that makes them act differently in microgames, and the main thrust of the plot is discovering where in the game Wario's employees have scattered and how to use their individual strengths.

There's really only a handful of actions that are useful in the microgames, so most characters are a variation on one of four themes: flying, attacking, jumping, and throwing. Some of the characters (Wario, Mona, Ashley, Orbulon) combine two of those variations, and they are God-tier useful when it comes to solving microgames.

Other characters do a gimmicky version of one of those themes and they, with respect, belong crammed together in a clown car. These are characters like Kat and Ana, who jump continuously as if the ground is their personal trampoline and are difficult to control, 18-Volt, who is completely stationary but can toss CDs from his head (for some reason?), and Jimmy T, who just kind of disco-thrusts everywhere.

Welcome To The Stacked Arcade 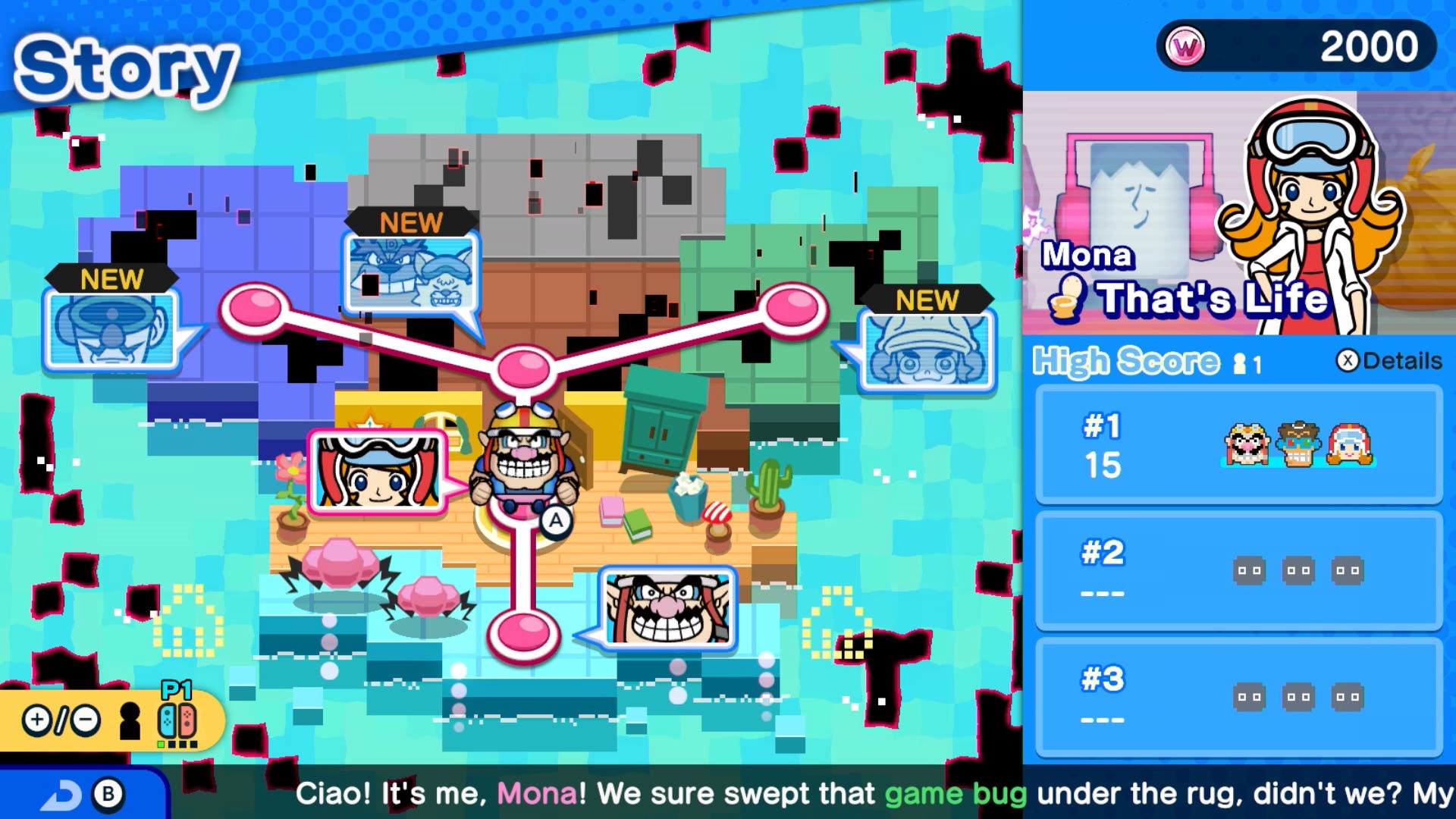 Look at all these levels! Credit: Courtesy of Nintendo

What partially redeems even the clown car characters is their introductions and individual level designs. Each character encountered in the Warioware: Get it Together! plot is introduced with a charming animated cinematic and a themed level that serves as the stage for a set of new microgames. These levels, which are meant to be the game levels each character designed for Wario's game, are wonderfully kinetic and eye-catching, with great music (including one sung-through vocal theme that is an indisputable bop) and strong visual cues for success or failure.

For example, Dr. Crygor's level is a lab where he manufactures cute robots that cheer when a player does well, Orbulon sets games in cultural landmarks from around the world, 9-Volt gets an objectively awesome Nintendo-themed level that brings in characters from Splatoon and Breath of the Wild, and so on. The microgames in each level all stick to their theme and are fun when played in rapid succession, but it's also fun to mix them up in later challenges that draw from all the characters' worlds.

Honey, I Shrunk The Games 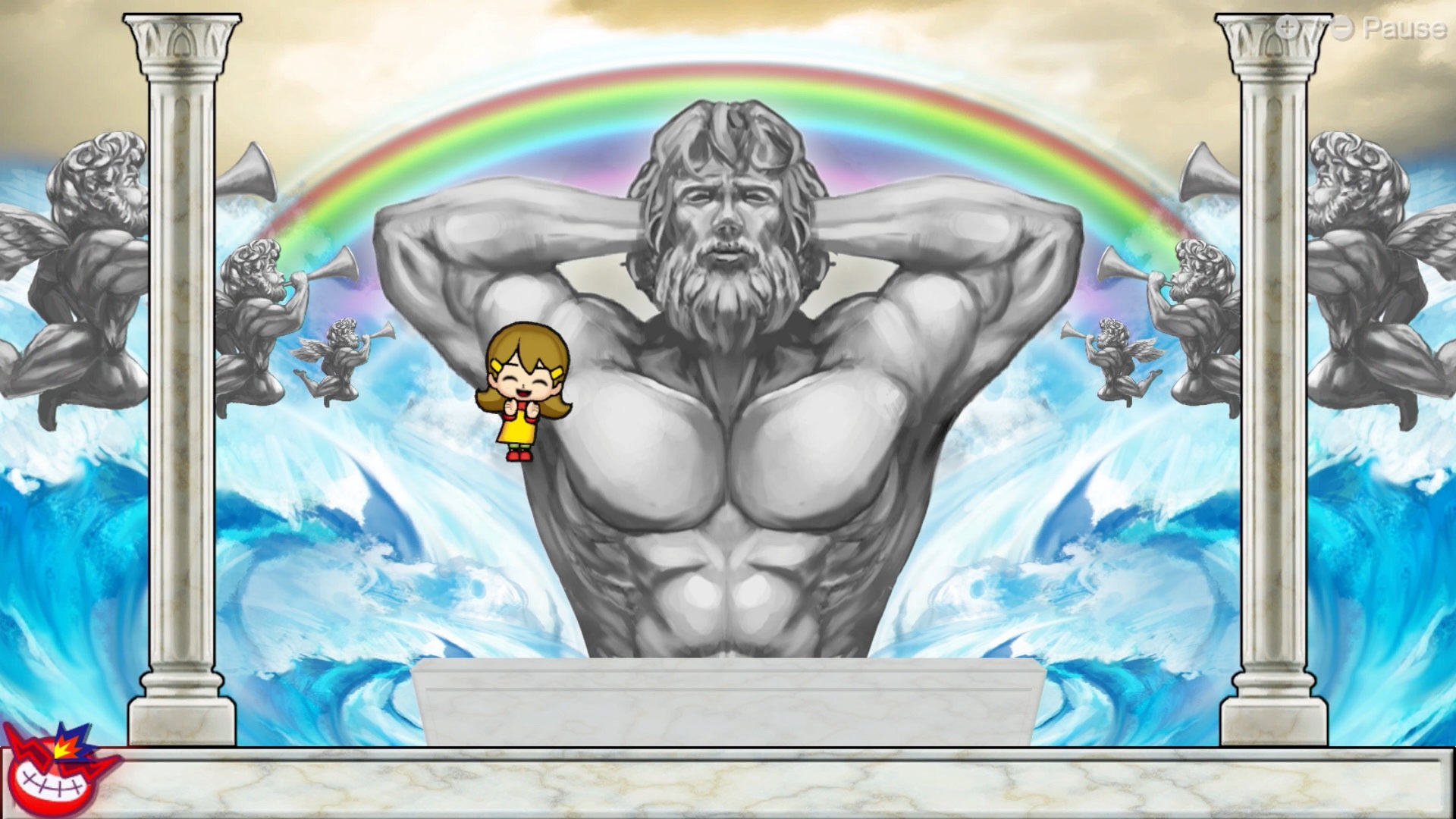 Smooth as a statue. Wait. Credit: Courtesy of Nintendo

The microgames themselves are wacky and chaotic as ever, ranging from hiding a cat turd in a litter box to plucking the armpit hair of a buff giant, though some of them are too vague in their one or two–word instructions and take a few tries to figure out what exactly the game wants you to do. The games' rapidfire pace requires instantaneous and often reflexive comprehension as opposed to intense puzzle solving, and building a long streak of wins in a row is incredibly satisfying. Even if you do whiff it on one game in the final stages of a level, the price for starting over is nil and starting from the point of loss is a cheap 100 coins.

Some microgames are better suited for characters with a particular skill set like flying or shooting upwards, which would be fine if it weren't borderline impossible to complete them with some of the other characters. Getting a bad roll that mismatches a character to the type of micrograms selected is a guaranteed loss, which makes those characters dead weight in a microgame level roster. Since Warioware: Get it Together! doesn't tell players which games they'll get in any given level, it eventually becomes useless to waste time stocking any of the clown car–tier characters and more likely that players will simply reuse the more mobile ones.

Players aiming for high scores and earning oodles of coins may enjoy later challenges, but those seeking novelty will get bored quickly. 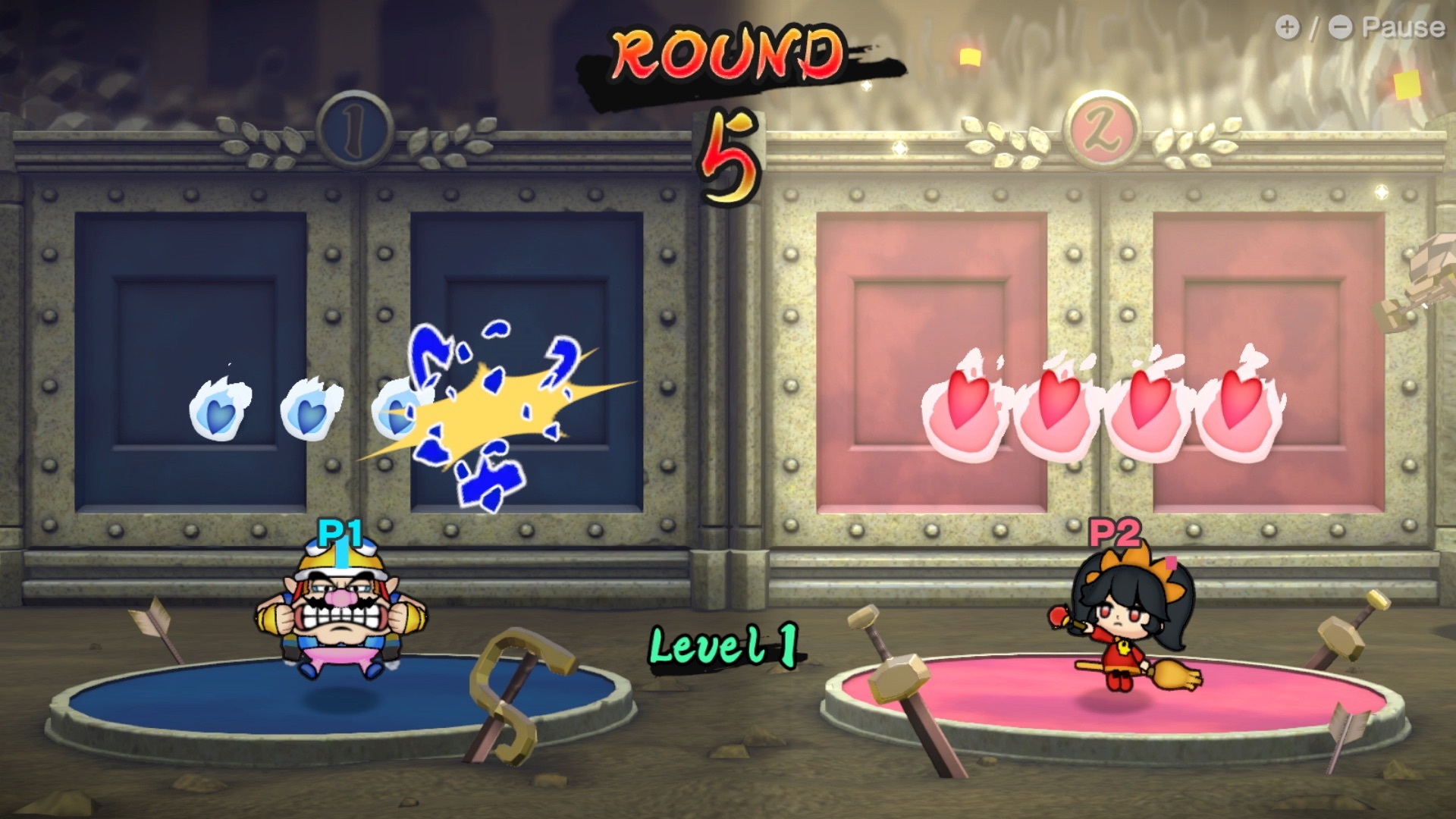 You're goin' down, Wario. Credit: Courtesy of Nintendo

Warioware: Get it Together! also offers a selection of multiplayer games for two-to-four players. Some of them, especially those that revolve around racing through the completion of microgames in competition with a friend, are solidly entertaining experiences that at least feel different every time you play them. Others, like a cooperative keepy-uppy game with a bouncing ball and an interminable side-scroller that involves picking up game contracts and avoiding evil pigs (?) are less replayable.

On the good side is Balloon Bang, which challenges one player to complete a microgame while the other attempts to inflate a giant balloon that could pop at any moment and is hilariously stressful, Puck 'er Up, which is a combination of air hockey and evil as players must score a goal for the chance to complete a microgame that their opponent can sabotage, and the two modes that allow players to go head-to-head in a microgame race (Duelius Maximus and Rising Star).

Those games have the most replay value, especially if you rotate in new friends when someone is knocked out, but even they lose their shine after a few rounds. After going through the entire Variety Pack roster of multiplayer games with the same friend, there isn't much motivation to go through and play them all again. That lack of impetus to keep going after you've seen everything at least once is the overarching issue with Warioware: Get it Together! Players aiming for high scores and earning oodles of coins may enjoy later challenges, but those seeking novelty will get bored quickly.

In The Endgame Now 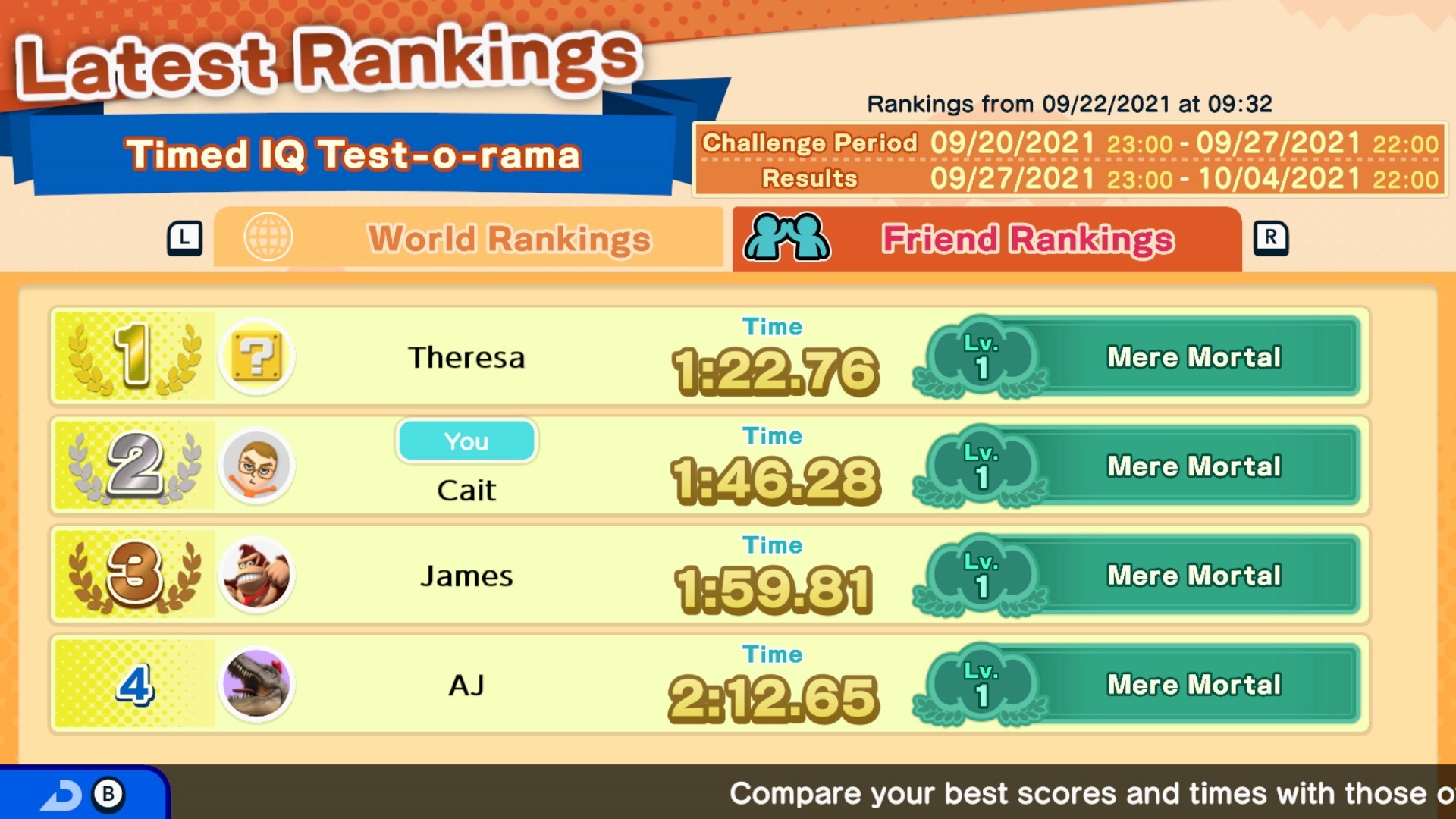 Fight your friends and family, if you like. Credit: courtesy of Nintendo

After completing the main plot of Warioware: Get it Together!, there's technically plenty for players to do. There's a big chunk of postgame content (which really just feels like the final levels of the game, just set after the credits), competing in the Wario Cup, and a whole convoluted system of using coins to buy "Prezzies'' to customize and level up characters, but the game doesn't give a good reason why anyone should bother going that hard on the endgame.

Again, some players thrive on racking up stars and high scores, and those players will love the Wario Cup and the new online Ranked Mode that allows them to compare scores with their friends via Nintendo Switch Online (subscription required), but for those who don't have a completionist bone in their body, this game feels kind of done when it's done.

It took maybe three hours to complete the main plot of Warioware: Get it Together!, and another one and a half to squeeze the remaining fun out of the multiplayer sections. Some people who get more serotonin out of completing fast microgames even if they've played them dozens of times before will get more use out of the game as a whole, but others will find that Warioware: Get it Together! is more of a toy than a game — you pick it up, see what it can do, and forget about it when something new comes out.

Warioware: Get it Together! is out on the Nintendo Switch.