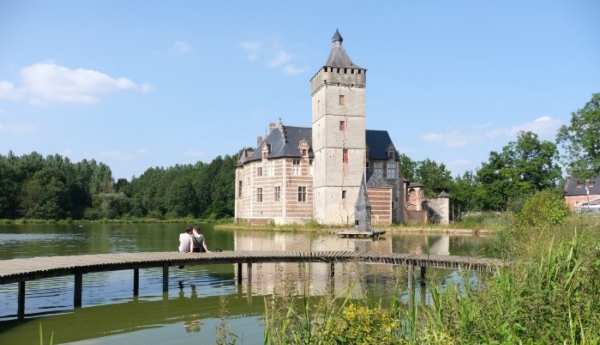 Unlocking vulnerability is hard. It’s something we usually avoid because it means opening yourself up to potential harm. The harm we fear from our vulnerability is not at all the same as physical injury.

However, it may help to think of an injury to your heart (your vulnerability) as a precious treasure within that you are hiding from the world.

Treasure, you think, doesn’t sound right. How can a vulnerable secret have any value to a couple?

Here is how. We all carry scars from times we were hurt as small children. Maybe the slight was tiny, or huge. Maybe an aunt fawned all over one child, but dismissed you — the step child, for example — when you too, needed some vital encouragement.

Big slights scar us even more. For example, you are a grandchild who was passed over for inheritance even though you “know” (or are sure you know) what gramps or gramma really wanted for you to have. That said, most hurts to our heart are not for material things, but the feelings of abandonment and alienation that we attach to them.

Becoming a Lady or Lord

Of course, not all our scars are from childhood. We also experience sensitive “regions” of the heart in adult living. If we are honest, we all admit that are hearts get broken at least once, and that also, we probably broke other people’s hearts. If not in romance, we all experience some version of feeling “injured,” in a work, home, or social situation.
Being a full human being requires that we grapple with our vulnerabilities. It is a secret treasure in the sense that you create trust with your love based on being equal partners in caring and sharing. Hiding this results in not being true to your own self. In a real sense, it’s a form of dishonesty, even when it is not intended as such.

Many men, especially, learn early on to hide their feelings. They lock their vulnerability in a hidden magna chamber deep inside. But just like a volcano, the feelings pent up inside are not gone, but merely repressed. The man, and sometimes woman, who hides their true feelings may or may not be aware of how often we do this.

What we hide from ourselves or others cannot free us. We cannot become lord of our self-lies, or lady of our hidden manner.

It is a human condition to not reveal what we know could hurt us. It remains in our unconscious until we make the time to address it.

However, the stereotype of the gushing, expressive women who shares too much also reveals that someone has a vulnerability. She (sometimes, he) is often wearing their “hearts on their sleeves.” Think about someone you know who seems overly eager to share, overly ready to bond over past injustices. These people too, are vulnerable in a different way. They seek out validation by finding someone with whom to commiserate.

It’s not unhealthy to share; it’s only unhealthy when it becomes the sole focus of any relationship.

In a social society this often leads to over-identification with a them versus us scenario. “All white people are supremacists,” or “All straight people are dicks.” Or “All men are pigs.” The key to addressing this type of vulnerability — to begin healing from it — is tricky.

If you are man whose wife experienced trauma, or assault, but you want her to reveal vulnerability without it becoming a total obsession, you must exhibit patience, encouragement, lots of validation, and mostly importantly, be ready to share your own vulnerability over this topic, or others. Ditto, the reverse.

It’s important to acknowledge someone’s vulnerability without trying to compete with it, or in any way come across as dismissive. This is one of the most difficult areas of coupledom.

Think of your union as a castle to be defended. You keep out attackers, but it’s so important to realize that always there is a secret agent within, a vulnerability, that must be admitted, soothed, nurtured, and protected.

The secret agent guards the treasure, and the secret only has value when it is shared equally. Maybe not all on the same day, as revelation is often as heavy as gold.

Picture a knight, or lady, of the realm that requires sensitive inclusion to keep as an ally. Also, make sure you don’t set yourself up as a “white knight, or for women, more often thought of as the “fix him” lady.

A red flag banner floats above the kingdom when a couple tries to compete to display that his, or her, role is the rescuer only — and never the rescued. Vulnerability requires establishing trust that both adults have equal responsibility to be there when needed.

It takes a lifetime of practice, and if you are honest, being vulnerable sometimes leads to conflict. This conflict is healthy if it is addressed in the right way. It is disastrous if it is buried, dismissed, talked over, or ignored.

One example is of your human sexuality; often times one partner’s needs are being ignored. Is one partner feeling better about himself, herself, because they are “fulfilled” by being the sacrificing one? That is, false pride accumulates on one side and self-care is dismissed. When this occurs, the “receiving” partner will eventually come to resent — not appreciate — being the one sacrificed for in an uneven bargain.

This is seen repeatedly in marriage counseling.

“I didn’t know you felt that way” is heard again and again. It shows that someone hid a vulnerability, and it is often a dagger thrust to someone’s heart.

The moat of mistrust

Many couples fall into mistrust not in one fell swoop into the moat, but in incremental inching toward it. To recognize when you and your partner are inching toward mistrust, check in frequently to your own body, mind, feelings, and more.

What is it you are afraid to say? What topic must be tip-toed around, or requires that you walk on eggshells? What comes up again and again in a conflict is a clue to what vulnerability needs to be let out into the healing light of day.

The rewards revealed are trust, tenderness, and comprehension of your partner. They should not be according to gender, roles, or sex. A full human adult must be willing to be both vulnerable, and a healer for a vulnerable fellow human being.

The rewards are not always shiny, or even ostentatiously impressive. They are the everyday rewards of treasuring and protecting a human heart.

The post Vulnerability Is a Couples’ Castle Treasure. Find It. appeared first on The Good Men Project.