When I was a teenager, my oldest brother Cole got married to a woman had become the yin to his yang, the butter to his toast, and the apple of his eye: Marianne. Our whole family was drawn to her energy, sense of humor, wit, and generosity, and we were awed by her many talents too!

She was a skilled seamstress, and once their daughter Julia started ballet, she sewed her some of the most beautiful and intricate ballet costumes I’d ever seen. Marianne was an equally skilled cook too, and we often argued over who would get the last of the delicious sides and desserts she would bring to family dinners.

Marianne was only in early fifties when she passed away after a sudden aneurysm in 2007. It was devastating to lose a member of our family like that, but I’ll always cherish my memories of her (especially her infectious laugh!) and the numerous delicious recipes she shared with us over the years.

It’s Not JUST A Spinach Salad…

One of the things I like most about this particular version of spinach salad is how timeless it feels. It never feels dated or tired, and it’s always the first salad to disappear when I bring it to family dinners and potlucks.

When you combine the creamy cottage cheese, the sweet and tangy dressing, salty bacon pieces, and tender greens, this salad becomes something more than the sum of its parts. It’s a food-based alchemy beyond my own comprehension, and something you simply need to experience for yourself! :-)

While this salad is a staple for us during the holidays (it’s a mainstay of my tried and true holiday dinner menu), it’s also delicious any time of year! I’m so excited about being able to gather with friends and family again this summer, and you can bet this salad will be on the food table!

How To Make Marianne’s Spinach Salad

Start by rinsing the spinach and lettuce and patting them dry with a clean towel. (You can remove the stems from the spinach at this point if they seem particularly fibrous, but I don’t usually bother.)

Roughly chop the lettuce, then place the spinach leaves and chopped lettuce in a large salad bowl. Pile the Swiss cheese, crumbled bacon, sliced mushrooms, and sliced red onions on top of the greens.

In a separate bowl, prepare the dressing by whisking the oil, vinegar, mustard, poppy seeds, sugar, and salt together until combined.

If You’re Serving It Immediately

Finish the salad by pouring the cottage cheese and prepared salad dressing over the top of the other ingredients, then toss and serve.

If You’re Serving It Later

If you’ll be serving the salad later, cover the salad bowl tightly with plastic wrap, transfer the dressing to an airtight container, and store both in your fridge. Just before serving, top the salad with the cottage cheese and dressing and toss it all together.

What’s your favorite kind of salad? 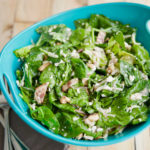 With its combination of sweet, salty, tangy, and creamy flavors, this unique and crave-worthy salad has a little something for everyone!
Course Salad, Side Dish
Cuisine American
Prep Time 15 minutes
Total Time 15 minutes
Servings 12 people
Calories 501kcal
Author Jill Nystul