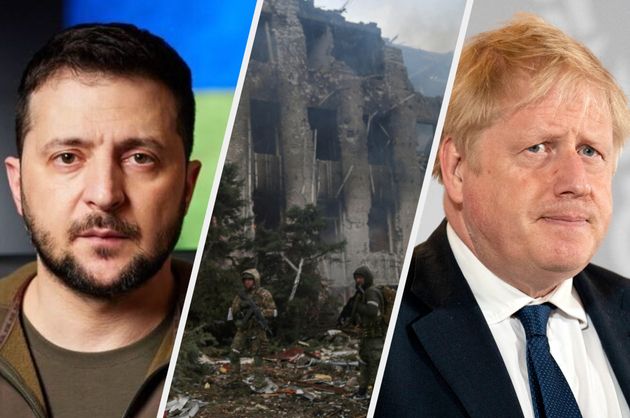 Is the west doing enough to help Ukraine?

As the war enters its third month, it’s clear the Russian invasion has not gone entirely to plan – but that doesn’t mean victory for the Ukrainian resistance is on the horizon.

Further horrors have been unfolding in the east of Ukraine recently, particularly in the besieged city of Mariupol, suggesting Russia has no intention of giving up or going quietly.

The Ukrainian president has laid out exactly the kind of help the country needs from the west to prevent the war from spilling over into the rest of Europe. So will Nato step up, or will it continue holding back?

The war took a turn for the worse this week

Russia has focused its efforts on the east of Ukraine, while its attacks become more merciless.

Newly released satellite images suggest haunting mass graves have been dug near the Ukrainian port city of Mariupol, which has been under siege for more than a month. The graves could hold as many as 9,000 bodies according to the local authorities.

Around three-quarters of Mariupol’s residents have already fled, and a shocking 20,000 civilians are estimated to have been killed.

Despite all of this, Ukrainian forces allege they are still in control of the city – even as Russia declares its first substantial victory in the war.

Russian president Vladimir Putin previously told the forces in the area they had to either surrender or die but he has since called off an attack on the final stronghold, a steel mill where around 2,000 Ukrainian fighters are reportedly hiding.

Instead, he ordered such an unshakable blockade of the plant “so that a fly can’t get through”, which gave the Kremlin a chance to declare a win without significant casualities.

The city is a significant battleground in the war because it is the last hurdle in Moscow’s bid to create a land bridge between its territories in the eastern Donbas region and the Crimean Peninsula.

The Ministry of Defence has warned that Putin’s decision to blockade the steel plant “likely indicates a desire to contain Ukrainian resistance in Mariupol” so the Russian forces can be spread across the east of the country.

Meanwhile, eastern Donbas still faces intense shelling by the Russians, even as its troops “are still suffering from losses sustained earlier in the conflict”.

Find out more about the UK government's response: https://t.co/UuvjA2vlqo

As the war continues to escalate, he explains: “What we’re seeing is incredibly harrowing, beyond comprehension.

“In not far off 17 years in counterterrorism, (it is) some of the worst possible footage you could imagine seeing.”

He said it is possible that he has seen evidence of war crimes in these referrals, along with evidence of “other international crimes”.

So what kind of help does Ukraine want?

The main request coming from Ukraine now is for more money.

Ukrainian president Volodymyr Zelenskyy told the World Bank and IMF that the country needs $7 billion (£5.4 billion) per month to supplement its losses caused by Russia.

It comes after the country has already suffered around $60 billion (£46.6 billion) in physical damage from the Russian invasion.

He explained: “We will need hundreds of billions of dollars to rebuild all this later and recover from this war.”

The Ukrainian president also called for Russia to be excluded from the World Bank and IMF, saying such bodies are “definitely not the place for a country which is trying to ruin the lives of its neighbours”.

Ukraine used to want to join Nato so that its forces would help defend the country, but it has since abandoned this effort.

In mid-March, Zelenskyy said: “Ukraine is not a member of Nato. We understand that. We have heard for years that the doors were open, but we also heard that we could not join. It’s a truth and it must be recognised.”

Ukraine used to plead for a no-fly zone, but to the country’s disappointment, this was rejected by the west over fears it would be seen as an escalation of tensions with Russia and officially pull Nato into the war.

Instead, Zelenskyy now asks for weapons which are “comparable” with Moscow’s, including fighter jets.

The mayor of Mariupol, Vadym Boychenko, has also called for more humanitarian corridors, explaining: “We need only one thing – the full evacuation of the population. About 100,000 people remain in Mariupol.” 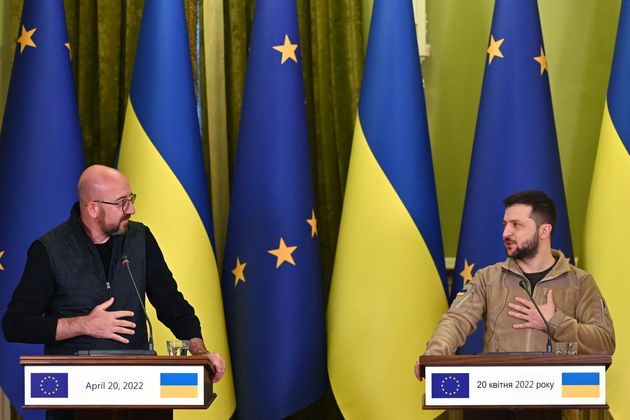 President of the European Council Charles Michel in a shared press conference with Ukrainian president Volodymyr Zelensky this week.

So what is the west actually doing?

The UK supplied Kyiv with 4,000 anti-tank weapons and anti-tank Javelin missiles, while another batch of 6,000 firearms is on its way now.

Around £25 million in financial support was announced in March, along with body armour, helmets and combat boots.

The US and the EU have pledged to send more weapons, while France has sent £83 million worth of equipment.

Canada, Norway and even Sweden – famously neutral – have chipped in too to support Ukraine with weapons.

Since Zelenskyy’s plea, the US has promised to pass an extra $800 million (£615 million) to supply Ukraine with more equipment, ammunition and drones while. The UK is now training some Ukrainian soldiers to use armoured vehicles.

Boris Johnson said earlier this week: “They need support with more artillery, that is what we will be giving them.”

The west has been extremely reluctant to interfere with the war out of fear that the war would escalate.

But, critics claim what Ukraine’s allies have offered so far is simply not enough.

Tory MP Tobias Ellwood told Radio 4′s Today programme: “The bigger question, not answered by Nato or indeed us, is what does success look like?

“We are doing enough to prevent Ukraine from losing but not enough to ensure they win.

“So what does our long-term mission objective look like? Is it pushing Russia back to pre-February lines or is it liberating the entire Donbas region? That’s absolutely critical in how we choose to up-arm the Ukrainians.”

He said there was an “absence of overall strategy” on how to end the war from Nato, and warned that he believes Putin will not stop his attack unless he is stopped.

Now more than five million Ukrainian refugees have now fled from the country, primarily to the rest of Europe, there is also an argument that the west is already involved.

Russian propagandists have already claimed that “World War 3” has started and that Russia is “fighting Nato”.

The Kremlin has even warned Washington recently that continued military aid could lead to “unpredictable consequences”.

Asked if the west has done enough to help Ukraine, he told French broadcaster France24: “Very bluntly, and that is my personal opinion, no, not since 2014.

“Ukraine is paying now for our desire not to escalate since 2014.”

He said that while the UK and the US’ actions now “have helped massively”, the influx of new materials has come at a time when both sides are exhausted.

“Will Ukraine have time to integrate this new equipment before utter exhaustion? I don’t know.”

He concluded that Nato, which calls itself the “most powerful alliance in history”, should not be “frightened” of Putin and “cower” in the face of the potential “consequences”. 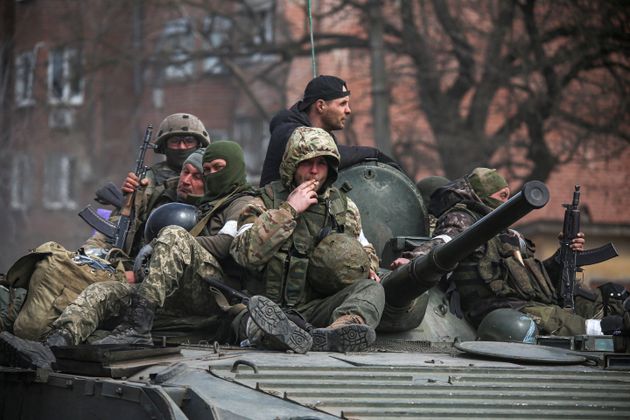 Service members of pro-Russian troops are seen atop of an armoured vehicle in the southern port city of Mariupol.