Your cart
The statutes disappeared the same way they appeared, in an instant. While they were on Earth, they caused confusion and destruction without ever lifting a finger. Well, that's not exactly true. Part of their impact was the untimely death of April May: a young woman who stumbled into their path and named them the Carls, gaining viral fame and putting herself in the middle of an avalanche of conspiracy theories.
Now, the world is as confused as ever. Andy has picked up April's mantle of fame, speaking at conferences and online about the world post-Carls; Maya, ravaged by grief, begins to follow a string of mysteries that she is convinced will lead her to April; and Miranda infiltrates a new scientific operation . . . one that might have repercussions beyond anyone's comprehension.
As they each get further down their own paths, a series of clues arrive - mysterious books that seem to predict the future and control the actions of their readers - which seem to suggest April may be very much alive . . . But there's a new threat. A growing force that wants to control our reality.
Did the Carls ever really leave us, and what happens if they're here to stay? 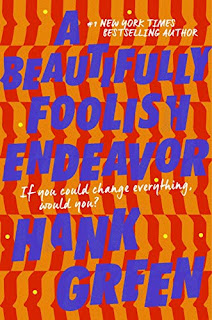 Review: This book was very easy to get straight into because it picks up right where an absolutely remarkable things ends. We have some explanation of the time we've missed but then we get to interact with some of the same characters from the first novel and we get some answers that the previous novel questioned straight away. The other things that sucks you right into this reasonably long book right from the word go is the way it is written it sometimes speaks straight to the audience as it is kind of a book within a book and so you have to sit up and pay attention.
This book is definitely more detail heavy that its predecessor. You absolutely have to concentrate the whole time you're reading it. I read this book on audio and so sometimes I would be doing something like driving at the same time and miss a detail and have to put it back to find out what I missed. I think this previous novel was a decent introduction to this world that was easy to access for those of us who don't normally read sci-fi novels.
I loved Maya as a character in the previous novel so I was happy to have her be a big part of this book. I think she is a great character because she is easy to relate to and I feel like I would definitely follow her on social media. She has a determination about he that is easy to get on board with and so I enjoyed getting to know her a little better in this book.
Just like the first book, this novel has a big dollop of geek culture assuming a prior knowledge of certain technology, playing with words and being aware o online communities. Like the first novel, this one also does a great job of mixing in social commentary, tackling guns, racism, social media and getting absorbed in that world. The audiobook has a great interview in the form of an authors note and bonus content at the end of the book that does a great job of explaining this even more.
I think because of the detail heavy nature of this book and also the fact that it is reasonably long, I didn't enjoy this one as much as the first April May/Carl novel but I would definitely carry on with the series if there were to be more books published. I do recommend the audio if you are able to access books in that form but I would also love to have a flick through the physical book to see if I missed anything whilst listening.
To order your copy now, just click the link: UK or US
Share Share on Facebook Tweet Tweet on Twitter Pin it Pin on Pinterest
← Back to Feed