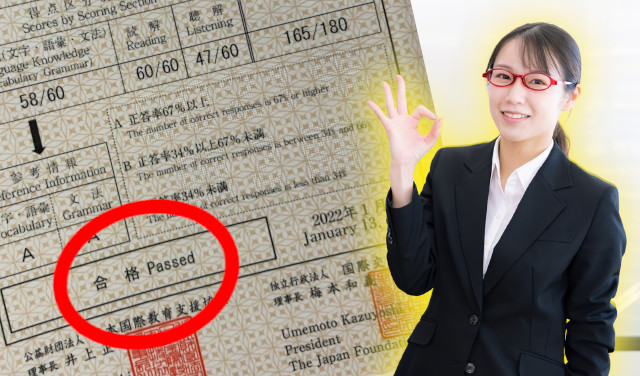 Strategies to take down the N1 final boss.

Way back in 2009 I took my first stab at the highest level Japanese Language Proficiency Test (JLPT), which was Level 1 back then and is now “N1.”

And I failed. I never tried again, until last year. This time around, I was determined to pass.

After six months of studying, a hectic test day, and waiting weeks for the results, this came in the mail. 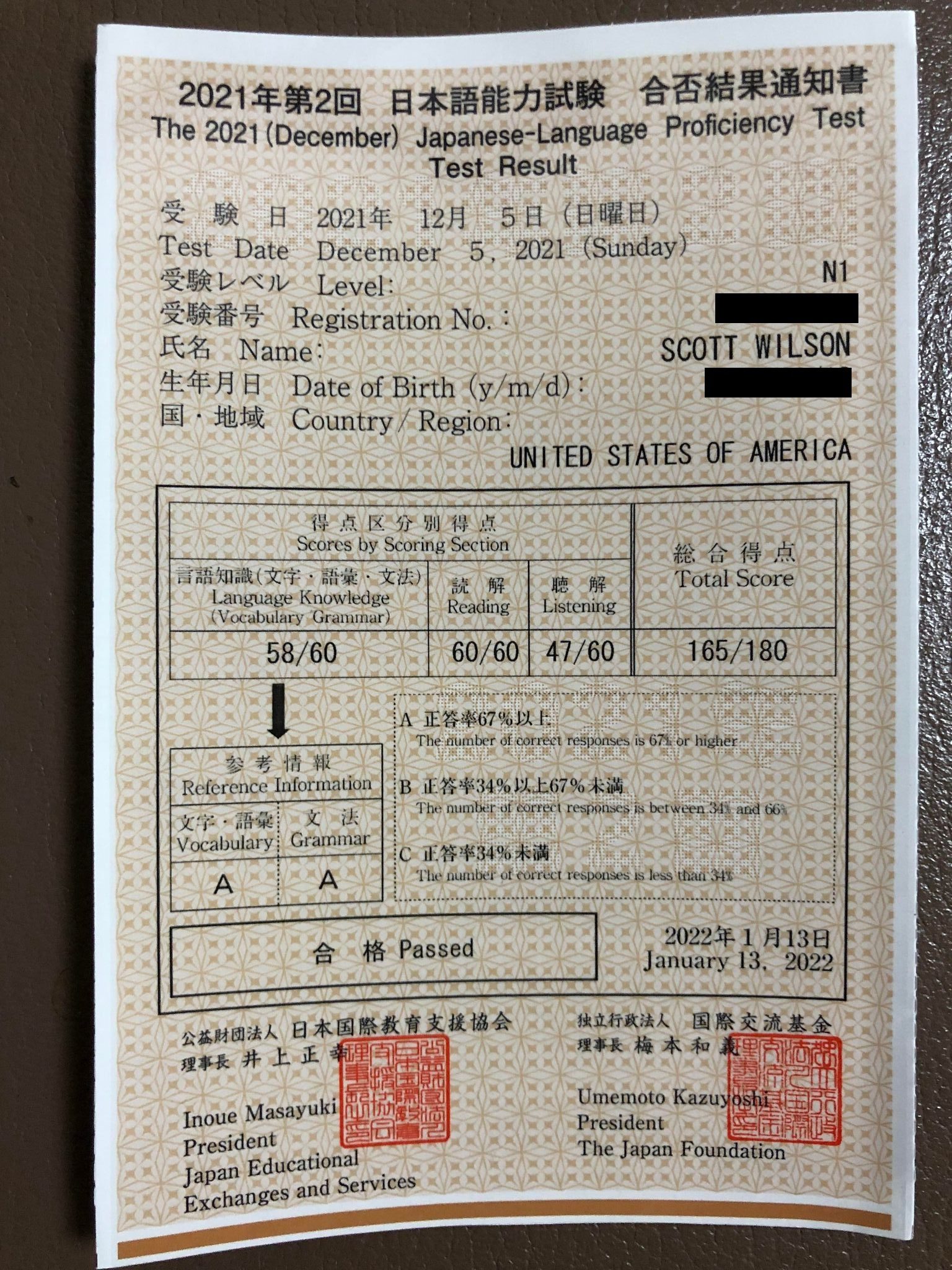 There are a multitude of JLPT strategy guides out there, but I’d like to share my experience in how I prepared for the test, since I feel like I did a few things differently.

I’ll go over each section of the test individually (vocabulary, grammar, reading and listening) and outline what I did to practice. Feel free to try them out for yourself or experiment with other methods. There’s no one correct way to pass the JLPT — finding whatever method works best for you is best!

One note before we start: for those unfamiliar with the JLPT, it has five levels, ranging from N5 (the easiest) to N1 (the hardest). If you’re not sure which level you should take, the official JLPT website has some sample questions to try out.

As a general rule of thumb though, if you don’t regularly interact with native Japanese materials (such as reading articles in Japanese, or watching media in Japanese without subtitles) then I would recommend not going for N1 right away.

So let’s get started! 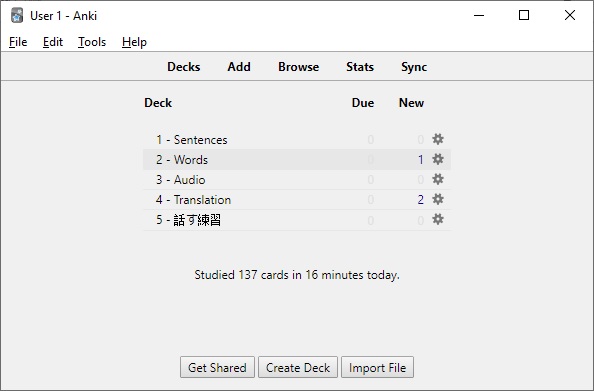 Right off the bat, Anki is the reason I passed the JLPT. It’s a digital flashcard program that automatically spaces out cards for you to do each day so that you get maximum memory strengthening with minimum effort.

Maybe some people can study tons of vocabulary and grammar points and just remember them easily, but for me unless I make flashcards, I forget them after a few days. As long as I just reviewed whatever cards Anki had prepared for me each day, even if it took a while to get through them, everything eventually stuck and I couldn’t forget the info if I tried.

You can download Anki here. And remember, there’s no need to sit down for an hour straight and do all your cards at once if you don’t want to. You can get Anki for your mobile device, or sync your deck to Ankiweb, and spread out your cards throughout the day.

Personally I divided my different types of Anki cards into different decks, as you can see in the screenshot, but feel free to use whatever organization you’d like.

I’ll be referencing how to make Anki cards for each specific section of this article. Of course you can ignore those parts if you’re not interested… but do so at your own risk! 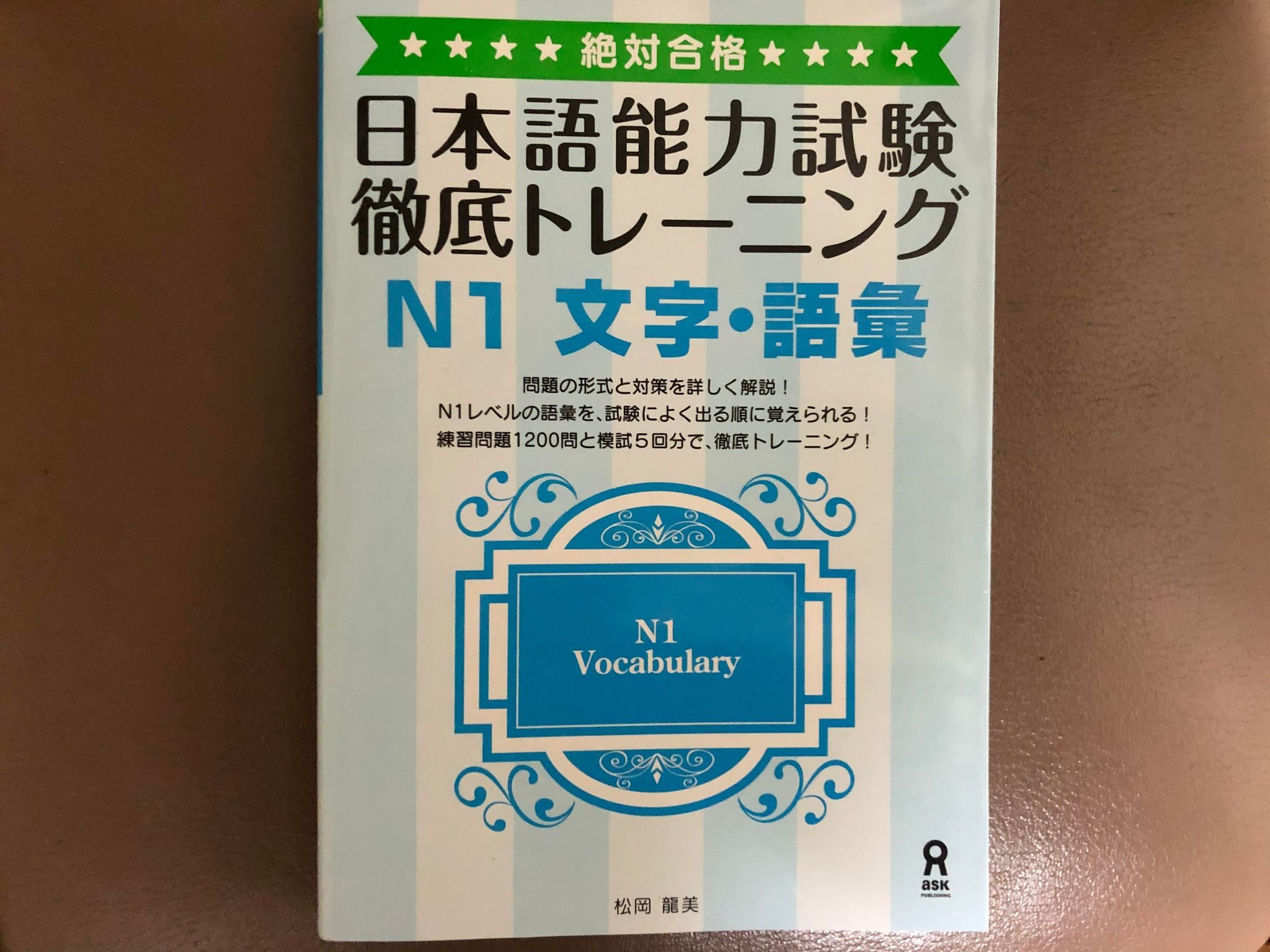 True to its name, it is extremely tettei (“thorough”). It has 92 lessons with dozens of vocabulary and 12 sample questions each, three “mini” tests with 60+ sample questions, and five “full” tests of 25 questions that are the same format as the real N1 test.

Not only that, but all the vocabulary words are divided into one, two, and three star sections. Three-star words have appeared on previous tests (highest priority), two-star words are part of the old JLPT Level 1 vocabulary list (high priority but may not appear on the current N1 test), and one-stars are high-level words that might appear and are generally good to know (medium priority).

For me, I did one lesson or test each day, inputting into Anki every word I didn’t know and every question I got wrong. Some days it was a lot, but the star system helped: I always put in the three and two-star words, but if I was mentally exhausted then I’d skip some of the one-star ones.

I used two ways of putting vocabulary cards into Anki.

▼ For the kanji section, just the kanji on the front and the reading/meaning on the back.

▼ But for other sections, where the words are similar and depend on context, I put the sentence on the front and the correct answer on the back with some wrong answer reminders.

This might seem like a lot, and it is, but the vocabulary section is specifically designed to be tricky.

You might be able to figure out an unfamiliar word like 割り切る in regular context, but when a JLPT question is specifically written to try and trip you up, suddenly it’s going to be very hard to remember the difference between 割り切る and 割り込む and 打ち込む and 打ち切る.

But if you put them into Anki and drill them every day, then you’ll be able to breeze through the vocabulary section no problem! 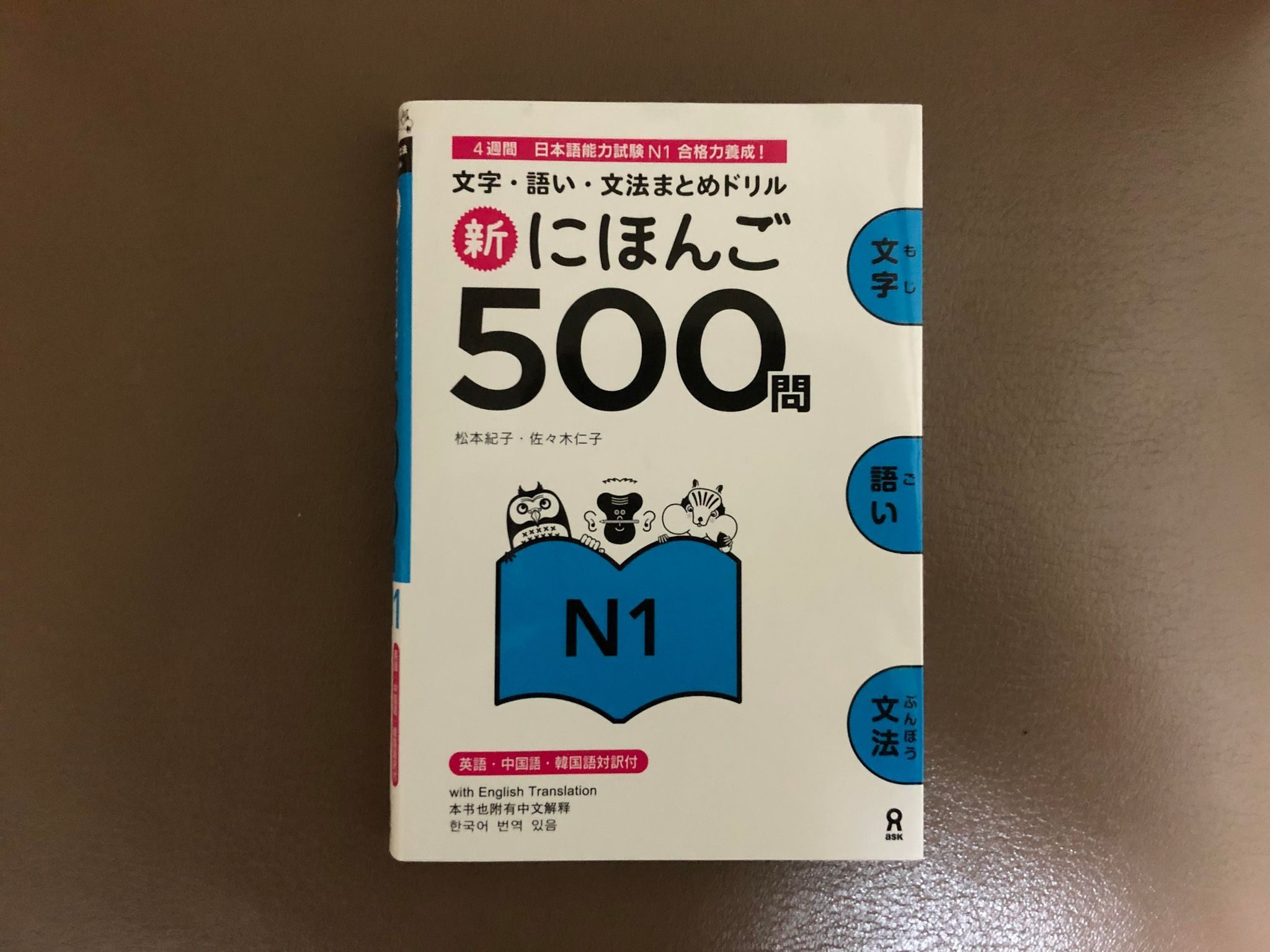 For grammar, I used the quiz book in the picture above: Shin Nihongo 500 Mon N1 (Amazon Japan link).

The book has good explanations for each question though, plus it gives extra example sentences, so lots of fodder to put into Anki for sure.

Instead, what was much more helpful for me was the N1 grammar YouTube series by Deguchi Sensei.

Each video he goes over the grammar point in detail, gives lots of examples of how it’s used, then ends with a sample question. It may seem like he goes into too much detail, but knowing what specific situations you can/can’t use certain grammar points is crucial to doing well on this part of the test.

For example, what verb tenses come before/after using が速いか? And what specific nouns can be used with まみれ versus だらけ?

Best of all, it’s all in Japanese, and there’s tons of Anki-fodder in every video.

▼ A grammar card for からする. I put a reminder of how it’s different from からある on the back, but don’t put too much info or you won’t bother to read it.

I went through two videos per day, putting in at least two sentences per grammar point. When I finished the N1 playlist, I also went through his N2 playlist too, since a lot of those grammar points can come up on N1, especially in the listening section.

For example, do you know the difference between 次第 and 次第に and 次第で and 次第では? That’s N2 level and definitely good to brush up on! 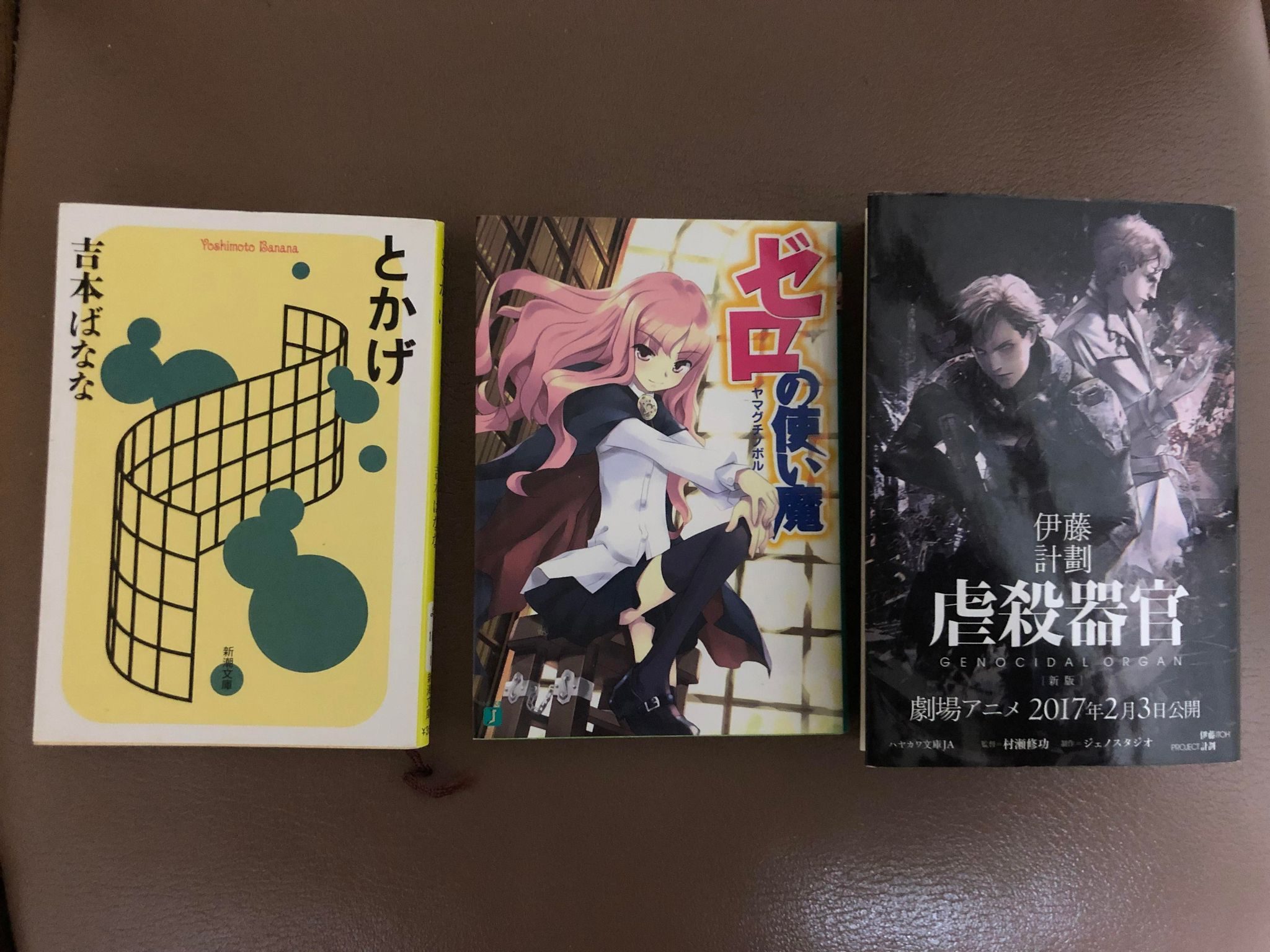 For reading comprehension, I didn’t really use any special tricks: I just read a lot to practice.

I think a lot of Japanese learners often skim over words they don’t know or sentences they don’t understand when reading, but to practice for N1 you have to make sure you understand everything.

To that end, it doesn’t really matter what you read to practice, so long as you’re reading something native, difficult, and making sure you’re understanding it thoroughly. If you’re looking for something that’s a little fun to take the edge off though, I recommend these three books that I personally read:

Again, those are just some that I’ve personally read, feel free to pick up whatever you’d like. The important part is putting sentences you don’t understand into Anki, like this:

▼ A sentence from another novel, Eighty-Six. Referencing the English translation can be a great help if you get really stuck on a sentence. 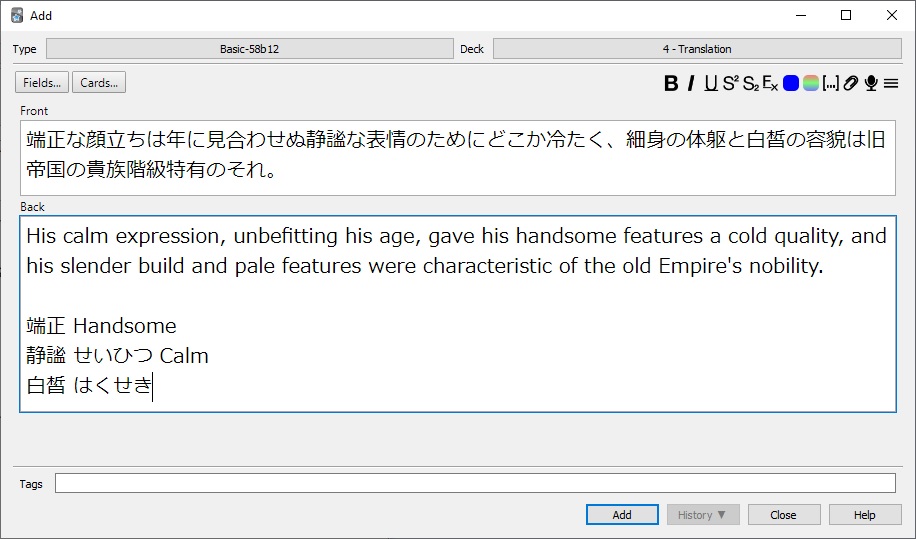 Making an account on a website like HiNative or Tandem is also great to ask native speakers when you don’t understand something. Just be sure to give back to them too.

One last thing to keep in mind: if you’re reading something in Japanese and you’re not enjoying it, try to push a little further ahead. The dry readings on the test are likely not going to be much more interesting, so having some practice overcoming boredom and deducing what’s going on anyway can be very beneficial.

That’s what helped me get a perfect score on this section, since I had so much experience pushing through and forcing myself to understand texts that initially seemed frustratingly cryptic. 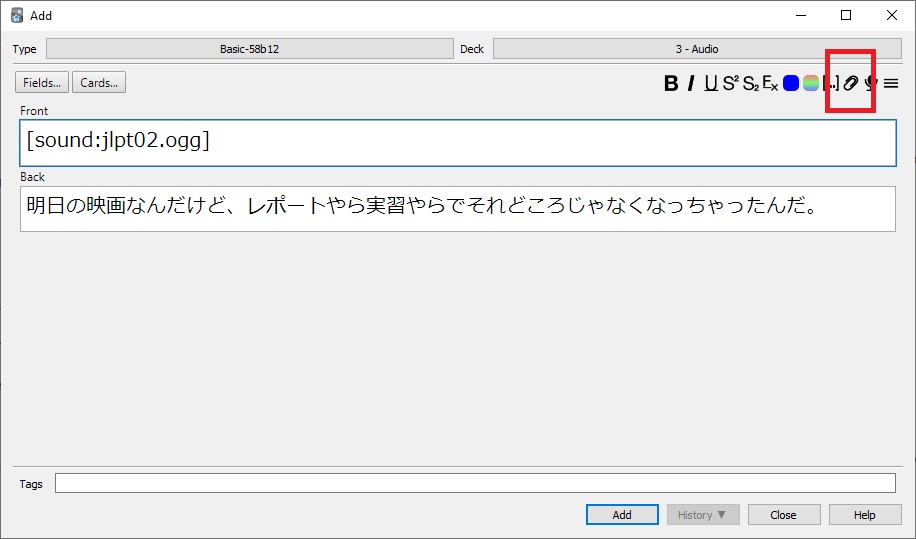 For listening comprehension, you can put audio files into Anki the same as any other card. Like in the screenshot above, just click the paperclip to put any sort of media such as audio, images, or video into Anki.

For my audio cards, I put the audio file on the front, the transcription/hard words on the back, and reviewed them that way. Mainly I focused on putting in audio files from practice JLPT tests, but pretty much any Japanese audio that you want to hear over and over again until you master can work fine.

As for the actual listening comprehension part of the test itself, pretty much anything can come up content-wise, but the test follows the same format every time, so if you do some practice tests you can get a feel for common patterns.

For example, the last two listening questions are almost always long conversations about four different things (like four different types of vacuum cleaners). Then at the end, you have to pick which of the four items the people are interested in.

If you have experience taking the test multiple times, you’ll know to just divide your paper into four squares, label each one with the item they’re talking about, write down every little thing they mention about that item, then simply cross out/circle the item when someone talks about not wanting/wanting it.

Other test takers who didn’t practice as much might not know that, and they’ll be left trying to remember if it was vacuum number two or three that was yellow, since they didn’t think that would be important until the woman said she wants a vacuum that matches her yellow curtains.

▼ Here’s what that last section from a practice test looked like for me. It’s a mishmash of English/Japanese, and I can’t read it now, but it worked great at the time. 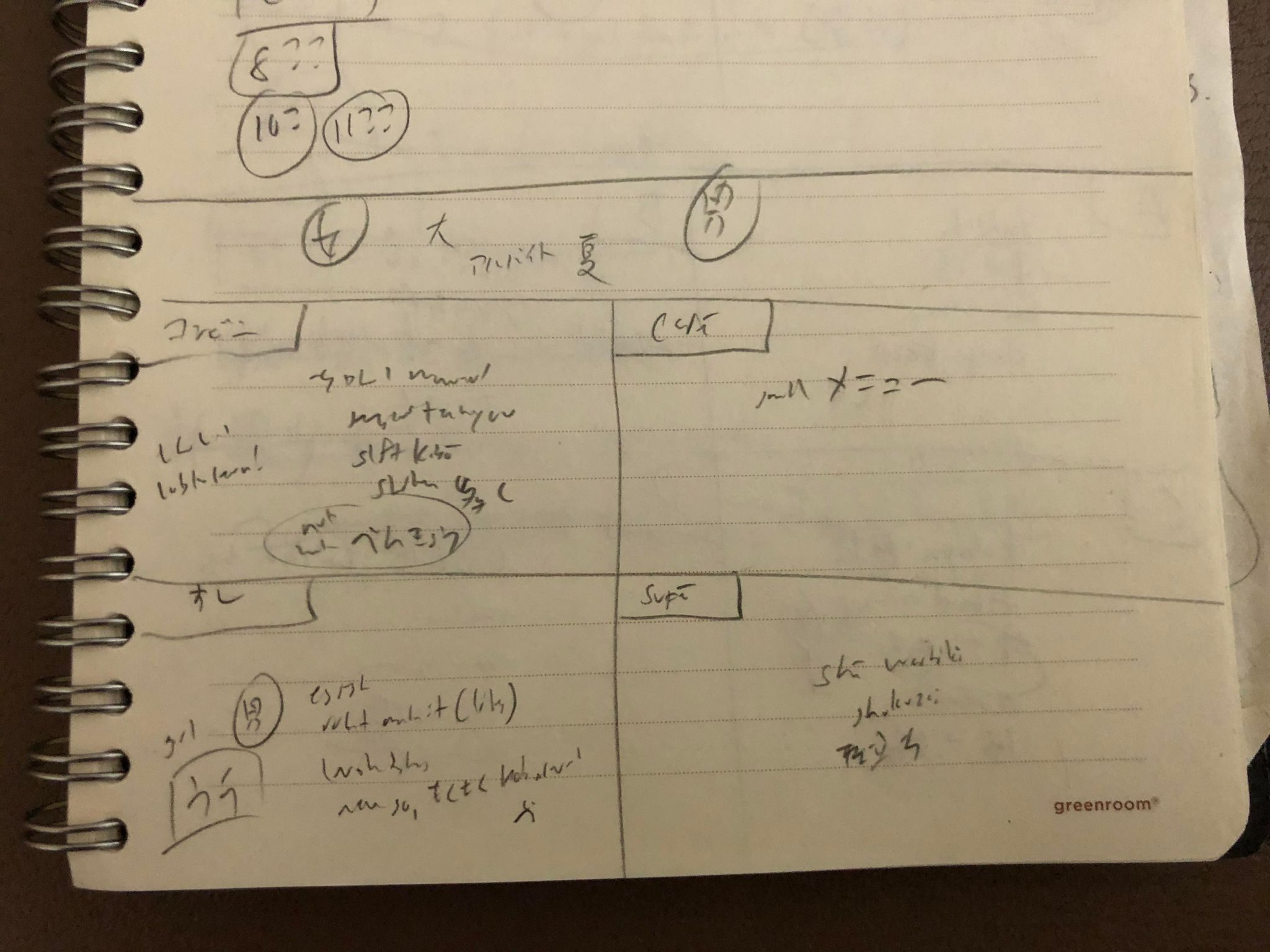 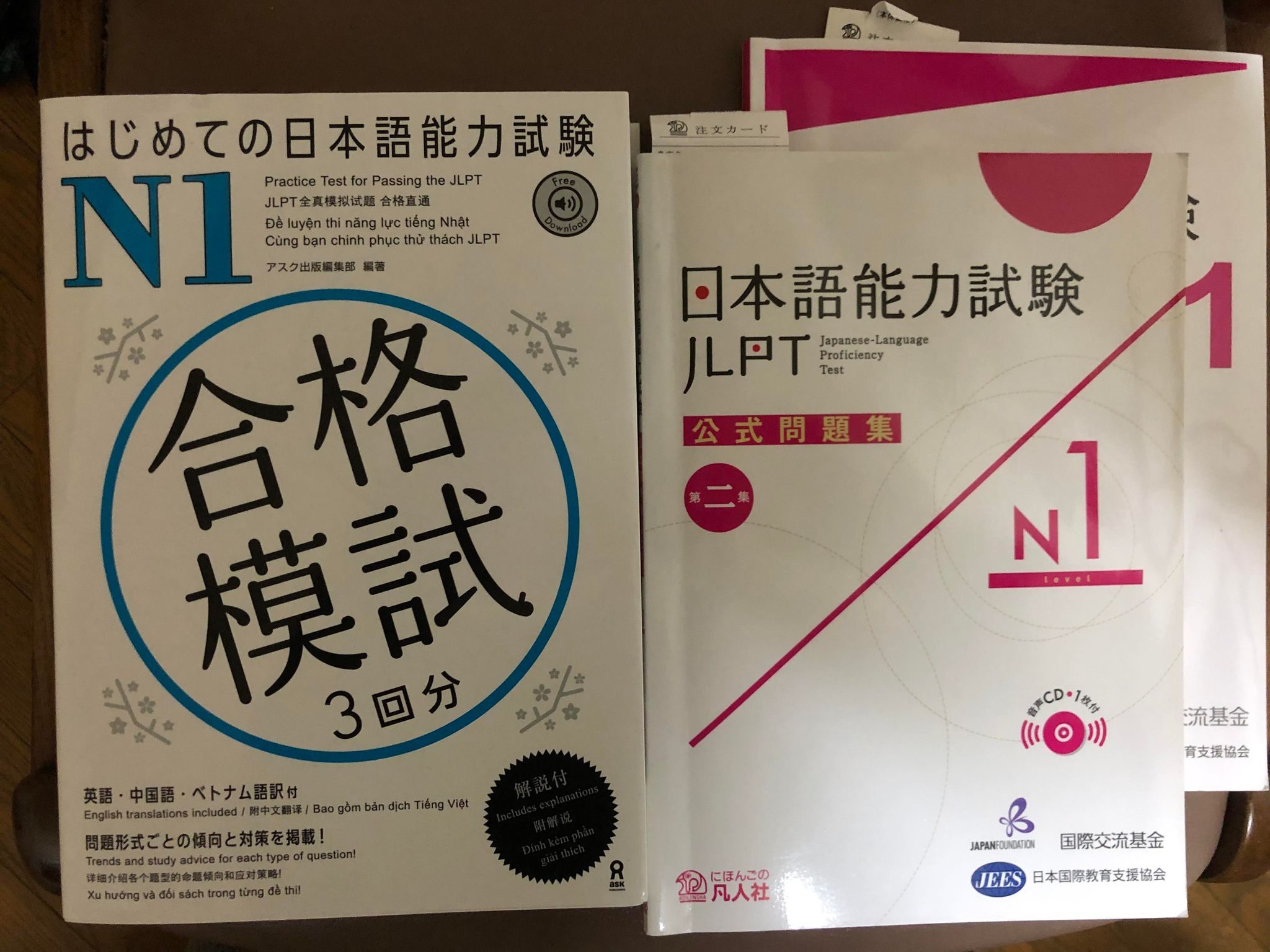 Speaking of practice tests, far and away the most important part of preparing for the JLPT is to take as many practice tests as you possibly can.

Additionally, I also took four one-hour mock JLPT N1 exams put out by Language Plus One, which were excellent. This semester they’re offering an N1 training course that includes three one-hour mock tests, and if you’re interested you can send them a message at the e-mail address there.

The more practice tests you can do, the better. And of course, put every question you get wrong into Anki, and do whatever reviews it tells you to do every day.

▼ My Anki stats. From 30 weeks ago to 10 weeks ago was when I was studying a lot, doing hundreds of cards per day. If I can hit 100 percent days studied, so can you! 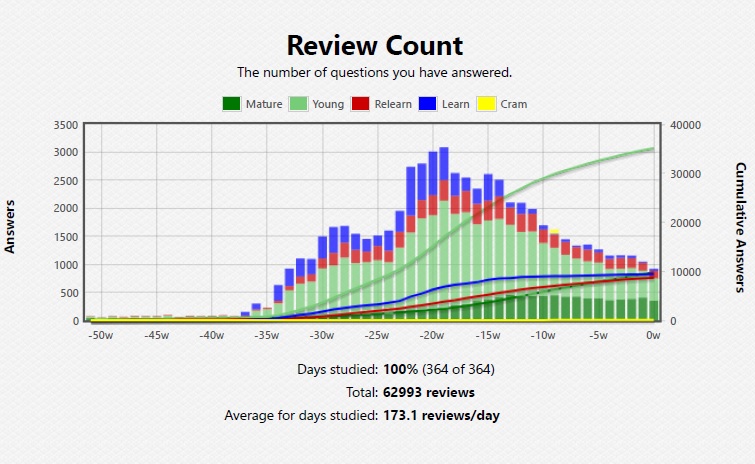 And that’s about it! The JLPT N1 might seem crazy difficult, and in some ways it is, but it’s far from impossible. It’s just a matter of practicing enough, building up your confidence, and getting a good night’s sleep the day before.

Oh, and also, just be sure not to get kicked out on of the classroom on test day because you wore your mask wrong.

Photos: ©SoraNews24
Top image: Pakutaso (Edited by SoraNews24)
● Want to hear about SoraNews24’s latest articles as soon as they’re published? Follow us on Facebook and Twitter!