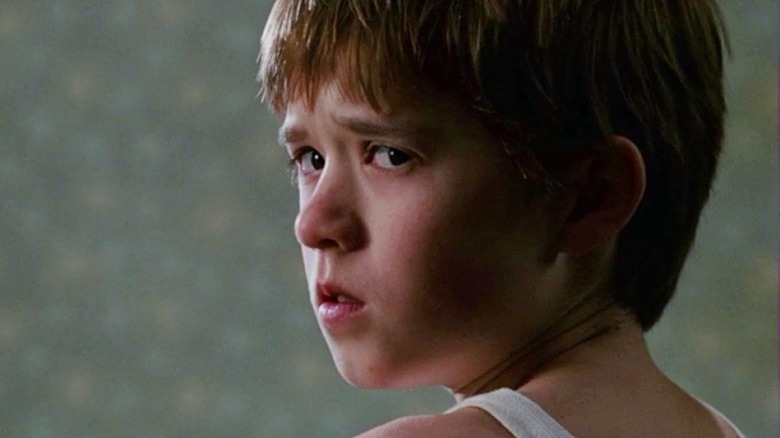 (Welcome to Scariest Scene Ever, a column dedicated to the most pulse-pounding moments in horror with your tour guides, horror experts Matt Donato and Ariel Fisher. In this edition, Ariel remembers very real terror in "The Sixth Sense," and Matt feels like he's seeing dead people for the first time all over again.)

However memeable it's become over the years, "The Sixth Sense" is, in my opinion, M. Night Shyamalan's masterpiece. While rewatching it for this week's column, all I could do was remember what made it so terrifying to me as a child. I was 11 years old when it hit theaters, and my mom and I went to see it. It scared me so much that when we got home, I refused to leave her side.

It was just us in the house. I don't remember where my dad and brother were, but for that evening, at least at that moment, it was just the two of us. I was like her shadow hanging onto her waist and walking around with her while she turned on the lights throughout the house. She lost her patience with me, and I can't say I blame her. She didn't yell at me, but she did that thing that parents do when they're annoyed and let that responsible parent facade slip for just a second. That second was enough to make me cry in terror because she reminded me of the scene that scared me the most in the entire film — when the ghost in the kitchen yells at Cole (Haley Joel Osment).

I viscerally remember that scene and how it made me feel, but it wasn't until now that I could identify why it scared me so much. We see that scene through Cole's eyes. It's shot from his vantage point: small and afraid and yelled at without understanding what he's done wrong or how he can make it better, or just make it stop. The entirety of "The Sixth Sense" is written and shot in such a way that validates children's fear rather than making it a mockable moment. 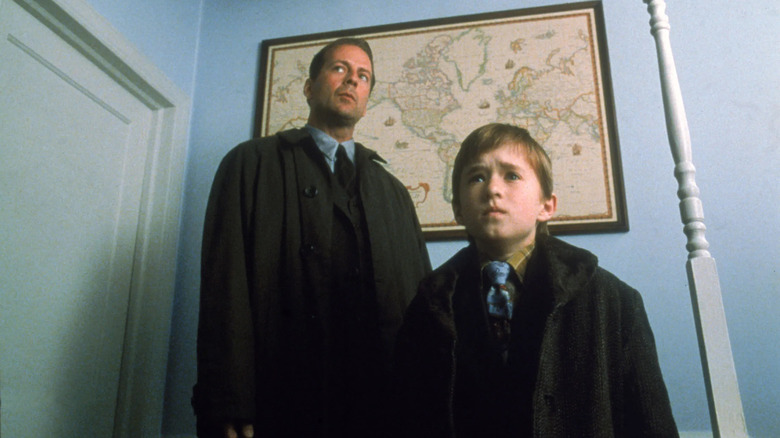 A year after a devastating attack in his home, child psychologist Malcolm Crowe (Bruce Willis) starts treating a young boy named Cole Sear (Osment). He bears a striking similarity to one of Malcolm's former patients, Vincent Gray (an unrecognizable and outstanding Donnie Wahlberg) — the man who broke into Malcolm's home and attacked him a year prior before killing himself. Malcolm is deeply compelled to try and help Cole where he failed with Vincent as a child. But first, he needs to find out Cole's secret...

The Story So Far 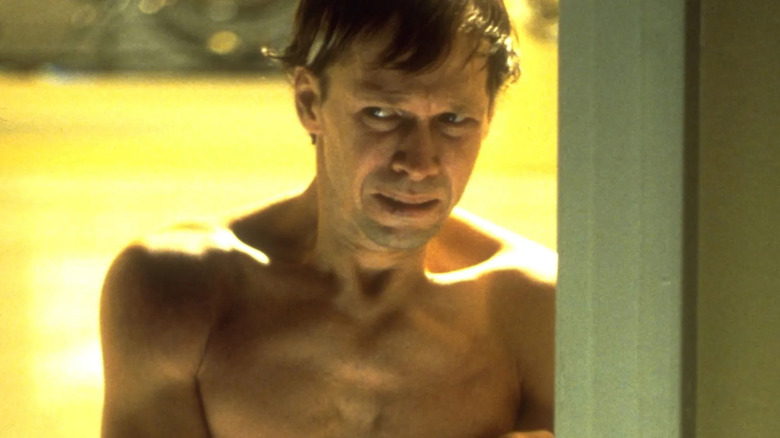 Listen, it's been 23 years since "The Sixth Sense" was released, so a spoiler warning for quite possibly one of the most spoiled movies in history (shy of "Soylent Green" and "The Empire Strikes Back") feels vaguely redundant. But here you go anyways. Consider this your spoiler warning.

Shyamalan starts his film off by killing his protagonist. Well, one of them. Vincent broke into Malcolm's house on a celebratory night after receiving special honor from the city of Philadelphia. He and his wife, Anna (Olivia Williams), were enjoying their evening when they meandered upstairs -- only for Donnie Wahlberg to steal the entire film with his truly underappreciated performance. Or maybe it just seems underappreciated because I was a child when it came out. I suppose that's possible.

Vincent shoots Malcolm, furious for being failed as one of his former patients. Malcolm never believed him. He was convinced Vincent was lashing out because of his parents' divorce, but something far worse was happening to the poor little boy.

Now, a year after the attack, Malcolm is trying to help Cole, a little boy with a similar streak of white in his otherwise ginger hair who seems to possess the same morbid maturity and personal demons as Vincent did all those years ago. Cole lives with his mother, Lynn (Toni Collette in an outstanding breakout performance), a divorcée working two jobs just to try and make ends meet. But she's struggling.

Cole is having issues at school. He's supposedly misbehaving in class, being disruptive, drawing pretty horrific things, and speaking out of turn. His behavior is starting to disturb some of the teachers and makes him the target of vicious bullying from his classmates.

One day, Cole gets the dreaded pity invite to the birthday party of one of his classmates. The boy and his friend — the insufferable Tommy Tammisimo (Trevor Morgan) — decide to play a cruel prank on Cole by locking him in a closet door at the top of the stairs. Something was in there with him, and it was hurting him. After finally getting out and being taken to the hospital — thankfully, Lynn was there to chaperone the party — Cole is ready to share his secret with Malcolm: he sees dead people.

After coming home and being tucked into bed ever so lovingly by Lynn, Cole is finally able to sleep. Until, of course, nature calls. He does that typical kid thing at the threshold of his bedroom where you stare into the darkness of the hallway and assess how quickly you can shuffle to the toilet without wetting yourself or getting caught by whatever's lurking out of sight. He makes it to the lit bathroom safely, does a little wiggle, and starts to pee.

We cut to the thermostat, and the room temperature starts to plummet.

The camera cuts back to Cole as he finishes up. It's quiet as a figure suddenly passes the doorway. Cole stops moving and slowly turns his head to look at the hallway, his breath suddenly a visible mist hanging in the air.

As calmly as he can manage, he follows the figure into the kitchen. He thinks — or rather, he clearly hopes — it's just Lynn grabbing a midnight snack. All he hears as he nears the doorway is cupboards opening and closing, drawers sliding open as if someone's searching for something.

He peers into the kitchen, seeing a woman with her back turned to him who very well could be his mother. Same color hair, similar build.

"No," the woman says as she turns around, "dinner is not ready!"

It's not Lynn. She has bruises on her face like she's recently been beaten. She's angry, and she's yelling at Cole but as if she's speaking to someone else. "What are you gonna do?!" she bellows.

The cut is to a wide shot of the kitchen, the woman standing in the far right corner of the room facing the general direction of the camera. We're positioned where Cole's point of view must be — low to the ground, standing in the doorway, able to see the entirety of the scene in front of him. Cupboard doors left ajar, drawers hanging open.

With what sounds like a scream and a sob the woman shouts "You can't hurt me anymore!" as the camera quickly cuts to a closeup of her slashed wrists. "Lenny! You're a terrible husband, Lenny!" she shouts as Cole runs away, terrified, to hide in his makeshift tent. His safe place.

The last glimpse he has before he shuts the cloth door is of her barrelling down the hallway, sobbing and screaming. She's exuding more anger and bigger emotions than a child his age should have to be responsible for. He turns on the flashlight and sobs silently, desperate to make the fear stop. To bring himself back to some semblance of safety. 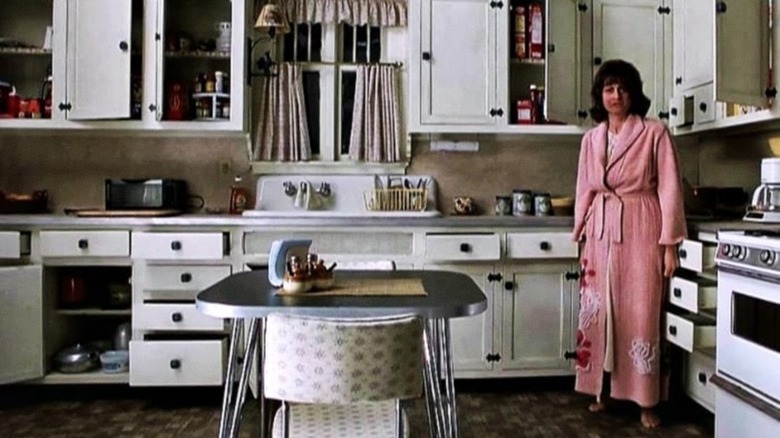 You'll never catch me peeing with the door open for this very reason. Not to say "The Sixth Sense" instilled the horror within me — I'd long been scampering through dark hallways and slamming the door behind myself like the bathroom was a safe zone in "Left 4 Dead." The shiver that shoots up my spine when the ghost passes Cole while he's in a steady stream is real. That's just the introduction to the scare, too. It gets worse, but I highlight this seemingly innocuous setup because it's endangering Cole in a moment of vulnerability. Shyamalan understands that scares are just as dependent on surroundings as visual jolts.

Even worse, Cole cannot reason with this ghost. As the abused housewife screams at Cole, showing her slashed wrists, there's nothing the cowering child can accomplish. This ghost has a vengeful agenda and spews fury that Cole cannot meet with reason. Her demise points towards domestic abuse, extrapolating the sorrow and tragedy being thrust into Cole's face. Shyamalan hits you with a figure passing in front of the camera, then slugs you with devastating background information that gnaws away at your core. It's a layered scare that uses physical and psychological executions because Shyamalan understands horror beyond visual jolts.

What am I getting at? It should be clear after selecting "The Visit" last week. M. Night Shyamalan might take narrative swings that span stratospheric heights and sunken ship lows, but his comprehension of pure horror is often exquisite. Some might argue there's a scarier scene in "The Sixth Sense" (which was already covered in this column), and that's fine because Shyamalan gets it right multiple times. Internet trolls might diminish the filmmaker's accomplishments by joking about his obsession with "twists," but that's malarkey. Shyamalan knows how to construct a damn fine scare through the good and the bad.

Read this next: How These Child Stars Feel About The Horror Movies That Put Them On The Map

The post One Of The Scariest Scenes In The Sixth Sense Validates Kids' Fears appeared first on /Film.