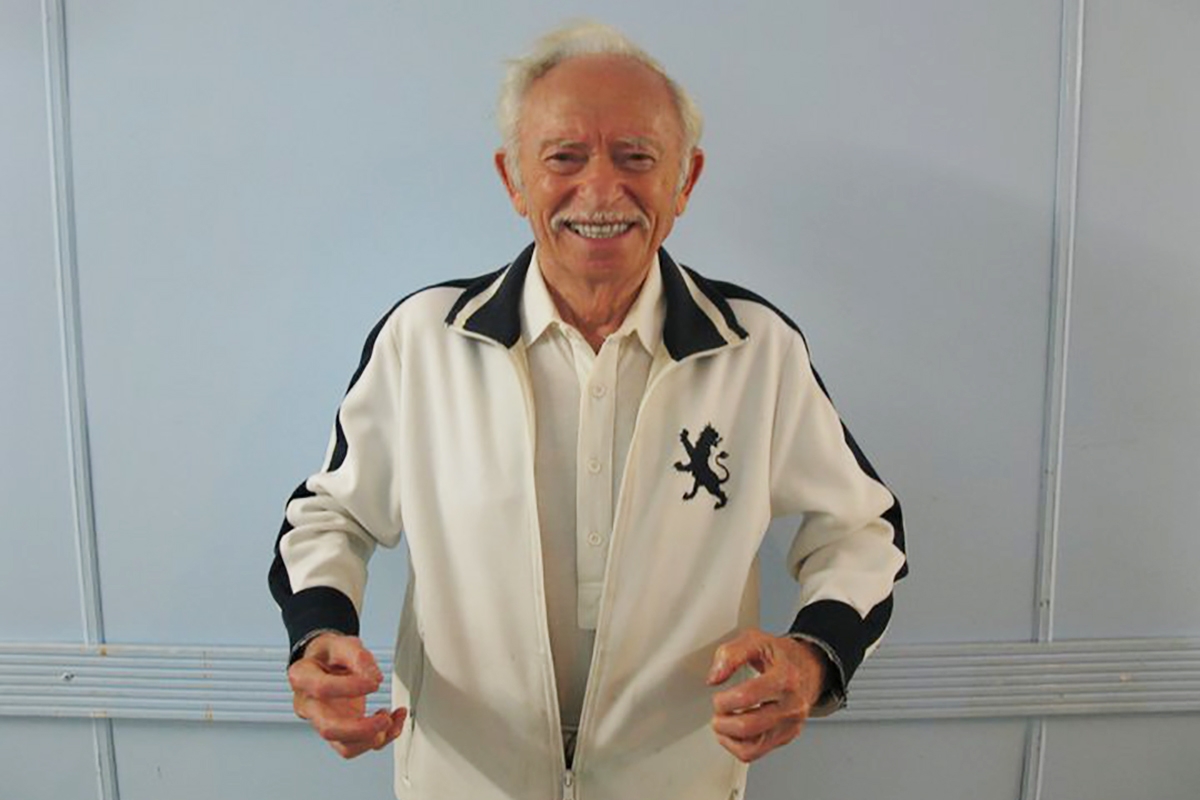 As I commemorated the second anniversary of my Poppy’s passing in April, and with the coronavirus and its emerging variants still ravaging a planet, I keep thinking about how prescient my dad, Jacob Breitstein, was about the spread of disease — and, even more so, about ways to prevent disease.

Poppy was so passionate about the pursuit of health that on his gravestone the phrase “Founder of MIRF” is inscribed. Allow me to explain: My dad, who passed away at age 97 (or 96, it was never quite clear) had, over the course of his lifetime, developed a trove of “health secrets” which he dubbed “MIRF” — as in, “Multiple Infestations Removed Forever.”

His biggest idea was, essentially, that “increased blood speed eliminates microscopic beginnings of fat, cancer cells, weak and harmful germs” — and the way to keep one’s blood circulating was to do a series of simple stretching and squeezing exercises. The “stillness” of a person’s blood, he was convinced, was what made people vulnerable to everything from colds to cancer. With his grandkids’ help, he even self-published a thin book of his ideas, called “MIRF: Empowering the Brain: Sensational Breakthrough.”

But on what authority? My dad never finished high school. He is not a doctor or an expert in medicine. But he did survive numerous Nazi labor camps, Auschwitz-Birkenau and the notorious death march. It might not be a complete stretch to think that maybe he had some insight into how to survive… well, anything.

He expressed regret once that he only wished he had discovered MIRF when he was a teenager at Auschwitz, or even as an adolescent before the Nazis invaded Poland, where he was born and raised. He said that the Nazis might have appreciated his cures and maybe would have stopped persecuting Jews (and everyone else) if they just felt better.

Poppy said MIRF could cure evil, and that MIRF would “definitely” have helped his fellow prisoners, who were suffering beyond all comprehension. Because, of course, according to him, MIRF cured anything. (Personally, I remain skeptical. Then again, if there are better theories for cures for what ails Nazis, I don’t have any. Do you?)

My dad would tell everyone he knew, along with people he just met, his MIRF “secrets.” Usually, they’d be his captive audience, though sometimes I witnessed a sense of discomfort that told me they might just like to move on with their day, but didn’t quite know how to get out from under the circumference of this trim, 5’1” man on MIRF-inspired fire. Oh well!

Over the years, he would add new MIRF exercises to his repertoire. One was called the “Stomach Bump” — he suggested friends and family bump stomachs with one another to gently aid with digestion. He would offer to bump stomachs with strangers, and I’d watch — sometimes cringing, sometimes aghast — as they obliged… maybe because he was uncanny about finding the prettiest women, young and old alike, to do the stomach bump with.

His preaching happened anywhere — on the street, at community centers, senior dances (where nimbly he’d take to the floor with multiple partners to demonstrate the power of MIRF) or at galas or arts events he attended with me. When my mom died of pancreatic cancer 15 years ago at age 69, my dad, 13 years her senior, insisted it was due to her MIRFING non-compliance.

Though my mom begged him to “leave everyone alone with your mishegas,” we all knew he preached MIRF out of love. It was the promise of good health and longevity for everyone that interested him — and he was convinced that any sane person ought to agree, including my poor mother.

The desire to impart his health secrets consumed him. By contrast, though he did bear testimony in the Shoah Project, my dad had little to no interest in or dredging up memories of the dark days of the Holocaust, in which he lost two brothers, two sisters and his mother, my grandmother, after whom I am named. Only he and my grandfather survived, and they witnessed countless horrors and had to rebuild broken lives. But with MIRF, I think he was trying to invent a new and better way to live; the elixir for preventing problems and the path to enjoying a rollicking, disease-free old age.

Over time, Poppy’s preaching about MIRF gained him a small but loyal following in Forest Hills, Queens, where dozens of neighbors, and especially his fellow chess players, regularly met at a small, local park. They giddily greeted each other with fists clenched — this simple squeeze, according to my dad, speeds up the blood, pushes out harmful bugs and prevents new ones from taking hold.

On his winter escapes to Florida, he managed to convince many hotel and senior-residence managers to allow him to present a lecture about MIRF  — and to lay out his books for sale, too. He succeeded in selling a few each time, which made him especially happy. Over time, he grew sophisticated about preaching his MIRFing gospel; one young disciple created and equipped him with a slide show he could take anywhere. For each new convert, I wondered: Did they really believe in MIRF? Or were they just trying to humor my dad? Or, the question that trumped all others: Could MIRF possibly, actually work?!

Logic, of course, tells us it doesn’t. But given the remarkable energy my dad enjoyed for most of his life — he eschewed the elevator in order to sprint up and down nine flights of stairs to his apartment, up until he was 90 — the question loomed. Especially as he gained attention.

About a decade or so ago, a neighbor in his building, a reporter for a local weekly, wrote a story about my dad: his story of survival, his stair climbing and, of course, his MIRFing. When he showed me the story in the paper, I admit that I nearly fell off my chair — a just comeuppance for his naysayer daughter. If you could bottle the glee he felt, you could prevent a genocide! I was genuinely happy for him. The attention empowered him, and he dialed his MIRF teachings up a notch.

These days, my dad’s self-published book is out of print. But I can’t rule out another go around with a publisher, perhaps someday spliced together with the story of his persecution and survival. Maybe it’s related… the idea that one evil people can snuff out an innocent people, but that lo and behold, one of their victims later turned their treachery on its head by devising “the secrets for longevity.”

If my father was still here today, I’m certain he would add Covid to the list of ills MIRFing could help alleviate. A survivor above all else, I’m also certain he would have been first in line for the vaccine. But, as he was wont to do, he’d also come up with a brand-new MIRF strategy for this virus. He was always fine tuning his exercises, and now —  for free! —  to honor my dad’s memory, I’d like to reveal that the Stomach Bump was not his premiere MIRF exercise.

That distinction belonged to “the MIRF Greeting,” something he promoted in lieu of the handshake or hug. I can’t think of a better time or reason to introduce it to the world. Here’s how he instructs doing it in his book: “Squeeze your hands by your side using the power of your internal and external organs. Power exhale (a belch is OK) for five seconds. Stay calm for ten seconds. Let the blood circulate forcefully through your body.”

My father wanted this to become a universal greeting around the world in order to prevent illness and disease from spreading. When he learned that I was traveling with Hillary Clinton in 2012 to Africa (as a member of her press corps), he begged me to share his MIRF secrets with her. I did not. I was too embarrassed, and she was a wee bit busy. But, looking back, maybe I should have.

The post My Holocaust Survivor Dad Had This Quirky Secret to Longevity appeared first on Kveller.