In a lesser-known part of his March on Washington speech, Martin Luther King Jr. proclaimed, “We can never be satisfied as long as the Negro is the victim of the unspeakable horrors of police brutality.”

Many people, upon hearing this, might assume that King was simply referring to the violence wreaked by the police department in Birmingham, Alabama, and its commissioner, Bull Connor, during the Southern Christian Leadership Conference’s desegregation campaign that spring. But King understood that police brutality—like segregation—wasn’t just a southern problem.

Earlier that year, shortly after getting out of jail in Birmingham, King traveled to Los Angeles and delivered a speech to 35,000 people at Wrigley Field. The city was in the midst of a growing effort, led by groups including the NAACP and the Nation of Islam, challenging the pattern of police brutality in the city and calling for Police Chief William Parker’s resignation. L.A.’s civil-rights leaders drew parallels between Birmingham and L.A.—particularly regarding police brutality. So did King. He thanked Angelenos for their support of the Birmingham campaign but made clear that what was even more important was challenging L.A.’s system of racial injustice. “You asked me what Los Angeles can do to help us in Birmingham,” King told the audience. “The most important thing that you can do is to set Los Angeles free because you have segregation and discrimination here, and police brutality.”

In recent years, scholars have broadened the public’s understanding of King’s political concerns to go beyond segregation to include poverty, labor, global human rights, and war. But even in this more expansive context, his attention to police brutality and the structural discrimination of the North has largely been missed. (King and most Black activists of the period used the terms North and northern to encompass all regions of the U.S. outside the South—in part to highlight the shared investment white city leaders and residents from the Northeast to the Midwest to the West all had in not being the South. I follow their terminology throughout this piece and in my academic work.) At the same time, commentators across the political spectrum have tended to pit King against contemporary youth movements such as Black Lives Matter, framing King as a kind of respectability-politics-upholding southern minister who kept a distance from northern Black communities.

But from the beginnings of the Southern Christian Leadership Conference (SCLC) in 1957, King was clear that segregation and injustice were national, not regional, problems, and he relentlessly highlighted the “need for a liberalism in the North that is truly liberal, that believes in integration in [the northerner’s] own community as well as in the deep South.” King had observed pride among many northern white liberals for supporting the southern movement, only to see their sharp refusal to confront segregation and police brutality at home and their dismissal and demonization of local activists who did. Framing northern racism as structural and institutional, not simply a matter of individual racist cops or private discrimination, King called out the pattern of police brutality and segregation in northern cities before the uprisings of the 1960s as well as after—and he was roundly criticized for it by political leaders and citizens, as were other activists of the time. He described “the total pattern of economic exploitation under which Negroes suffer” in northern cities as a “system of internal colonialism” where police and the courts acted as “enforcers.”

King had been calling attention to the issue of police brutality for years. In the September 1958 issue of Fellowship, King published an article titled “My Pilgrimage to Nonviolence,” where he wrote, “I had seen police brutality with my own eyes, and watched Negroes receive the most tragic injustice in the courts.” King himself had been at the mercy of police many times, and knew well the vulnerability and dangerous power dynamics a person under arrest can experience. In his 1964 book, Why We Can’t Wait, King characterized police injustice as a nationwide problem: “Armies of officials are clothed in uniform, invested with authority, armed with the instruments of violence and death and conditioned to believe that they can intimidate, maim or kill Negroes with the same recklessness that once motivated the slaveowner.”

Throughout the 1960s, King supported disruptive direct-action movements including school boycotts, rent strikes, and street protests that challenged school and housing segregation, job discrimination, and police brutality in the North as well as in the South. “It is purposeless to tell Negroes they should not be enraged when they should be,” King observed. In 1964, he refused calls from Black and white moderates to condemn the Brooklyn Congress of Racial Equality’s plan to highlight the structural discrimination rife within the city by stalling cars on the highway leading to the 1964 World’s Fair in Flushing Meadows: “We do not need allies who are more devoted to order than to justice ... If our direct action programs alienate so-called friends … they never were really our friends.”

In July 1964, the police killing of a 15-year-old Black student, James Powell, sparked a six-day uprising in Harlem. New York City’s mayor, Robert Wagner, invited King to come to town, hoping he would ease tensions between residents and city leaders. But King didn’t play by the mayor’s script. He first went to Harlem to meet with local leaders who’d been decrying issues of police brutality, housing, and school segregation in the city for years, and then had four unsuccessful meetings over three days with Wagner. King made clear that “profound and basic changes” related to jobs, housing, schools, and police would be essential to avoid further uprisings. He criticized the police commissioner, Michael Murphy, for having “little understanding of the urgency of the situation” and for being “unresponsive to either the demands or the aspirations” of Black people, and called for the suspension of the officer who’d shot Powell. King was nearly run out of town by Wagner and Murphy when he dared to suggest that the police needed oversight and the city would benefit from a civilian board dedicated to that task.

Then, two weeks later, after Black people rose up in Rochester following another incident of police abuse, King spoke out about the conditions that had produced these two uprisings. Criticizing the nation’s “shallow rhetoric condemning lawlessness,” he called for “an honest soul-searching analysis and evaluation of the environmental causes which have spawned the riots.” Over and over, King echoed local activists in calling on public officials to tackle housing and school segregation, job discrimination, and police brutality—the tinder that led to these uprisings.

The following year, on August 11, 1965, police in South L.A. pulled over Marquette Frye, a 21-year-old Black man, for drunk driving. The arrest became violent—and Watts erupted in six days of rebellion. By the end, 34 people were dead and more than 1,000 were injured. White Americans were shocked at Black anger, but King and many L.A. activists argued that this was a willful surprise. Black Angelenos had been highlighting the patterns of police brutality, housing and school segregation, and job exclusion in the city for years, and, as King saw it, political leaders kept brushing them off. He decried the violence, and laid its cause at the government’s feet, noting the lack of racial progress in cities like L.A. He wrote that “at a time when the Negro’s aspirations were at a peak, his actual conditions of employment, education, and housing were worsening.”

[Ibram X. Kendi: Compliance will not save me ]

As the uprising subsided, he traveled to L.A. to assess the situation. In a contentious three-hour session with the mayor and the police chief, King highlighted the need for oversight of the police and called for a civilian complaint-review board, as he had in New York a year earlier. And like in New York, the suggestion was angrily shot down by the police chief, William Parker. King also reiterated Black Angelenos’ long-standing demands for Parker’s resignation. Mayor Sam Yorty complained of “unfounded charges of police brutality” and accused King of advocating Black “lawlessness.” He said (white) Los Angeles would not stand for Parker’s resignation.

Growing angry, King criticized the mayor for being “insensitive to social revolution” and made clear that overlooking police abuses or scapegoating an isolated “criminal element” was a dangerous fantasy. Parker and Yorty refused to let King meet with jailed rioters, and Yorty later told reporters that King’s visit was “a great disservice to the people of Los Angeles and to the nation” and said that King “shouldn’t have come here.” King received many letters from white people angry at him about the rebellion and telling him he was playing into “Communists’ tactics in crying ‘Police Brutalities.’”

Three months later, King addressed white shock over the Watts uprising in an article in the Saturday Review, zeroing in on the acceptance of police brutality in the North: “As the nation, Negro and white, trembled with outrage at police brutality in the South, police misconduct in the North was rationalized, tolerated, and usually denied.” King was clear that this pattern of police brutality had been evident long before the uprising—and the movements that had grown out of it—but public attention, in particular the media’s attention, focused on the South. Black northerners, in contrast with Black southerners, were blamed for their unruly behaviors, which then necessitated strong-arm policing while patterns of police brutality were repeatedly denied or swept under the rug. Indeed, a year and a half earlier, in The Nation, King had described “the most tragic and widespread violations” of police brutality: “For many white Americans in the North there is little comprehension of the grossness of police behavior and its wide practice.”

In contextualizing the uprisings of the mid-1960s, King was clear: “The policymakers of the white society have caused the darkness.” King reframed the issue of criminality, moving the focus from Black behavior to white illegality and state action, which had produced northern “ghettos”: “When we ask Negroes to abide by the law, let us also demand that the white man abide by law in the ghettos. Day-in and day-out … he flagrantly violates building codes and regulations; his police make a mockery of law; and he violates laws on equal employment and education and the provisions for civic services.” His police. King made clear that the police were not there to protect or serve Black residents but functioned as a mechanism of control and inequality.

[Read: King’s message of nonviolence has been distorted]

Looking at this aspect of King’s politics provides an urgent antidote to the ways he has been positioned against contemporary movements such as Black Lives Matter. “Be more like Dr. King,” commentators including former Governor Mike Huckabee and the Reverend Barbara Reynolds have instructed young activists. “Dr. King would never take a freeway,” then–Atlanta Mayor Kasim Reed scolded Atlanta demonstrators during nationwide Black Lives Matter protests in 2016. To see King’s attention to police brutality and belief in the utility of disruptive protest is to refuse to accept this false distinction.

Maybe the reason this side of King remains unfamiliar is that it forces us to reckon with a King speaking directly to our time on the structures of American racism. We prefer the story of buses and lunch counters because they place the civil-rights leader—and the inequity he was addressing—safely in the past, rather than reckoning with the ways King called out the repeated attempts to “rationalize, tolerate and deny” police abuse and the systems of injustice at play in American cities. Imagine where we would be today if King’s attention to police brutality, ghettoization, and northern segregation 60 years ago had been taken seriously and addressed. 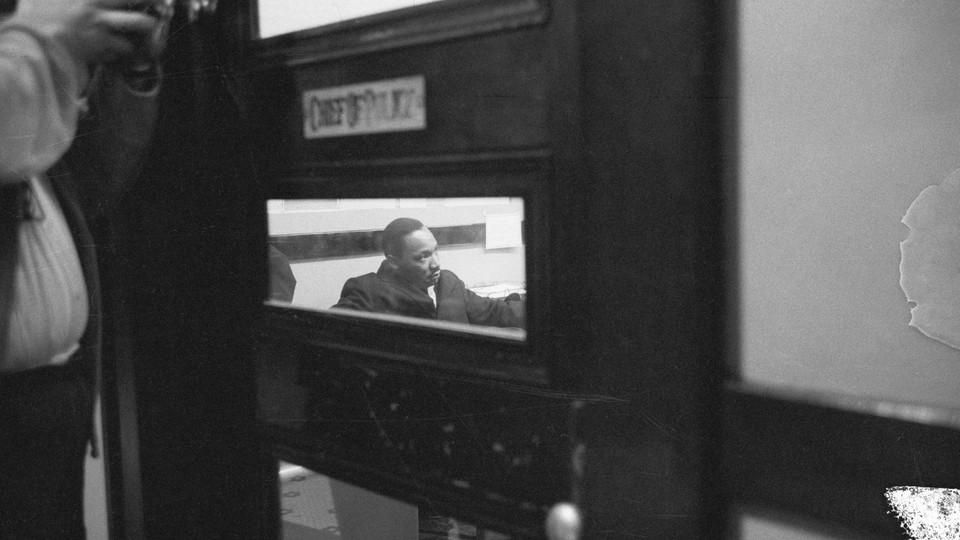