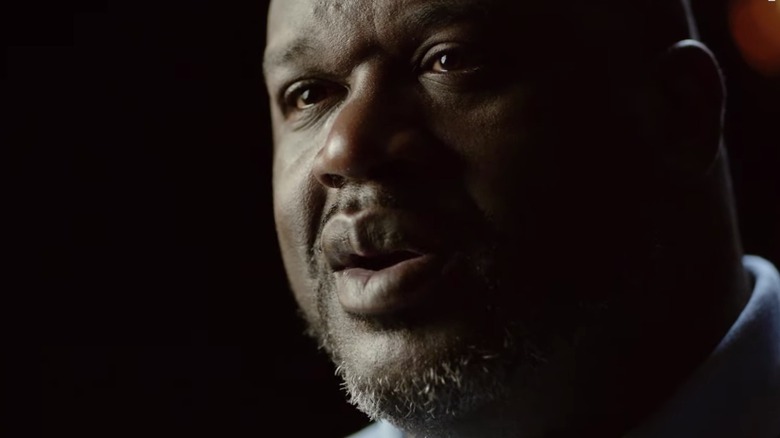 For every action, there is an equal and opposite reaction. And, like clockwork, for every prestige biography miniseries, there is a docuseries from another network waiting in the wings to tell its version of the story. This time, it's "Legacy: The True Story of the LA Lakers." Hulu's upcoming ten episode documentary series arrives on the heels of "Winning Time: The Rise of the Lakers Dynasty," a much-discussed HBO dramatization that finished its first season in May.

Like the fictionalized project, the upcoming docuseries chronicles the rise of the legendary NBA team, but the docuseries looks like it boasts impressive levels of access to major players over the years. From Shaquille O'Neal and LeBron James to Magic Johnson and Kareem Abdul-Jabbar, the project's just-released trailer features plenty of hitmakers from the team's historic dynasties. The doc's official synopsis promises as much, and more:

"'Legacy: The True Story of the LA Lakers' captures the remarkable rise and unprecedented success of one of the most dominant and iconic franchises in professional sports. Featuring exclusive access to the Buss Family and probing, revealing interviews with players, coaches, and front office execs, this 10-part documentary series chronicles this extraordinary story from the inside – told only by the people who lived it."

That last part seems especially pointed, given that Abdul-Jabbar and other players have already shared their criticisms of "Winning Time" on the record. Abdul-Jabbar, who played center for the Lakers from 1975 to 1989 and later returned as an assistant coach, penned an incisive takedown of the show for his Substack newsletter. In it, he criticized the show's renderings of real-life people, saying that "each character is reduced to a single bold trait as if the writers were afraid anything more complex would tax the viewers' comprehension."

"Legacy" seems poised to elucidate some of these apparent blind spots. As shown in the trailer, it features exclusive interviews with many different members of the Buss family, whose takeover of the team in 1979 (led by Dr. Jerry Buss) marked a new era for professional basketball as fans and players knew it. The preview, a mix of talking head interviews and archival footage, outlines the honeymoon period after Buss' purchase of the team until, as O'Neal puts it, "the business of basketball kicked in."

"It is the real life 'Succession,'" Dallas Mavericks owner Mark Cuban says, as the camera points to each of the Buss family members in turn and a voiceover narrator describes "a family feud brewing" over who will run the team. This may be the non-fiction version of the Lakers story, but that clearly doesn't mean it won't have drama. "Legacy: The True Story of the LA Lakers" is set to debut on Hulu, though its release date has not yet been announced.

Read this next: The Coen Brothers Movies Ranked Worst To Best

The post Legacy: The True Story of the L.A. Lakers Teaser: Hulu Doc is a Mix of Winning Time and Succession appeared first on /Film.