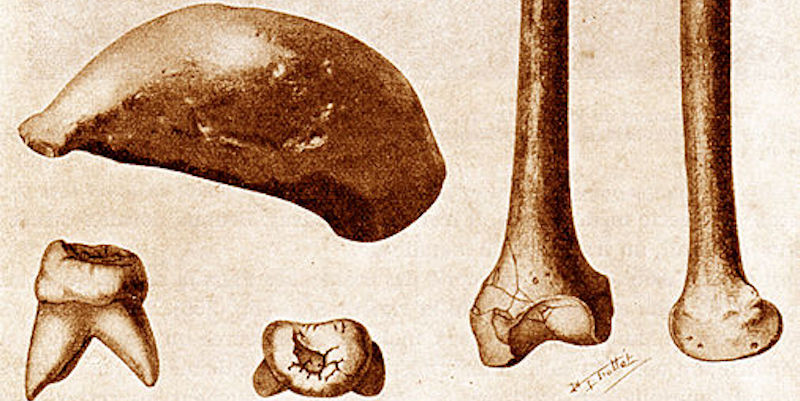 Homo erectus was much like us. But similarities can be deceptive. If we looked into the eyes of Homo erectus, we would not see the shock of recognition but rather the cunning of a predator, like a hyena or a lion. Homo erectus was disconcertingly inhuman.

Most mammals are born, grow up rapidly, reproduce as quickly as possible, and, as soon as their capacity for reproduction is spent, they die. The same was true for Homo erectus. Their young grew rapidly from infancy to maturity without the lengthy period of childhood that characterizes human beings. When they died, their bodies were ignored, left as so much carrion. Homo erectus lacked any concept of the afterlife. They had no visions of heaven. They feared no Hell. Most importantly, they had no grandmothers to tell them stories and act as reservoirs of tradition.

And yet, and yet—Homo erectus was the author of the most beautiful artifacts: those beautiful, expertly worked, teardrop-shaped, almost jewel-like stones known popularly as hand axes, the signature artifact in their stone-tool culture, the Acheulean.

The hand axe is so distinctive because it has more or less the same design wherever it is found, irrespective of its age or the material from which it is made. Its association with a particular species—Homo erectus—suggests that  hand axes, for all their undeniable beauty, were made according to a hardwired, stereotypical design. They were created as thoughtlessly as birds make their nests. If, when creating a hand axe, the maker made a mistake in the sequence of strokes required to chip it from a blank flint, they would not try to fix it or perhaps turn it to some other purpose. They would simply discard the mistake and start again from the beginning with a fresh blank.

This—to us—chilling inhumanity is underlined by the fact that no modern human has entirely worked out what hand axes were for. Although many are about the right size to fit comfortably in the hand, where they could be used as choppers, some are far too large for such a use. In any case, why bother? It’s very easy to strike an edge from a flint that’s sharp enough to, say, skin a carcass or remove flesh from bones. Why, then, go to the trouble to make something as complex and beautiful as a hand axe for the purpose? If one is going to throw stones—or even use a slingshot—to bring down prey or an enemy, why go to the trouble of creating a hand axe, if it is simply going to be thrown away?

Once within island Southeast Asia, the evolution of Homo erectus took some surprising turns.

We tend to think that items of technology have a purpose and that this should be evident from their design. “To see a thing one has to comprehend it,” wrote Jorge Luis Borges in his short horror story There Are More Things:

An armchair presupposes the human body, its joints and limbs, a pair of scissors, the act of cutting. What can be said of a lamp or a car? The savage cannot comprehend the missionary’s Bible; the passenger does not see the same rigging as the sailors. If we really saw the world, maybe we would understand it.

Our conceit comes from our tendency to attach to the elaborate construction of objects outside the body a kind of conscious direction or purpose that is distinctly and uniquely human. A glance at a beehive or termite mound or a bird’s nest will show instantly that this equation is false.

On the other hand, Homo erectus did, on occasion, do what appear to us some very humanlike things—such as scratch out hash marks on seashells. For what purpose, nobody knows. It’s also possible that Homo erectus mastered the art of sailing or canoeing into the open sea—as human an urge as can be imagined. As we have already seen, Homo erectus was the first hominin that learned to tame and use fire. Whatever else it was or did or thought, Homo erectus was one of evolution’s responses to the sudden shift in climate about 2.5 million years ago. Rather than retreating, as the remaining apes did, to the dwindling forests, there to live a kind of theme park existence as a memorial to a vanished past or trying to prise an ever-more-meager existence from the hardscrabble savannah, as Paranthropus tried to do and eventually failed, Homo erectus began to range more widely than other hominins had done, just to eke out a living from the unforgiving Earth.

Eventually, Homo erectus was the first hominin to leave Africa. By 2 million years ago, Homo erectus had spread across the continent. But it didn’t let the savannah grass grow under its feet. As a result of the change in climate, the forests had shrunk to such an extent that savannah rolled unbroken across Africa, the Middle East, and central and eastern Asia.

The endless grassland heaved with game, and Homo erectus followed it wherever it led. It was already pursuing the herds as far as China as long as 1.7 million years ago and perhaps even earlier. Three-quarters of a million years ago, Homo erectus made regular use of caves at Zhoukoudian, now in the suburbs of Beijing.

And as Homo erectus spread, it evolved.

Homo erectus was the protean progenitor of a huge variety of daughter species: comparable to giants and hobbits and troglodytes and yetis and—ultimately—to us. The tendency toward variegation started early. One tribe of Homo erectus that lived in Georgia, in the Caucasus Mountains some 1.7 million years ago, was of such motley cast that it is hard, from our modern perspective, to imagine that they all belonged to the same species.

By 1.5 million years ago, tribes of Homo erectus had penetrated island Southeast Asia. To do this they need only have walked. The sea level stood so low that most of the region was dry land. The many islands we see today are the half-drowned fragments of a region once much vaster in extent. Homo erectus lived in Java until at least one hundred thousand years ago—the last holdouts clinging on, as the sea level rose, and the jungle once again pressed in all around them.

They may even have survived long enough to witness the arrival in the region of their descendants—modern humans. If they met, the encounter would have gone badly for what, to modern humans, would have seemed like a large but secretive woodland ape, just one of several native to the region, such as the orangutan and its enormous cousin Gigantopithecus.

Once within island Southeast Asia, the evolution of Homo erectus took some surprising turns. Confined to islands as the sea level rose, various tribes, sundered from the mainland, evolved each in its own peculiar way.

One such reached Luzon, in the Philippines, where it hunted the native rhinoceros at about the same time as its mainland cousins were kindling sparks in eastern China. Once marooned, these people evolved into Homo luzonensis, a species of tiny size. As well as being small, they were, in many respects, primitive. With the return of the jungle, these hominins once again took to life in the trees. They survived until at least fifty thousand years ago. When the first modern humans arrived, these atypical descendants of an African savannah hunter must have stared down from the branches at the new invaders within comprehension and horror.

As strange a fate awaited another group of Homo erectus that reached Flores, an island well to the east of Java.

They made landfall more than a million years ago. This is in itself surprising, as they could not simply have walked there as their forebears had to other islands closer to the continent. Even when the sea level was at its lowest, Flores was separated from the rest of the world by deep channels.

It is possible that they got there by accident, perhaps having been blown on wings of storm, cast ashore by a tsunami caused by an earthquake or volcanic eruption and rafting on vegetation or other debris. This part of the world is, after all, no stranger to extreme events, and such accidents explain the existence on even the most remote islands of plants and animals.

Either that or they reached Flores by some form of watercraft, even if that watercraft was intended for fishing close in shore to another island and got blown off course.

However they got there, when they reached Flores, they, too, shrank in size over time and became what we know as Homo floresiensis. By the time they became extinct, around fifty thousand years ago—about the same time as their distant cousins in the Philippines—they stood no more than a meter in height but made tools as well as their ancestors had done, if on a smaller scale to fit smaller hands. 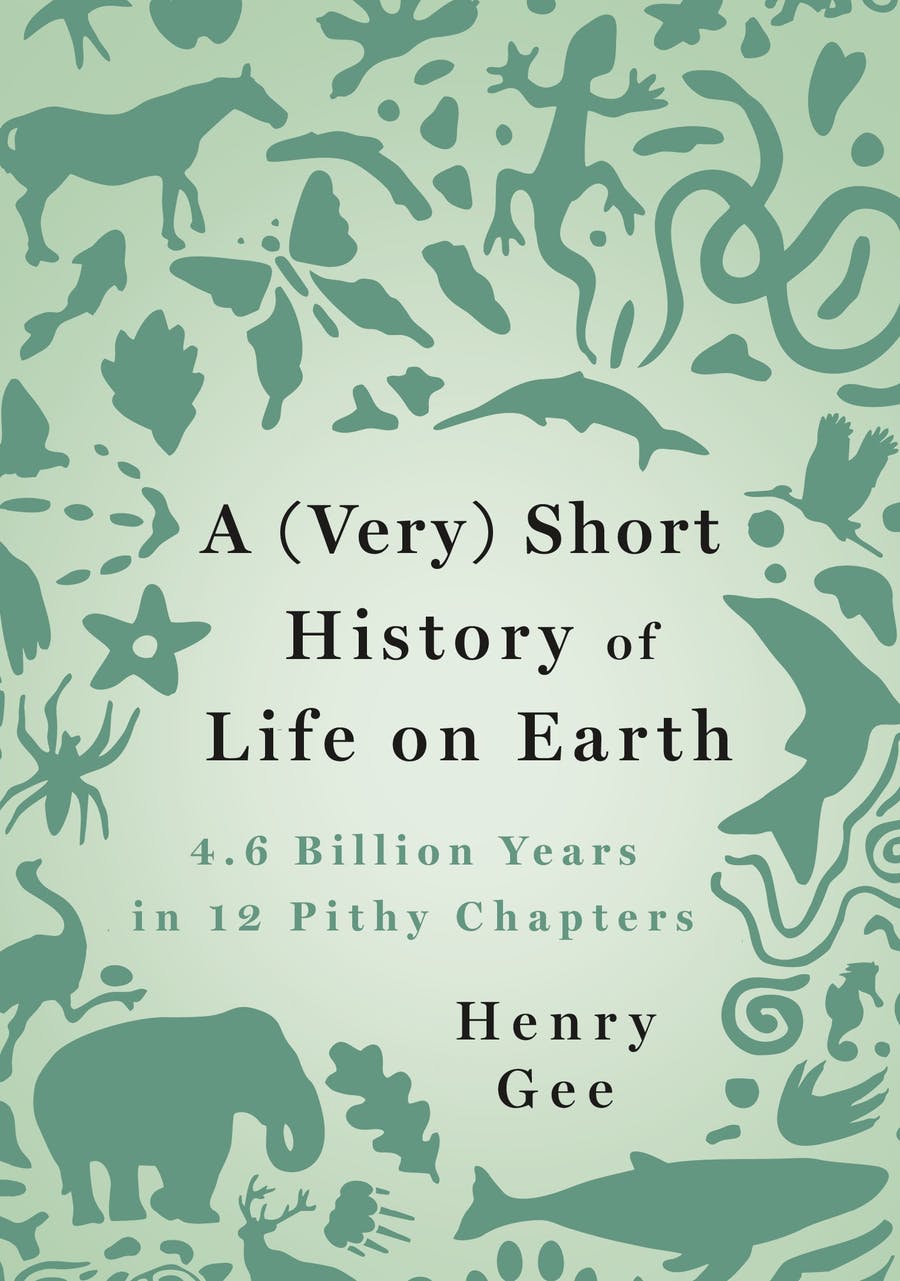 From A (Very) Short History of Life on Earth: 4.6 Billion Years in 12 Pithy Chapters. Used with the permission of the publisher, St. Martin’s Press. Copyright © Henry Gee 2021.