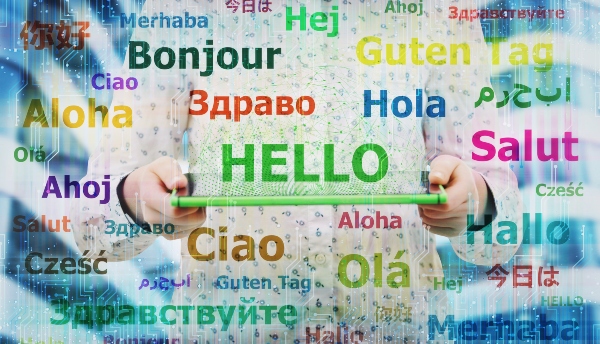 Words, words, words. They’re all around us, on toothpaste tubes, cell phones, cereal packets and television screens – and that’s before we leave the house! We read thousands of words every day and take our human ability to use language very much for granted. Yet language comprehension is a highly sophisticated process. Aided by technologies which track eye movement and brain activity as subjects respond to language stimuli, psycholinguistics expert Pia Knoeferle of Berlin’s Humboldt University studies how meaning derives from context and the interplay between linguistic and visual information processing.

Cutting edge technology is helping researchers track eye movement and brain activity to the millisecond in a bid to understand how we process language and extract meaning from what we see, read and hear. One of the leaders in the field is psycholinguistics expert Dr Pia Knoeferle from Berlin’s Humboldt University, where she studies how humans learn, use, and understand language.

As a discipline, psycholinguistics traces its history back to the early 20th century debate about acquired and innate behaviours. That distinction between the two was developed in the 1950s and 1960s by psychologists such as BF Skinner, who argued that all language must be learned, and the philosopher and linguist Noam Chomsky, who believed that humans possess an innate language facility.

Modern psycholinguists focus on various aspects of language, for example how children and adults learn language (acquisition and language learning), how language develops from an initial idea to the spoken or written word (production), and the processes by which a wide variety of language users understand language (comprehension). Dr Knoeferle’s work focuses on comprehension and what types of information in a sentence are used to build meaning. She is particularly interested in how context – especially visual context – contributes to language processing.

Dr Knoeferle’s research makes use of technologies which study ocular and neural activity to the millisecond, to record in real time how subjects respond to language stimuli. These include eye-tracking technology, which monitors the subject’s gaze and eye movements towards visuals during language tasks, for example when looking at text and images on a computer screen. It also involves the study of brain activity in response to a similar stimulus – called ‘event-related brain potentials’.

In a recent paper “Predicting (variability of) context effects in language comprehension”, published in the Journal of Cultural Cognitive Science, Dr Knoeferle presents an in-depth review of language processing theory. She focuses in particular on research into prediction in language comprehension; that is, how we can begin to understand and predict meaning before we actually encounter a specific word.

The development of technologies has further enabled the study of brain activity while people perform various tasks. Among the most notable findings for linguistics has been the discovery of event-related brain potentials – brain responses to words and other stimuli. Measured to around 400 / 600 milliseconds post stimulus – ‘the N400 / P600 effect’ – brain potentials show how quickly the brain reacts to expectations of a word and semantic associations (N400) as well as to structure-related processes (P600).

“Our immediate environment can affect language comprehension in real time.”

Dr Knoeferle looks at what the research literature says about context-focused approaches to comprehension. Studies have looked at verification and the interaction between listening and looking, for example asking subjects to verify a sentence in the context of a picture. Research has also considered ‘semantic priming’, in which brain responses to a second stimulus are found to be faster when that second stimulus is related to a first one (such as the word ‘cat’ following ‘dog’) than when it is unrelated (e.g., the word ‘disc’ following ‘dog’).

Other lines of research have included ‘construction grammar’. Instead of the traditional view that words (‘lexicon’) and language structure (‘syntax’) are distinct, this approach to linguistics argues that meaning and form are inseparable, and that constructions within sentences form the central units of language.

Following her extensive study of the literature, Dr Knoeferle identifies three key processes and associated mechanisms in language comprehension. Her paper discusses these processes at length in light of extant academic research. The first is “building structure and assigning an interpretation”. This includes forming a “mental representation” of sentence meaning which is “informed by linguistic and world knowledge, and the immediate linguistic context”.

The second is “grounding the interpretation in a model of the world/visual context”, for example via (internal/visual) attention guided by the language content or concept and associated personal experience. Finally, the third process is “verifying the structure and interpretation against representations of the world/ non-linguistic visual context and revising as necessary” and understanding by linking it to personal experience.

Dr Knoeferle argues that research approaches to date suggest that more attention should be paid to the potential differences between individuals. She writes: “Empirical research has provided more and more evidence that we must not only consider object and event contexts (and their associated representations) for developing theories of real time language comprehension but also (representations of) the listener and his characteristics such as age, or educational background among others.”

Dr Knoeferle’s research review leads her to conclude that context is important in language comprehension, but that context effects are variable, and some are more robust than others. She draws three conclusions. These concern the link between context effects and comprehender characteristics, the situation and environment in which language arises, and the comprehension process.

“Context is important in language comprehension, but context effects are variable, and some are more robust than others.”

Regarding how words relate to the situation and environment in which they arise, Dr Knoeferle finds there is a relatively direct and strong connection between action words and images, for example between seeing an image of someone painting and understanding the word ‘paint’. However, seeing someone smile is far more ambiguous and could relate to a range of things or words. They may be happy or amused, be looking forward to something, or be trying to cheer someone up, and related words could be ‘happy’, ‘amused’, or ‘compassionate’.

As a result, Dr Knoeferle argues that context has a greater effect for language that relates to things and events: “Referential cueing of information in visual context elicits – on average and by comparison – more rapid and stronger effects than non-referential mediation of visual context.”

Dr Knoeferle’s study aimed “to derive a more principled account of context effects” in language comprehension and her scholarly review of 40 years of psycholinguistics research and the concepts it has produced more than fulfils her brief. Providing ample evidence that language does not take place in a vacuum and cannot be separated from its (social) context,Dr Knoeferle equally finds that context effects are variable.

The use of eye-tracking and the event-related brain potential technology is particularly interesting. Are you working with colleagues in other departments to exploit the findings from these studies using other techniques?

My current research focus is not so much on the use of other techniques as it is on examining the role of context for a diverse range of language variety. Among that is language with figurative meaning, conveying biographical facts and their anchoring in time, as well as language that is contextualised in an informal or a formal situation. I have in the past worked with colleagues who were experts in computational modelling to more formally simulate contextually situated language processing.

Previously published on researchoutreach.org under a Creative Commons License.

If you believe in the work we are doing here at The Good Men Project and want a deeper connection with our community, please join us as a Premium Member, today.

All Premium Members get to view The Good Men Project with NO ADS. Need more info? A complete list of benefits is here.

The post How Context Influences Language Processing and Comprehension appeared first on The Good Men Project.