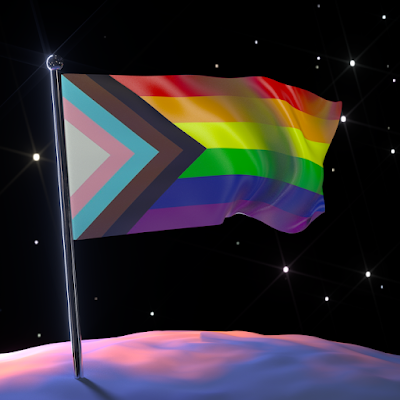 I want to talk about space. Outer space. Planets and stars and comets and all that. What is the unspoken bond that LGBTQ people have with space? Always loving the moon (rightfully so), commonly dabbling in astrology. Have you noticed this? Papi, what is so gay about space?

You know, this question takes me back. Not to anything in my past, but to the very foundations of ye olde advice column. Did you know people used to write in to ask things like “What is time?” and “Where does the wind come from?”

That must have been nice. All I get is “Did Adderall turn me straight?” and “My boyfriend is pretending to be Latino. Problematic?”

I enjoy the opportunity to answer a question like this. It’s refreshing to get to use my scientific expertise for once. I too have often asked myself: Fellas, is it gay to cast your gaze upon the night sky and contemplate your place in the vast universe? I mean, you’re basically thinking about a dude.

My answer? Yeah, space is gay. Not gay as in homosexual, but gay in the elemental sense. In the … well, in the cosmic sense. It’s about vibes, you know?

I think to understand why things like space or astrology or the supernatural or, I don’t know, “the ocean” are so appealing to queers, you have to look at it from the angle of the arcane. The mysterious. The unknowable. The things that exist beyond the province of human understanding. Not only the ooky-spooky stuff, though that’s certainly included, but also all the things that make you pause and go, “Huh.”

And why might one want to smuggle themselves out of the realm of human understanding and into the unknown? Well, SG, we queers tend to know a lot about the ordeal of being perceived and then being negotiated into rigid taxonomies that weren’t built with us in mind. There’s a flattening out that happens there. You might feel like you lose some of yourself.

From outside this little box comes the siren call of the arcane, the supernatural, and the unclassified. For better or worse (it really depends), I think people who’ve been failed by the powers that be are more susceptible to its song. This can lead you down all sorts of unlit paths; some good, some bad, all interesting.

I’m not saying I’m personally a huge investor in mysticism or astrology or what have you. I think those things can have problems of their own. But I’m a big fan of challenges to binaries and human constructs. I like the idea of the edge of human wisdom, where our biases tumble over the cliff and where our imagination has to take over.

If you ask me, space is the ultimate reminder that we don’t know much about anything. Space tells us there are colors, shapes, and life forms out there that by their very nature defy human comprehension. Were they to literally enter our orbit, they would not be folded into our preexisting perceptions, but instead rewrite them.

That’s a powerful thing, isn’t it? To acknowledge that possibilities might exist out there beyond what we can even imagine, that there are futures we can’t predict and that hold the power to rearrange everything we know. Will we ever inhabit them? I don’t know. But it’s a kind of freedom all its own, a privilege in life, to look up wherever we stand, take a breath, and dream up tomorrows.