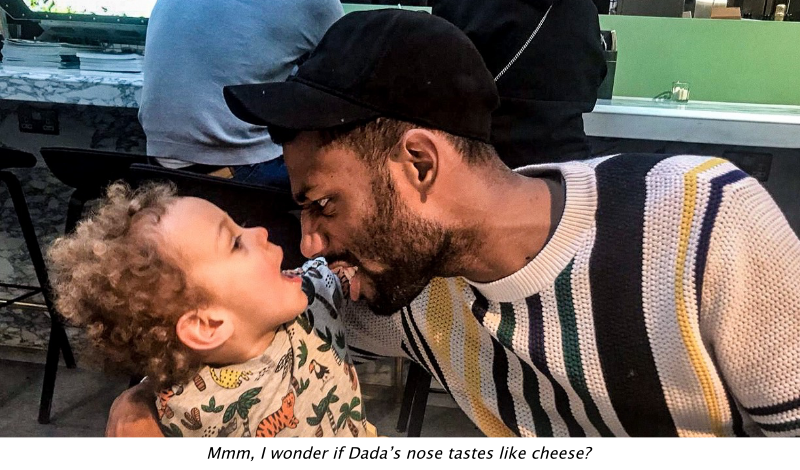 Hello! My name is Zachary and I am a biter!

I know, “What? Rehab? What kind of father sends him toddler off to a place like that?”, I hear you asking. Well, the kind that can’t handle the embarrassment of being the father of the zombie biter at the local nursery. The one who continually signs forms to acknowledge that his son mounted another child, bit their heads without permission and showed no remorse.

My lovely son, Zachary, was born in the wrong era; had he been born million years ago in the Jurassic period, he would have fit in perfectly with his cavemen predecessors. This large Neanderthal toddler who was born at almost ten pounds is a head taller than most of his peers and sadly evolution gave him a full set of teeth even before he knew what to do with them.

Genetics literally favoured his cannibalism. His brain chose physical development before any of the more essential mental or psychological wirings, and he was walking at eight months. Unlike his mates, that are starting to string full sentences, Zach communicates in a set of grunts, squeals and sporadic yells.

While this would be a sign of advancement in a tribe of !Kung bushmen, the only people who really understand him are us, his parents. “Oh oooh o” with some figurative gesturing indicates a requirement to be picked up. This may not be a problem at home, but I am sure you can guess what happens when there is a lack of comprehension elsewhere.

Maybe like his grandfather, he identifies as a lion. It could explain his need to assert his dominance in the nursery savannah. “Garr!”, which could mean anything from dinosaur, dragon, tiger to a lion. So what turned this lovely ray of sunshine into a baby version of Hannibal Lecter? After all, he doesn’t even eat meat at home.

Things got real when we were summoned to the nursery to discuss “behavioural problems” for our eighteen-month-old. We are always mortified of the biting episodes, and like most normal parents, we went through a series of destabilising thought patterns — Oh no was the other child alright? I hope the child is not traumatised? Will he get kicked out of the nursery and will we have to quit our jobs? What else were we doing wrong as parents? Does he have rabies?

We were given some forms to sign which permitted for the nursery to pay special attention to him. These were the same forms that other children with developmental problems were required to sign to give consent to discuss issues with external specialists.

Besides the fear of seeing my son being sent to the London Zoo for obedience training and circus career development, we were not ready to sign forms that allowed our baby to be labelled just yet. His issue may well have been that he was just eighteen-months-old! He was also teething and may have felt a natural urge to put everything (including other children’s heads) in his mouth.

However, it was not behaviour; we wanted to let slide and decided to take a proactive approach to try and deal with it. I spent some time doing internet research on serial biters — Hannibal and Ozzy to name a few— and even visited a farm to study baby goats. My wife, the more useful and productive half, spoke to other mums, a health visitor and read a couple of books on the subject.

We both came up with similar conclusions. We found out that the first rule of bite club was that you don’t talk about bite club. We did not want it to form part of his identity, so where possible we tried not to stress on the act of biting but rather the consequences associated with the biting.

We noticed that he didn’t particularly feel great after an episode of biting and did not like seeing another child or adult — oh yes, he bit us as well — in pain. He was either too frustrated or angry or tired that his primal instincts just override the normal circuitry in his head — a case of acute short-circuiting of the brain.

He was also getting upset about it when he saw our expressions during the conversations with the nursery staff, so we had them outside his classroom or at the office before we picked him up. It helped to have conversations with the nursery staff who were happy to work together to nip it in the bud. Teaching him to start saying sorry to the victim also helped to associate the right feelings with the action.

While there was a lot of NO BITING said at home, there was no telling off or yelling. Just because his wires were crossed, didn’t mean ours had to be. We were teaching him to contain our emotions. We did occasionally break this rule as you are sometimes caught off guard, like when falling asleep on your shoulder and he decides to sink his fangs into your skin. At the nursery, they made him aware that it was not right and paid attention to the other child which made him observe the discomfort and pain caused to someone else.

I guess we all knew it was a phase, but it seemed to go on for ages and seemed to get worse before it got better. At one point, I was having a couple of beers and seriously thought a muzzle might be a good idea. However gradually it began to work. He started realising that being a cannibal doesn’t get you far in life. When I initially wrote my thoughts for this, it was a month ago, and to me, it seemed like he would still be biting in another three months to come.

We have since not signed a single bite form. I can’t say I miss the calls from the nursery, but they were very collaborative in working together with us and were able to identify some triggers which helped prevent such salient attacks. It also helped my wife and I get to know Zach better and worked to develop his communication. Biting was his form of language, and by using other outlets of expression, he found biting less appealing.

This post was previously published on A Parent Is Born and is republished here with permission from the author.
—

If you believe in the work we are doing here at The Good Men Project and want to join our calls on a regular basis, please join us as a Premium Member, today.

Need more info? A complete list of benefits is here.

Talk to you soon.

The post Ground Control to Major Dad: We Have a Biter! appeared first on The Good Men Project.