The truth is coming to light.

Yesterday, I overheard a public school teacher and mother of several children express an honest opinion about education during the pandemic. Schoolwork varies by teacher and school district, she noted, with some doing almost nothing at all, while others send out huge packets of worksheets. About the latter, she disgustedly said, “It’s just busywork!”

She doesn’t seem to be the only parent noticing this. As the period of makeshift education at home lengthens from weeks to months, more parents are letting school slide, Leslie Brody explains in The Wall Street Journal. Among other things, parents are frustrated with hovering teachers who continually remind children to wash their hands or get to class, or math classes that “end in tears” because they are “too boring and repetitive.”

Some parents are trying a new tack, Brody reports:

“Jessica Sansone, a Pilates instructor in Brooklyn, said her fourth-grader, Mateo, tunes in to 30-minute virtual meetings with classmates daily, but she lets him ditch most assignments. She carves the day into half-hour sessions to give him structure, and lets him skip writing so he can read his favorite books, such as the ‘Wings of Fire’ fantasy series about dragons. She said his teacher has been supportive.”

I think she’s on to something. So much so, that I’m going out on a limb to suggest that parents should let their younger children ditch school altogether for the next few months.

I can almost hear the gasps. “How can we advocate for children to get even more behind in a time when they’re losing academic ground by leaps and bounds?” you might ask.

You misunderstand. I’m not advocating for children to give up on school and get more behind. Instead, I believe that children may actually get ahead with this plan.

Here’s the deal. After studying educational methods and practices for a number of years, I’ve come to the conclusion that one of the best things parents can do is teach their children to become life-long learners. How does one do that? Simple. Teach them to read and love books. If they know how to do those things, then a whole world of learning is opened to them.

Nor am I alone in this assessment. In her book, “The Read-Aloud Family,” Sarah Mackenzie observes that parents and schools kill children’s natural interest in reading by forcing them to conform to required book lists or regurgitate a book’s content via reports or tests.

“We do it without realizing it, and we do it with the best intentions…” Mackenzie assures us, “But good intentions can end in disaster.”

“The adults I know who read for pleasure do not make dioramas, take comprehension quizzes, or write five-paragraph essays on a story’s main conflict or theme. Real readers enjoy books that pique their interest and curiosity. They talk about them with friends. Sometimes they join book clubs. At those book club meetings, they might enjoy food and drink while discussing open-ended questions. They ask questions that help everyone think more deeply about the book and about what the author might have been trying to say. Questions about what the book might be saying to us.”

Can this method work? Can we really risk our children’s futures by pulling them out of their makeshift online classes and having them read instead?

For an answer, I point to Mackenzie’s tale of Jonathan Auxier. Despite living in a book-loving family, Jonathan was floundering in reading. Trying to rectify this, Jonathan’s mother pulled him out of school and began homeschooling him during third grade.

“The main requirement,” writes Mackenzie, “was that he read for three hours per day.”

“Now, Jonathan wasn’t told that his mother had pulled him out of school in order to help him fall in love with books. But she wisely realized that Jonathan would only learn to love reading if he disassociated reading with schoolwork. He needed plenty of time for reading, and he needed the opportunity to choose books he wanted to read—not just books that were assigned to him. She also knew that Jonathan needed to take on the identity of a reader for himself. She couldn’t do that for him. All she could do was set up the circumstances to make it more likely to happen.”

Did it work? Considering that Jonathan went back to school the next year as a “very strong reader,” and that he eventually became an “award-winning writer of middle-grade novels,” I think it’s safe to say that it did.

So give your younger children a treat. Tell them that they’re off the hook for school for the rest of the year. But in place of that, they must read. Have them read the books they like, read some books you choose, or listen to audiobooks while they draw or build Lego creations or do chores.

In between your work schedule, read books together as a family. Talk about them at the dinner table. Write fan fiction off the stories you read. Act out a favorite scene from a book. Turn certain phrases into buzzwords that your family can laugh over. In general? Have fun.

Who knows, you might be surprised when all this is over. Instead of being behind, your children may actually be ahead. 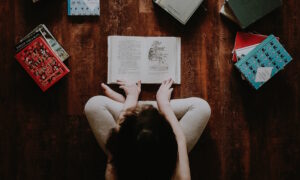