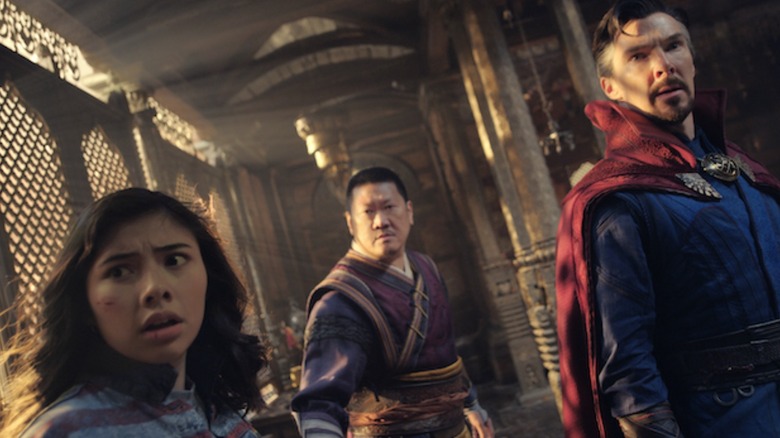 Sam Raimi's "Doctor Strange in the Multiverse of Madness" is a highly-anticipated MCU entry, especially with the prospect of the multiverse opening endless, maddening possibilities (and presenting variants of familiar characters). However, somehow, it gets better. In an exclusive interview with Fandango, Raimi has revealed that "Multiverse of Madness" has the "flavor of horror," being the first Marvel film with elements that are spooky, and veer into the ominous, unknown caverns of space-time. And Raimi is certainly someone who knows a thing or two about horror.

The Multiverse Holds Many Horrors 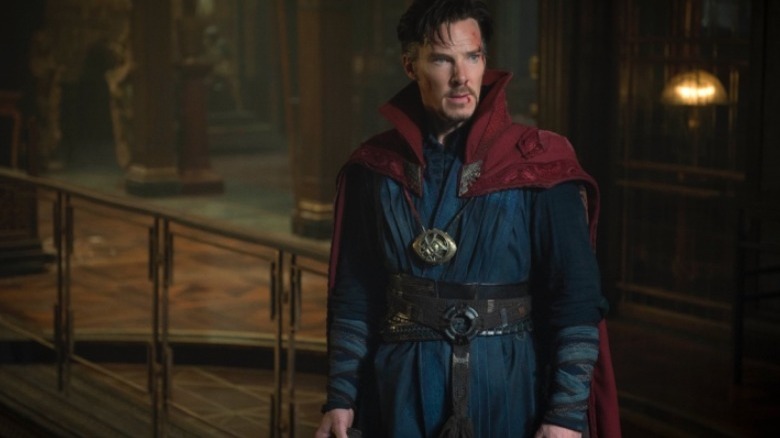 "Doctor Strange in the Multiverse of Madness" is bound to be a film that is wide in scope, given it will deal with the direct repercussions of the events that took place at the end of "Spider-Man: No Way Home." Strange (Benedict Cumberbatch), now no longer Sorcerer Supreme, will have to seek the help of his allies, such as (possibly) America Chavez (Xochitl Gomez) and Wanda (Elizabeth Olsen).

While the question of Wanda herself and the path she might take is shrouded with mystery, the opening of the multiverse cannot be a good thing, given that sinister variants lurk at every corner and timelines have branched on their own accord. The absolute chaos of the situation is bound to be entrenched in horror, as part of what makes us afraid are things we do not know about, possibilities that are beyond comprehension, and meeting versions of oneself that are covert in their own motivations.

Raimi clarified Marvel chief Kevin Feige's statement as to why fans of "Evil Dead II" will be happy with the upcoming film, saying that while it will not be an all-out horror film (of course, no chainsaw hacking in the multiverse), it contains elements of the genre throughout:

"I think what [Kevin] meant, from my point of view, is that this film has a flavor of horror to it. I think when the original director, Scott Derrickson, and Kevin promoted the coming of Doctor Strange in the Multiverse of Madness, they said that it was going to be the first Marvel superhero film that had an element of horror to it. I hope I'm not misquoting them. But even after Scott left the picture due to creative differences, that was still the mandate -- to make the first Marvel film that had an element of horror. So, I kept true to their original statements.

I think that's what Kevin means, because it is spooky at some times and scary at others. It's unknown what you'll find in the multiverse. It's within that unknown that suspense and darkness exists. A tool to titillate the audience's fear. Plus, Doctor Strange in the comics has always dealt in universes and dimensions that were quite spooky, so we tried to bring some of that into this film."

That sounds intriguing, to say the least, and as Raimi himself has commented about titillating audience fears, "Multiverse of Madness" might just be able to achieve that to good end. With variants of Strange's ex-lover Christine running around (and vanishing), and the possibility that dark entities may enter Strange's world at any given moment, the narrative might indeed take a darker, more sinister turn.

"Doctor Strange in the Multiverse of Madness" hits theaters on May 6, 2022.

Read this next: 11 Marvel Comics Villains We Really Want To See In The MCU

The post Doctor Strange in the Multiverse of Madness Has The 'Flavor of Horror,' Sam Raimi Teases appeared first on /Film.