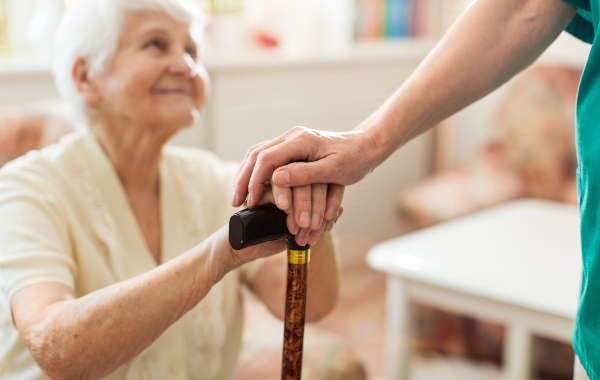 To meet Dick Osborne, you’d never know that a mild electrical current is being sent to his brain. It’s that current — delivered through a procedure known as deep brain stimulation — that keeps the debilitating symptoms of Parkinson’s disease from disrupting the 80-year-old’s life.

“Amazing” is how Osborne describes his results following his deep brain stimulation procedure performed in March at University of Michigan Health. But getting there was a long journey, with the ups and downs many Parkinson’s patients experience.

Parkinson’s disease is a chronic and progressive movement disorder caused by irregular electrical signals in the areas of the brain that control movement. Symptoms often begin with tremors in one hand or leg; stiffness of the arms, legs and trunk; and slowness of movement. Although more common in those over the age of 60, approximately 10% of individuals with the disease are under 50.

For patients like Osborne whose condition fluctuates throughout the day, deep brain stimulation is often the recommended treatment. With DBS, a current of electricity stimulates the cells in a specific part of an individual’s brain. The current reaches the brain through wires, or leads, attached to a small pacemaker-like device implanted under the skin near the collarbone or chest area. This device, a neurostimulator, delivers a specific amount of current to the brain based on an individual’s symptoms.

Osborne recalls tremors in his left leg that began more than nine years ago. Although he was hoping for a different diagnosis, he wasn’t surprised when he heard the words “Parkinson’s disease.”

“The tremors in my leg concerned me enough to see a doctor because I thought of Parkinson’s disease as a possibility,” he said.

Osborne and his wife, Jessie, had just moved from their home in New Hampshire to be closer to their youngest son, University of Michigan Health vascular surgeon Nicholas Osborne, when the diagnosis was made by neurologist Daniel Leventhal, M.D., of U-M Health.

Prescribed the medication carbidopa/levodopa (Sinemet), commonly used to treat Parkinson’s, Osborne says the impact the disease had on his life was minimal, with only a slow, “hardly noticeable” increase in symptoms over the next seven years. But in 2020, after the couple had moved from Michigan back to New Hampshire, Osborne’s symptoms began to escalate. One symptom in particular was dyskinesia, an involuntary and repetitive body movement. For many Parkinson’s patients, dyskinesia is a side effect of carbidopa/levodopa.

“I was having episodes of dyskinesia that were lasting 2 or 3 hours at a time,” said Osborne, noting that his quality of life was significantly impacted.

As a result of his move back to New Hampshire, Osborne switched from his U-M Health neurologist to one relatively close to home at Dartmouth Hitchcock Health. But his ties to U-M Health would continue.

“Our sons Nick and David, an emergency medicine doctor at the Veterans Hospital in Miami, and my neurologist at Dartmouth, Dr. Mary Feldman, began to talk to me about a surgical procedure called deep brain stimulation,” said Osborne. He discovered that DBS has been performed on Parkinson’s patients at U-M Health for nearly 20 years and though not a cure, the procedure offers some degree of improvement in symptoms for most patients.

With the goal of realizing even a small improvement in his quality of life, Osborne decided to undergo the comprehensive evaluation process at U-M Health.

“We made two trips to Michigan in the fall of 2021 and through a series of meetings with the six-person team that oversees the DBS program, it was determined that I qualified for the procedure,” said Osborne, noting that he and Jessie were also confident in U-M Health surgeon Emily Levin, M.D., who would perform the procedure.

“We were impressed with her excellent track record,” said Osborne.

Although typical Parkinson’s candidates for DBS are in their sixties or early seventies, Osborne proved to be a good fit, says Levin.

“He is a very healthy individual, so despite his age, we felt he would benefit from the procedure. We look also for patients who have had a good response to medications in the past, but for whom the medications are no longer working well enough to control the symptoms, including stiffness and shaking.”

“Before the DBS, I wasn’t good for much of anything, but now things are very different.”
Dick Osborne

While other health centers perform DBS in two procedures, the U-M Health team typically performs it in one.

“This is another big advantage of having the surgery at U-M Health,” said Osborne.

During the seven-hour surgery, performed on March 21, Osborne says he was awake for part of the time.

“The surgery is done with the patient awake for a portion of the time, and mildly sedated for some of the more uncomfortable parts,” said Levin.

During the procedure, wires, called “leads,” are implanted inside the brain and the small neurostimulator is implanted under the patient’s collarbone or chest area, similar to a heart pacemaker. Continuous pulses of electric current from the neurostimulator pass through the leads and into the brain to test for accuracy.

“We confirm the leads are placed correctly by asking the anesthesiologist to stop the sedative so the patient can wake up and participate in the operation by letting us know of any symptoms such as stiffness or shaking they may be experiencing,” said Levin.

Following DBS, Osborne was in the hospital for one night, then discharged to stay with his son and family as he recovered.

“A day after the surgery I had trouble carrying on a conversation and my comprehension was scrambled while reading – but only for two or three weeks,” he said.

A month later, it was time to program the system and control unit. The two-hour programming was coordinated by U-M Health neurologist Kelvin Chou, M.D., who has extensive expertise with DBS devices.

“The initial programming is done approximately one month after the wires are implanted as some patients experience swelling in the brain,” said Chou, noting that the programming is scheduled for early morning when a patient is free of Parkinson’s-related medications.

“During this visit, we test the DBS system to find the best spot to deliver the current in order to improve symptoms,” said Chou. “Follow-up programming visits are then scheduled every couple of weeks to fine tune the stimulation.”

While the programming process can take multiple visits over a span of up to six months to ensure optimum results, “Mr. Osborne had a great response to DBS and required only a few sessions,” said Chou.

Osborne couldn’t be happier with his results.

“Following the programming, my tremors all but disappeared,” he said.

The successful procedure allowed him to decrease the amount of carbidopa/levodopa —from eight pills a day to only two — significantly reducing his symptoms.

“I still have mild dyskinesia, but for shorter periods of time and it’s not disruptive or debilitating,” he said.

Moving forward, Osborne will have regular “tune ups” overseen by his Dartmouth neurologist.

“At my last visit with Dr. Feldman in June, she said the neurosurgeon, Dr. Levin, who did my surgery must have located the probes in my brain exactly right, for she has seldom seen a better outcome,” said Osborne.

“I’m aware there’s no cure for Parkinson’s and that I can get worse over time. But right now I’m happy,” he said. “Before the DBS, I wasn’t good for much of anything, but now things are very different. I stay active with driving, shopping, gardening and mowing the lawn. I have a pretty normal life now.”

This post was previously published on healthblog.uofmhealth.org under a Creative Commons License.