Consider This has mostly been an exploration of resources used a bunch of different ways, but we also can consider how different curriculum topics can be used to target many speech and language and social communication objectives (and in this case, some resources that go with this idea). Speech and language pathologists can wrap interventions in contexts; check out this recent study, one that I'd like to describe in detail at some point, on science and Tier 2 vocabulary.

I think of civics as important world and social knowledge. Though it's unlikely to fix everything, we could do worse than helping students understand how government and laws work. Within civics contexts, there's much opportunity to target narrative, expository language, reading comprehension, vocabulary, and sentence formulation.

Years ago, Social Thinking® recommended Munro Leaf's (quite old) picture book Fair Play, which in its opening pages explores social norms in terms of moving from why we don't all get to do everything we want to do to why we have government. There are also several vignettes about a character he calls JustMe who behaves without considering others's needs that Social Thinking® formulated into a concept around JustMe vs Thinking about Others. We want to handle this topic with nuance and acknowledgement that everyone has JustMe "moments" to model the concept carefully, of course. The book is hard to find, but there is a read aloud version below. Skip the weird intro, consider handling the JustMe vignettes with further nuance, e.g. what the kids could have done to help JustMe be part of the group, and avoid the latter parts which are just way too harsh! I have generally used just up to about 4:30

In a much more straightforward way, iCivics remains a very useful tool. Sign in as a teacher and you can access lesson plans, worksheets, and of course the interactive games (varying in length, so explore) which can open up great expository conversations and vocabulary development. Sign-in also allows you to save games and pick up in later sessions. Recently I used Cast Your Vote with some students to explore the local election process and vocabulary like infrastructure, juvenile, enrollment, and minimum wage. 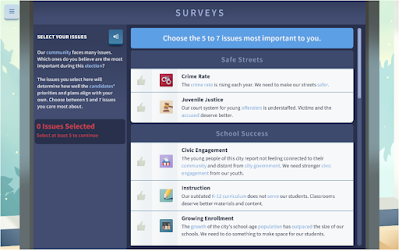 Fablevision's Civics! An American Musical (free with signup) will delight fans of Hamilton and engages students in civics topics while targeting comprehension of primary sources. The language underpinnings, however, include situational interpretation of pictures and comprehension of texts. The game contains multiple paths you can return and reroute to (e.g. making a few musicals about a few different topics, if you have a group that gets into it), and again, saves your progress. 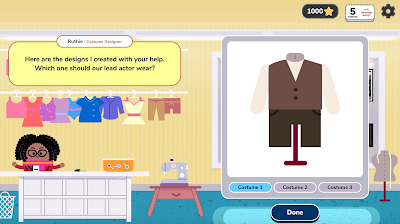