Every movement contains a range of viewpoints, from moderate to extreme. Unfortunately, Americans on each side of the political spectrum believe—incorrectly—that hard-liners dominate the opposite camp.

After the killing of George Floyd last year, for example, liberal protesters across the nation pushed for criminal-justice reform, and many of the specific changes they sought enjoyed a lot of popular support. Even recent polls have shown that, regardless of political affiliation, most Americans remain in favor of police-accountability measures (such as body cameras and a registry of police misconduct), the banning of choke holds, and tackling racial injustices head on. Some activists went much further, though, demanding the complete elimination of police departments. Conservative pundits noticed. Soon, the Fox News host Tucker Carlson was presenting call after vivid call to abolish or radically defund policing. “They would like to eliminate all law enforcement for good,” he told viewers.

But supporters of police abolition are the exception, not the rule, on the American left, according to research that my colleagues Matthew Feinberg, Alexa Tullett, Anne E. Wilson, and I conducted. In late October 2020, we asked more than 1,000 people in the United States whether they agreed that “police departments are irreversibly broken and racist, so the government needs to get rid of them completely.” Only 28 percent of the self-described liberals even somewhat agreed, indicating that this was not a solid consensus on the left.

Although far out of step with what most liberals actually thought, Carlson’s sampling of liberal views was emblematic of what conservatives believed about liberals. Conservatives in our sample estimated that 61 percent of liberals—more than twice the actual number—endorsed the abolition of law enforcement. This is a striking example of what plagues our politics: a false polarization in which one side excoriates the other for views that it largely does not hold.

Left-leaning readers might not be surprised that conservatives would accept as widespread a caricature of the radical liberal, given that they are so clearly blinded by racism or pro-police sentiment that they would excuse even the most unjust excesses of force. But wait—is this portrayal of conservatives accurate?

Just as liberals came to rally around #BlackLivesMatter, conservatives gravitated to #BlueLivesMatter. From the vocal conservatives who made excuses for misconduct or blamed victims, some liberal commentators concluded that the right is dominated by police apologists. In fact, many on the right recognize both the humanity and hardship of police officers and those harmed by them. When we asked conservatives if police were almost always justified in their shootings of Black people, only 31 percent of respondents even somewhat agreed with the sentiment. Liberals, on the other hand, estimated nearly double that number of conservatives—57 percent—gave police a free pass.

Some caveats: Our research, which is available as a preprint, is under review and subject to change. We drew our large samples of respondents from online survey platforms, not from nationally representative polling. We recognize that this sample—and therefore our estimates of the prevalence of liberal and conservative opinions—is not an exact microcosm of the country. Still, other researchers have concluded that these platforms are reasonably comparable to nationally representative polling.

The gap that we identified between what partisans really think and what their opponents think they think shows up again and again—but only on a particular kind of issue. People have a more accurate view of the other side’s position on many standard policy issues, such as taxes or health care. But specifically on culture-war issues, partisans are likely to believe a caricatured version of the opposing side’s attitudes. These misconceptions have hardened into enduring stereotypes: liberal snowflakes and free-speech police, conservative racists and “deplorables.”

In reality, just a third of liberal participants agreed even a little with banning controversial public speakers from college campuses, but conservatives estimated that 63 percent of liberals held that view. Only 22 percent of conservatives expressed hostile and unwelcoming attitudes toward immigrants, but liberals thought that 57 percent of them did. Our data suggest that many people are walking around with an exaggerated mental representation of what other Americans stand for.

Where do these ideas come from? Partisan media outlets have an incentive to stoke their audience’s outrage by making extreme views seem commonplace. In our work, we saw that the more people reported consuming partisan news (a category in which, drawing on the work of other researchers, we included Fox News and MSNBC), the more they believed in a caricatured version of the other side.

People’s perceptions of others are powerful, even when they’re wrong. We found that people disliked their opponents primarily for the fringe views most opponents didn’t actually hold. Worse still, partisans who disliked their opponents most were least willing to engage with them, which likely forecloses the chance to have their misperceptions corrected through real-life personal contact. Instead, an oversimplified, exaggerated version of the other side’s views is allowed to live on inside of everyone’s head.

What’s more, partisans told us they were hesitant to voice their opinions about the most extreme positions expressed by people on the same side of the spectrum. For example, liberals were less keen to talk publicly about the downsides of censoring free speech than they were to talk about the benefits of universal health care. So although a majority of liberals opposed censorship, their reluctance to criticize it openly might have led conservatives to think that most on the left favored it.

So what should politically minded Americans conclude from our research—that, gosh, their opponents are just like them, and everyone should join hands in the center? Nope. Some policies—and some partisans—deserve forceful opposition, even contempt, from the other side. Vigorous disagreement, both within and between parties, is essential in a functioning democracy. But democracy also requires at least some level of mutual comprehension. No matter where people are on the political spectrum, they ought to know whom they’re fighting with and what they’re even fighting about. 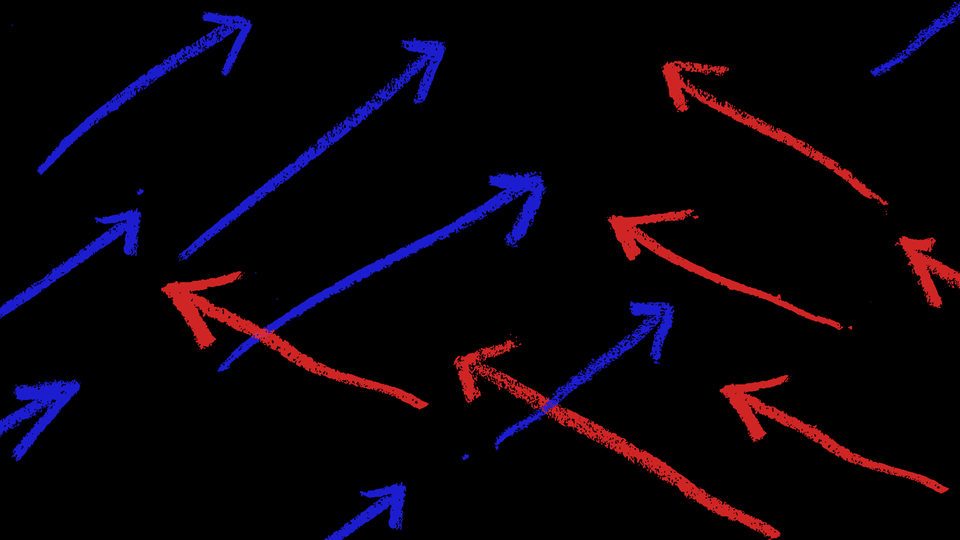