Your cart
This week has been full of themed days, in the hopes that it would keep my kids entertained and engaged enough to stick with us through this distance learning.  My last post was about our venture into Unicorn day, so I thought I would keep it up and tell you about the rest of the week.  I kept with the "unknown creature" theme all week since, well, I think it is fun ;)   So here are the other three themed days we did during this short week.
Alien Day 👽 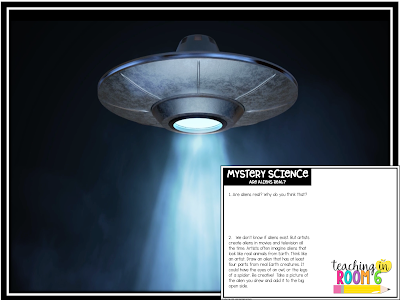 Since the Space X launch was supposed to happen on Wednesday (though it was eventually rescheduled to Saturday),  I thought an Alien Day went well.  We started with the video "Are Aliens Real?" from Mystery Science.  It is a very short, simple video that has lots of good information for the kids to think about regarding whether or not there are aliens living in the universe.   I took the questions that Mystery Science provided and typed them onto a slide for the kids to answer and turn in to me. 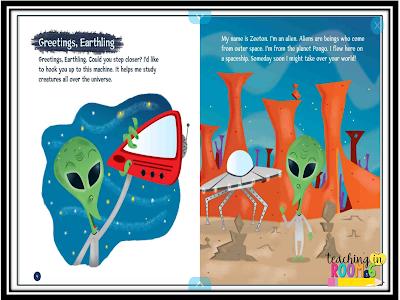 Then, we read the story "I'm from Outer Space!" on Epic.  The story was an easy read but gave me a chance to hear some of my students reading aloud.  The kid all followed along as we read together.  We managed to get through the whole book on our Zoom lesson.
Now, one of the questions for the Mystery Science page was to draw their own alien.  So, using that as a base, I asked the kids to think about what the alien did in the story we read together.  They needed to then write their own story about the day in the life of that alien!   This was to be a NARRATIVE, written in first or third person, but telling the story.  Not just information about what an alien would do.  I asked for specific details, even using figurative language (as we have been learning that in class.)  I wanted them to be creative when using their writing skills.  They used this template here for their story.
I also assigned some things to do with the launch of the Space X shuttle that I got from Susie at Panicked Teacher.
Bigfoot Day 😸
We started on Epic watching a 2 minute video entitled "I am a Monster:  Bigfoot".  It was a cute way to introduce the legend of Bigfoot.  (there is also a Colossal Questions video on there that is good for some nonfiction information about Bigfoot.)  Then I opened the book entitled "Bigfoot", which is a nonfiction book with all of the facts known so far about Bigfoot.  We read that aloud together over Zoom. 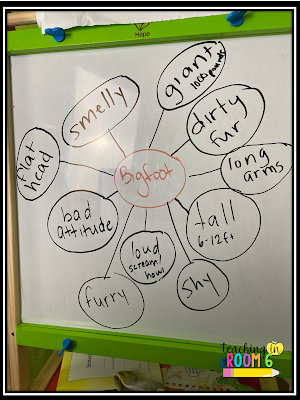 We then took all of the descriptive words that the book mentioned about Bigfoot and created a bubble map.  We were sure to grab the info from the book and use it in adjective form on our Bubble Map.  They then were to take that map and independently write a descriptive paragraph about Bigfoot. (I just had them write on a Google Doc.  No pre-made template for this one, though I did link it on the Google Classroom feed for them to easily access it.) 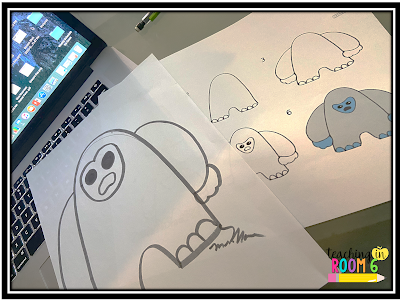 Next came a directed drawing of a Yeti.  While reading the story, we discovered that a Bigfoot and Yeti are basically the same creature, just that they live in different places.  So that was a good transition to this  drawing of a yeti.  We used this step by step drawing.  It was a super easy drawing to do with the kids and didn't take very long at all.  They took a picture of their final drawing and inserted it into the slide here.
After the drawing, I "took" them on two roller coaster (both Disney OF COURSE!) because they had a Yeti theme to them -- Matterhorn at Disneyland and Expedition Everest at Animal Kingdom. We "rode" the coasters, then discussed the differences and similarities between them.  Then, just like they did during Unicorn Day, the kids filled out a Double Bubble Map comparing and contrasting the details in both coasters. 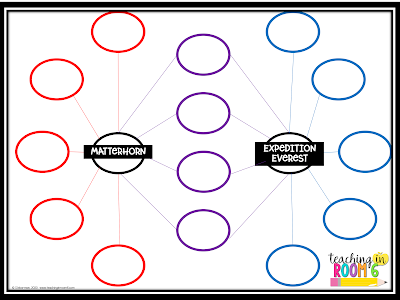 Mermaid Day  🐬
This was the last day of the "mythical creature" days.  On this day I purposefully kept the assignments light, as I wanted them to finish all of the other assignments throughout the day.
We began by discussing the most famous mermaid they knew, Ariel the Little Mermaid.  I took them on the Disneyland ride, just to remind them of the basic story line.  We then listed the basic story points from beginning to end. (I just wrote them on my whiteboard.  The kids didn't copy this down.)
Then on Epic, I found The Little Mermaid tale that is very close to the original Hans Christian Andersen tale, without the violence.  We read that aloud together on Epic.  I used this opportunity to hear all of the kids read.  It was a good way to get some fluency in.
Afterwards, we discussed how the endings of all the tales were different.  I had mentioned how in the original tale the mermaid just becomes sea foam and that is the end.  We talked about why the authors for all of the stories might have changed the endings each time.  The kids had some interesting ideas about the authors' motivations.  I then gave the students the assignment of rewriting their OWN ending to the story of the little mermaid.  They were to be creative and think about how they thought it should end.  It was to be a NARRATIVE ending, so a true story ending, not an informational this-is-what-happens type of thing.  I just had them type on a Google Doc (no pre-made template on this one.) 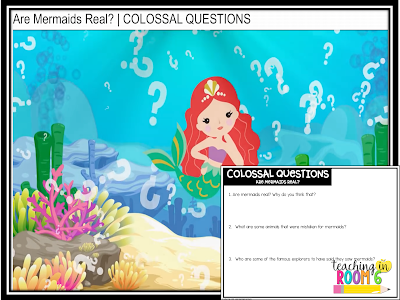 We then watched the short Colossal Questions video entitled "Are Mermaids Real?" and looked at the evidence presented there.  I then used that video and wrote some easy comprehension questions that the kids could answer, using the video as evidence.  They were to use the RACE strategy and answer these with evidence from the video.
Finally, for a little creative spin, I asked the kids to create their own Mermaid tail (similar to those blankets many of the kids have) giving it a personal twist.  The were to use this mermaid tail template (or just draw their own) and decorate it with colors and designs that were personal to them.  The kids got a chance to be creative and have a little fun!  They came out so cute!! 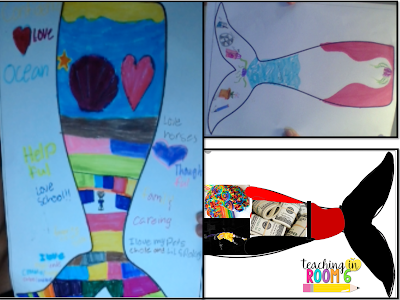 And that was that!  We have a lot of fun over these three days (four if you count Unicorn Day from the other post!)  It was something that kept the kids focused and on task, as well as kept them interested in our class.  Zoom went so smoothly and flowed well.  I can't wait to do more of these over the next few weeks!