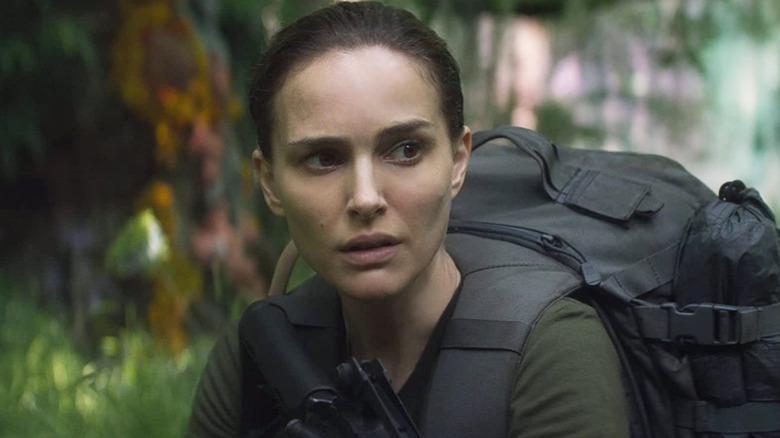 Calling your movie "Men" isn't exactly the most subtle way of telling the world you've made a film that looks at masculinity. But for writer and director Alex Garland, it's been a long time coming. The first movie he ever wrote, the 2002 pandemic thriller "28 Days Later," climaxes in a third act where rage-fueled, zombie-like entities become a backburner concern to a pack of violent military men with a vile plan for how to rebuild the world's population. His directorial debut, 2015's "Ex Machina," deals with related issues, bringing gender to the forefront of its distressing spin on the creator-creation story. Although it's Garland's 2018 film "Annihilation" that may have the most in common with "Men."

"Annihilation" centers on Lena (Natalie Portman), a biology professor who is recruited by the U.S. government to lead an expedition into a mysterious iridescent electromagnetic field dubbed the Shimmer. Lena's husband, a soldier named Kane (Oscar Isaac), led an earlier mission into the area, only to emerge as the sole survivor before quickly falling ill. Through flashbacks, the film reveals Lena had an affair with a colleague named Daniel (David Gyasi) that Kane found out about. Believing Kane only took on the mission because he knew he likely wouldn't make it back alive, Lena is driven by her guilt to enter the Shimmer and find a way to help him.

"Men," as with "Annihilation," begins with a woman in turmoil. Jessie Buckley stars as Harper Marlowe, a young widow who rents a secluded house in the English countryside after the death of her husband James (Paapa Essiedu). Through flashbacks similar to those in "Annihilation," the film explores Harper's life with James in London leading up to his tragic demise. Much like the laws of nature start to break down in the Shimmer, "Men" takes a hard right into the surreal when Harper goes on holiday. Every man she meets in a nearby village has the same face as Geoffrey (Rory Kinnear), the owner of the house where she's staying. And that's when things get really strange.

Annihilation And Men Are 'Gut-Level' Films 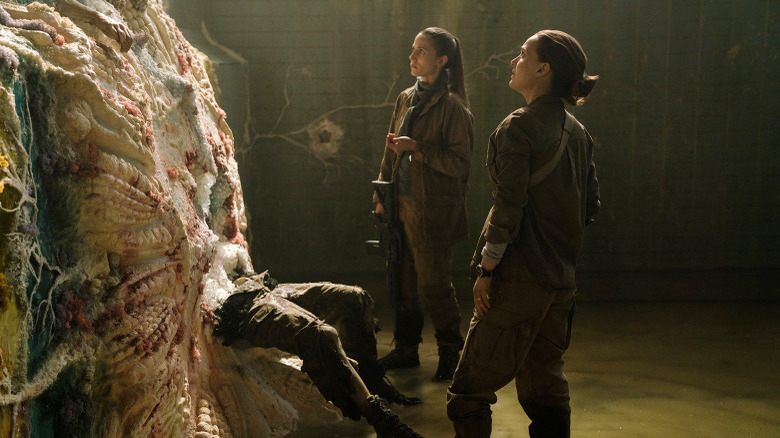 Alex Garland talked to Entertainment Weekly about the parallels between "Annihilation" and "Men," stating:

"In my mind, a film like 'Men' is connected to a film like 'Annihilation.' They're very much about how you're feeling about something. 'Men' is a gut-level film."

Video essayist Thomas Flight once compared "Annihilation" to the works of influential cosmic horror novelist and outspoken racist H.P. Lovecraft. Garland's film depicts other-worldly forces that are beyond human comprehension, similar to those Lovecraft would infamously refer to as being indescribable in his writing. As much as the characters in "Annihilation" speculate about the alien being that created the Shimmer after crashing on Earth, the movie never provides a firm explanation for how it operates or what it wants (assuming it "wants" anything, which Lena thinks it doesn't). This ambiguity leaves more room for audiences to feel out what the film is saying, so far as its themes about evolution and humanity's capacity for self-destruction are concerned.

Compare this to "Ex Machina." The film stars Domhnall Gleeson as Caleb Smith, a search engine programmer who is called upon by his company's CEO (Oscar Isaac) to give the Turing Test to Ava (Alicia Vikander), a new robot he's created, and see if she's capable of true thought and expression. Where you could ask any two people what "Annihilation" is about and come away with wildly different answers, "Ex Machina" is far more up-front about its sci-fi themes. It's just as overt in the way it examines masculinity, showing two scientific-minded men (one a schmuck, the other an eccentric with a dark side) studying and fixating on robots that are female by design. It's an excellent movie, but its approach is very different from that of "Men," as Garland himself will tell you:

Bringing Garland's Concerns To The Surface 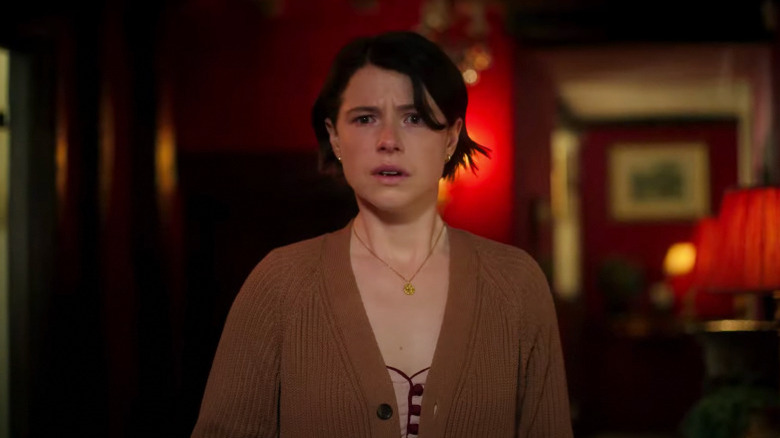 As much as Alex Garland's work deals with masculinity, it's usually not the topic du jour. Gender plays a role in the power dynamics of the not-so-utopian community at the heart of his debut novel, 1996's "The Beach," but it's not the chief focus. The same is true of "28 Days Later," which is primarily concerned with how society breaks down and reforms in the wake of a pandemic (a matter we're all worried about in 2022). Building upon "Ex Machina," "Annihilation" brings those concerns closer to the surface. The team that joins Lena on her journey into the Shimmer is composed entirely of women, whereas Kane's associates were all men. Then there's the way Lena is haunted by not just her own past actions but those of the men in her life.

Rather than trying to hide this, Garland decided it was best to make his intentions clear from the get-go with "Men," starting with its cheeky title:

"It comes up a lot, in different ways. With 'Men,' I just sort of thought, 'Screw it, I'm just gonna go straight into this.' Maybe it's just that with 'Men,' instead of running underneath, it sits there on the surface."

Where critics and audiences were mostly aligned in their opinions of "Ex Machina," there was a larger gulf between reviews for "Annihilation" and reactions from casual moviegoers (a polite way of calling it the d-word: divisive). Early signs suggest "Men" will accelerate this trend, with critics describing the movie as "both a straightforward horror film and something far more elusive [and] unclassifiable," as well as Garland's "weirdest" yet. Some have even gone so far as to predict it will "make people angry, at the very least," while at the same time assuring it extends Garland's streak of making "complex, fascinating, and layered genre stories that f*** with your head for days." But would you expect anything less from him at this point?

Read this next: 20 Movies About Time Travel Ranked Worst To Best