RHYS BOWEN: Cathy Ace is one of the most huggable people you'll ever meet. Of course as a fellow Welshwoman I have to think she's special but a lot of other people do too. So today I'm happy to host her on a momentous occasion:  I'll let her tell you about it.

Hello folks! Thanks for inviting me along today to invite all your lovely followers – and the Reds too, of course – to help me celebrate the tenth anniversary of the first Cait Morgan Mystery being published…just days before the 12th book in the series finds its way into the world. I’m feeling very grateful at the moment. 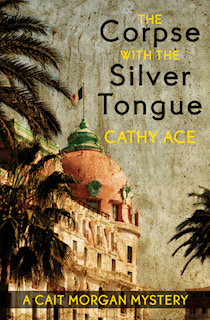 I truly cannot believe that an entire decade has whizzed by since I was launching my debut novel. Back then, I couldn’t have foreseen how the world would react to a small Canadian publisher putting out the first in a “planned” series of books featuring an older, definitely overweight, absolutely bossy, Welsh Canadian, globe-trotting professor of criminal psychology…so I’m delighted that it’s all gone so well in so many ways…though it’s been a bit of a bumpy ride at times. However, they say that what doesn’t kill you makes you stronger, so here I still am – and I’m a LOT stronger!

During ten years of ups and downs, I’ve been fortunate enough to have traveled to various conventions, where I believe I’m correct in saying I’ve met all the Reds. I’ll never forget the warmth shown to me by Rhys when we sat beside each other for a signing session at my very first convention (Bouchercon, in Albany): I signed none, because there weren’t any of my books there (long story, no need to whine here!) whereas she had a queue…and she was LOVELY. As was Hallie at the Surrey International Writers Conference, where we first shared a signing table (same thing as above, though maybe I signed one book?) and she was so kind to this new author. Hank, Rhys, and Hallie have all very kindly blurbed books for me over the years, too – thank you, ladies. (I don’t mean to leave out the other Reds, but will focus on what’s happened “so far”, LOL!) 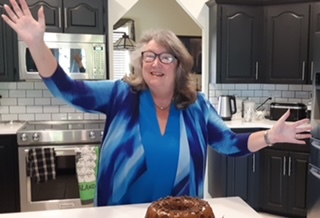 I’ll be celebrating this week with pink champagne and chocolate cake (baked by my Paul Hollywood-inspired husband – thank you Mr. Hollywood!). If you fancy raising a glass, or a forkful of something indulgent, let me provide you with this excuse! Oh, and the other thing I’m celebrating? The script for the pilot of the Cait Morgan TV series has turned out brilliantly! Originally planned as a 90-minute format, it’s been bumped up to two hours, which is fantastic. I’m not allowed to say much more, but can tell you it’s fascinating to see how a seasoned screenwriter is able to distill the essence of a novel’s story into a much shorter format – and they’ve done so without losing any of Cait’s personality, for which I’m most grateful. The casting is “in hand” (but I’m absolutely sworn to secrecy on that front) and I can confirm the settings will be authentic (Nice, France and Vancouver, Canada). It’s all so thrilling…and I’m making the most of every new experience.

When my debut novel was published, I didn’t realize it would be just as nerve-wracking every time a new book comes out, but it turns out it is…and I’m currently in knots about The Corpse with the Turquoise Toes. I plan to continue writing about Cait’s adventures; I really think there’s a place in the world for true closed circle mysteries being untangled by a not-so-amateur sleuth, and hope folks continue to enjoy reading them…and watching them, when they finally reach the screen.

Thanks for having me drop by today. I’m off to pop a cork now, and will invite you all to join me in a virtual toast: here’s to communities like JRW where – in a world that sometimes defies comprehension – we’re all able to celebrate the fact we know there are people out there like us…who enjoy a good murder mystery with clues, red herrings, denouements, and appropriate comeuppances! Cheers, Folks!

What will you be celebrating this week? And how will you do it? 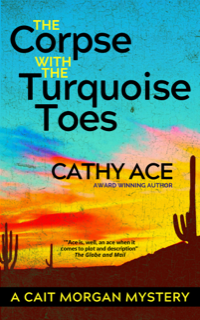 THE CORPSE WITH THE TURQUOISE TOES

Guests of honor at the opening of a swish new restaurant in Arizona, Welsh Canadian criminal psychologist sleuth Cait Morgan, and her retired-cop husband Bud Anderson, are looking forward to living in the lap of luxury for a week.

But an unexpected death at the desert retreat puts more than a wrinkle in their plans. Is the Faceting for Life movement, of which their host is a devotee, just a harmless framework for life-affirming activities, or a façade for a cult where no one is quite who they appear to be?

In the twelfth Cait Morgan Mystery, Cait and Bud arrive at their remote destination keen to relax and indulge, only to discover that Cait might have – for the first time in her life – truly met her match. And her adversary’s agenda? Well, it’s anything but restful…indeed, it’s both wicked, and deadly.

RHYS: We are raising a glass, dear Cathy. Long may you and Cait Morgan thrive!